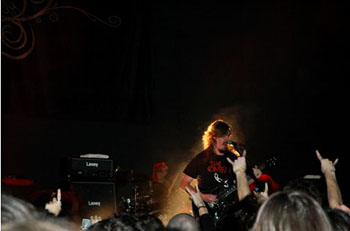 Opeth are a great example of a successful and hard working Metal band. This can be assumed not only from their releases, but also from the days they spend on the road performing the last seven years. On April 11th 2009, Opeth performed here in Greece offering a weird show, in terms of performance and attitude etc. Leaving a bittersweet promise for a better show next time. None knew that the next date with their Greek fans would be just few months later. So, on Friday 4th  of December , Opeth are back in Thessaloniki, to surprise us once more.

The intro track is on the speakers, the five gentlemen take their places on stage and a big show starts off, with acoustic masterpiece “Windowpane” from the highly anticipated “Damnation”. Weird beginning, although the audience seems to be quite satisfied. “Ghost Of Perdition” follows and next comes “Lotus Eaters” ,the first one from their latest release “Watershed”, and everyone in the crowd sings along every melodic part. A small black humor break from Mikael and the first past release stop of the evening, is called “Leper Affinity” from “Blackwater Park”. The audience is driven mad and a pit circle is formed, creating a beautiful atmosphere of a nice Death Metal live. Great performance and “April ethereal” that follows reminds us of the strong black metal elements this band once had. A well hidden treasure of their past releases this one, I should say. After this trip into the past,  “Hessian Peel” from “Watershed “ brings us back to the band’s present sound.

A small break and keyboard master, Mr. Per Wiberg, introduces us to another old song. The absolutely beautiful “Face Of Melinda” from “Still Life” in a great live version where the crowd sings along every lyric- placing this track to the highlight of this evening. Next comes “Harlequin Forest” a great and complex track from their 2005 release “Ghost Reveries” performed as beautifully as the original recording.

Another break and Mikael, as usual, takes the chance to have a chat with the crowd for one last time this evening, introducing us to what he called “a future classic” . “Hex Omega” from “Watershed” closes the main playlist of the show and Opeth get off stage, although everyone waited for another “classic” encore song…

The five gentlemen are back on stage, after a few minutes and Mikael introduces every member of the band, giving Fredrik Akesson the chance to unveil his guitar abilities, with a fast lead guitar solo that eventually led us to ”Deliverance” that gave a violent death metal ending to this great show.

Opeth really played a great show, performing as tight as a fist every second of their music. I should say, this line up is really the best they ever had. A mastermind frontman, with a weird sense of humor, a great lead guitarist, a monumental figure on the keys and there’s nothing to comment on Axe’s and Martin Mendez’s perfect music cooperation on drums and bass duties. Don’t ever miss them, if they happen to be near your town…