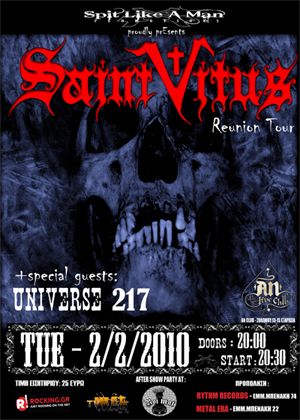 If Greece is supposed to really be the land of the Gods, then it was one of these nights that the gods stepped on the earth and made the weight of the worlf seem heavier than all problems, all mishappenings and all dark matters in life. Ladies and gentlemen, a memorable night took place in our country and it is me that must describe what happened without being subjective and with the less exaggerations possible.

The group that opened the show was the charismatic quartet of Universe217, which played for 40 minutes some great compositions. First of all, there has to be stated that if this band was from England or the States, all people would follow them blindly. Their music has everything. Experimentation, personal search within everybody’s self, a pounding rhythm section, riffs that fill the gaps where needed. And finally, the reincarnation of Janis Joplin if she sounded as if she hadn’t been doing drugs. I don’t get used to make personal references in band members, but this girl, surely has the gift. Her vocal width is unbelievable, she can sound either emotional or frenzied at the same moment. It is something you must see in order to believe it. Witness this band in every possible occasion. Words are pure to describe them, if I had a hat, I would surely take it of for you guys. Soul is above all in music and your hearts are full of it. Well done once again.

Only twenty minutes passed until the lights closed and what we came to Athens for, was at the stage ready to attack. Shortly after some problems in the drums that were successfully surpassed, Wino yells ”Kalispera Athina”. The wait is over and the first notes of ”Living Backwards” prepare the filled An Club for a night that in our hearts will never end. Just like in the record ”V”, the initial track is followed by ”I Bleed Black” and it feels like deja-vu to me, since this was exactly the way they started their show in France last June, where I had the luck to first see them.

After the shock, most people try to recover from what they have already seen. It is only the beginning and everyone feels weak to comprehend to reality. The riff of ”Clear Windowpane” breaks the silence violently and brings us back to earth, shortly followed by ”The War Starter”. The sound is incredible. The band in excellent shape and Dave Chandler proves why he is also a living legend, in his lazy style he can blow the world just with a single touch of his black guitar. Next is ”Look Behind You” and people really start losing it, so many classics in one night already, Saint Vitus play as if there is no tomorrow and ”The Game” makes matters worse (or better, depends from which side anybody would see it).

This moment, I will never forget… Wino says ”this is one of my personal favorites”, Chandler says ”I’ve been told that people in Athens are crazy so let’s see you in this one” and one of the two best tracks in Vitus history starts a violent but friendly pushing all over the club. ”White Stallions” is played in Athens, this isn’t happening. Schizophrenic reactions, filled with orgasmic screams and the band can’t believe their eyes. You can see the surprise in their faces, they probably didn’t expect such a warm welcome in a small country. We  probably didn’t expect a godly experience like this, so it was about time for a witchs song and ”Mystic Lady” eases things a bit.

Wino’s eyes are ready to go off, he was known for being a great riffer, but without the guitar in his hands, he OWNS every stage he could probably walk. Just by spreading his hands left and right, he closes all visual you could have and all you see is the passion in his face. A passion that becomes larger when he sings ”Saint Vitus”, the title track of the band and its first record. After this, the band leaves for a while but the crowd goes crazy shouting ”Vitus, Vitus, Vitus” and they return for one of the best encores I have ever seen in 17 years of metal and rock live appearances.

Probably the most recognizable track in their career, and surely my personal favorite is ”Dying Inside”. What I saw was beyond belief, EVERY single being singing the lyrics loud with passion, even the walls were shouting! A lifetime experience until you close your eyes. Live it to believe it. As it ends Chandler states: ”I have been doing this since 1979 and I have never seen something like this in my whole life. You are the best crowd we ever had”. Such a great recognition for us by a great musician means a lot. After some problems with the bass, ”Burial At Sea” puts an extra ton in our backs with its crawling atmosphere, making the dead come to life and the living lose their colour f skin.

At the end, ”Born Too Late” was the expected end, again everybody singing and the band witnesses its pure praise after the end of the song. They greet us and invite us to Roi Mat club next door for drinks, signatures, photos etc. But shortly after this, followed a surprise, as the band called Violet Vortex, known for their Saint Vitus worship, perform with Wino on the vocals two legendary covers by The Obsessed and Pentagram. Wino states ”it’s an honour and a pleasure for me” showing what musicians should be like. He greets the Vortex members personally after the end and invites us himself to the next door club, where they later enjoyed the love of Greek fans.

In overall, as this was the first show of their European tour, Saint Vitus managed to show not only that they are alive, but also that they are an unstoppable force that would never get affected by time, trends or media. On behalf of all that came to the show, all that have listened to your music and all that admire honesty, thank you Saint Vitus for doing us this honour. For almost three decades of offer and for being who you are. In a world that lies take over everything, the truth lies in Saint Vitus. Period.