The day none of us will never forget, is the day that the truest band of all times in music history stepped its feet in the hallowed Greek ground. And it was the city of Thessaloniki that had the honor to host the first Bolt Thrower in Greece. The best metal concert of all times in the history of the bride of the North, as people tend to call the second city of our country. What we witnessed was beyond any logic, any feeling and any expectations. It’s still very difficult to comprehend and be able to put in simple words the size of our surprise, shock and happiness during and after the show, that we might seem over-reactive. Believe it or not, we are not!

Mass Infection was the band that started the show, and little things changed since I last saw them supporting Behemoth some months ago. The fact that they were much better, might have its roots on the very good sound they had, plus the fact that nonetheless, they had to prove they were capable of filling the shoes of a group supporting such a colossus like Bolt Thrower. They played nine songs, including the cover of ”The Will To Kill” by Malevolent Creation, and truly no fan realizes how quick and creatively time passed. With such shows and songs, the future belongs to them undoubtedly! Total affinity and professionalism, hats off!

Terrordrome were either with Mass Infection supporting Behemoth, only this time they played after them. Also as their friends before, they were much better, with their sound being a little more bassy, as the drummer had already informed me before they start. Phenomenal playing, their Dying Fetus meets Origin meets Necrophagist meets anything American in general style, was produced with profound rage and technique, many fans got dizzy trying to follow the guitar player’s left hand going up and down, while the rhythm section devastated everything. I am proud as a Greek for both bands. Hard work is what they both represent and their new songs kick serious ass, evolution 1000%!

On the 29th of May in 1453, the city of Constantinople, fell into the Muslim’s hands. On the 29th of May in 2010, Thessaloniki surrendered under the heavy artillery of Bolt Thrower. And no song could start this declaration better, than ”The IVth Crusade”. As soon as the initial riff took place, Everyone realized it was going to be a night with no end. ”Rebirth Of Humanity” is what we call surprise wild card, none of us expected it for sure, and the title track from ”Mercenary” was produced about twice faster. The sound does miracles and the British are unleashed, firing without mercy, executing what’s moving or has stayed still. 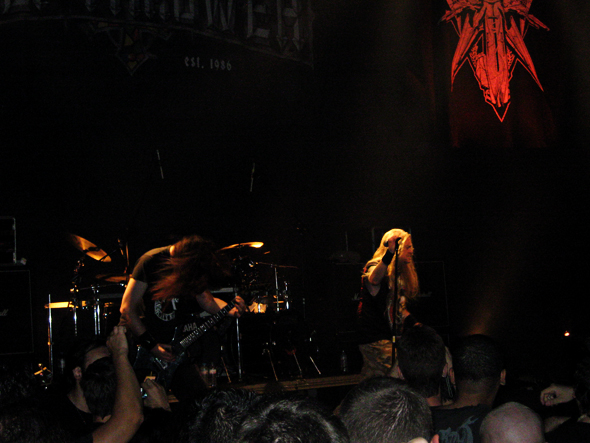 All these takes place ”At First Light”, despite the fact everything seems so dark and there is no way out. ”World Eater” proves that this is a WAR without end, frenzied fans jump off the stage every 20 seconds, accompanied by the security people, calling them to dive into the crowd, and to make matters worse, as the song ends, the battle cry ”CENOTAAAAAAPH” leaves no mark of hope for about 700 people inside Principal. We’re going to die, but until then we’re going to enjoy it also. I haven’t seen such urge from fans since Slayer in 1998 in this city, it’s unbelievable how much will to see the band existed. Bolt Thrower can’t hide their smiles and the show goes on, seeming like it’s never going to end.

Things might seem to ease a bit with ”Anti-Tank (Dead Armour)”, but then comes a moment I always wanted to live before I die, as the best Bolt Thrower song ”When Glory Beckons” tears my soul apart and the rest people’s heads from their shoulders, how can it be such brilliance combined with obsession? Lucky bastards we are, that’s what comes to my mind as ”Salvo” interrupts my thoughts, and then comes the old school moment, where the title track from the first album ”In Battle There Is No Law” devastates the place for good. There is no turning back, Bolt Thrower will take our corpses as trophies back to England.

The dynamic duo of ”The Killchain” together with ”Powder Burns” (again twice faster) brings the groove inside the club and Karl Willets smiles so much, like he’s happy with all of us unable to resist him and his fellows. Jo Bench is the sister we all would like to have, she’s younger than all of us, while Martin Kearns proves why they chose him to replace the mighty Andy Whale behind the drum-kit. Barry Thompson and Gavin Ward are the main responsible for our nightmares, as they feed us riffs with no pause, and as Karl says ”Bolt Thrower are proud to have you as fans”, ”Pride” marks the last song of the normal set, before the dreamy encore.

About five minutes pass before the sounds of ”War” prepare us for ”Remembrance”, a large moshpit takes place in harmony, all the club goes up and down and we all wait for the glorious ending, which couldn’t be anything else but ”…For Victory”. I see people getting crazy, I see people cry, I see people embrace each other and sing. I am dreaming for sure, it’s just not real. Bolt Thrower wave goodbye to us in pure emotion, another victory in another country for the band. There is no war they can’t win, they are the ultimate army whose side we all must choose. Long live the truth itself, they are nothing less than that. Preparation for Athens was set.

Inveracity were the first to open the show. The best sound I have heard in a Greek support group for many years. They have become so gigantic that I barely recognized them, absolute domination of a crowd waiting to see Bolt Thrower. There mustn’t be many not to admit that they were almost perfect, the drummer seemed he could build a whole block with his playing, the guitar sound was massive, the vocalist growling with passion and certain attitude. A great appearance by a band that has a lot to offer to our extreme music scene. I hope they have overcome all difficulties of the past. If so, nothing will stand in their way! I’m by your side!

For those who say Suicidal Angels are going to be the next big thing in Greek music: you are all wrong! They already are! They seem as if they were born ready for the moment their dreams would be fulfilled and they offer lessons of pure thrash feeling, with the guitars being the guiding force of their mosh-creating music, and the rhythm section doing miracles, especially the drummer is the epitome of a thrash player, hitting everything like a maniac, in the American style. It’s like seeing Kreator with a drummer playing for Overkill for example. What a combination! Nuclear Blast can’t be wrong, our ears can’t be wrong. The next album is going to be the best, period.

As far as Bolt Thrower are concerned, there were no big differences compared to Thessaloniki. The crowd was more but not as good, it’s the first time in my life I see thrashers unable to do a good moshpit, hitting each other without reason, or diving off the stage with their feet in the front (!!!). Thessaloniki fans beat the shit out of Athenians by far, but in the capital of Greece, there was a definite sold out, bringing the match into a tie. The British GODS couldn’t believe their eyes from the first moment, as what they saw was the ultimate recognition of their two and a half decades offer in our beloved metal music.

The setlist was exactly the same, but in Athens they also played ”This Time It’s War” in the end, after ”…For Victory”, as a gift for the continual screams and acceptance of the crowd (something that should have surely happened in Thessaloniki also, but let’s just not be full of complaints). All fans I saw in front of me were mumbling it was the best show they had ever seen. Today, a week after the massacre, we all believe the same thing. We are now sure it was not a dream and we are most certain that if Hell might be somehow like this, none of us will ever want to go to Heaven. Target locked: FIRE!