Have you ever had the feeling that something heavy is pounded on your chest, right in the place where the heart beats and it doesn’t leave you breathe properly? Have you ever felt that despite knowing this is an uneasy situation, in the end of the course there’s a wicked smile on your face because you simply enjoyed it? Well, somehow like this is how things turned up after the gig of three different but great bands on that Sunday night in Athens. 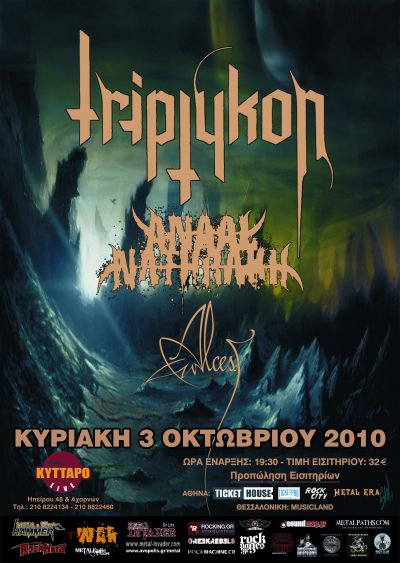 Alcest opened the show, having a great sound and playing very good the demanding compositions they have created the last five years. Being always a one man band, it was a big deal to see how the rest of the line-up would help Neige on guitar and vocals. With great joy we all realised that we witnessed something that we probably will never see again. Beautiful music, played directly, with some people getting obsessed and moved and some others feeling a little tired after the middle of the show. In any case, Alcest is a band you all must discover.

Anaal Nathrakh made the gig of their lifes. DEFINITELY! This violent, hateful, anarchistic sound found its best response to the Athenian crowd, with the title track from their latest release ”In The Constellation Of The Black Widow” opening the massacre. For the next 60 minutes, all hell broke loose with tunes such as ”Submission Is For The Weak”, ”More Of Fire Than Blood”, ”The Lucifer Effect”, ”Der Hölle Rache Kocht In Meinem Herzen”, ”When The Lion Devours Both Dragon And Child” and of course ”The Codex Necro” and ”Do Not Speak”.

I am pretty sure that the band members didn’t believe what they saw, there was a part where seven people had a great stagedive (together) and V.I.T.R.I.O.L. stated that if there was a way that this tour would end and leave them satisfied, it would be like in Athens, thanking us a million times and really having nothing to say from a point and on. They destroyed the place and they prepared the ground for what they said ”Death itself”, characterizing Triptykon more suitably than expected.

While Anaal Nathrakh were playing, somebody said ”Is there anyway Triptykon can sound better than this?”, I am pretty sure that he has regreted it so far. For what we saw, simply cannot be described. Entering with a very slow, a very heavy and a very unique ”Procreation Of The Wicked”, with a sound coming from the depths of darkness, loud as fuck and ear-bleeding, the course was set. Whatever followed, was under a pitch black colour, surrounding the whole place. Total absence of light, hope and future.

”Goetia” sounds so gigantic that proves the best way Triptykon have released the best album of the year (”Eparistera Daimones”). Next to come is the Celtic Frost anthem ”Circle Of The Tyrants” and moshpit massacre is created once again. ”Babylon Fell (Jade Serpent)” was the best surprise of all times in a live gig for me, even for this one it was worth coming to see the show. Simply amazing, with ”Abyss Within My Soul”, my favourite Triptykon tune following and blackening even the most single part of the club.

It is most certain that tunes like ”Dethroned Emperor” make the weight of the world seem heavier in every riff, only with the difference that Thomas Gabriel Fischer is THE enthroned emperor in our hearts, especially when laughing just to make us chill, just to see how he enjoys it and how he loves us (because he really does, he stated that one of the best Celtic Frost shows was in Athens and that he’s very grateful for that). ”In Shrouds Decayed” only made matters worse as the main part of the set was off.