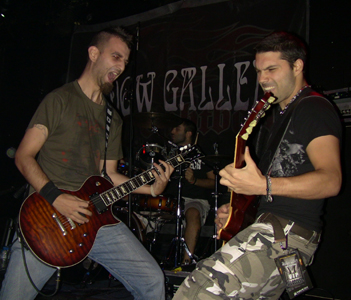 This year has it all I guess. It cannot be explained otherwise that we even had the chance to see a legendary group that decided to play its first gigs since the release of their first same titled album in 1992. This makes us feel much more fortunate, as the group wanted desperately to play in Greece, in return to the constant response from the Greek fans from the beginning. In the end of the show, we had the luck to say that it was one of these lifetime experiences that happen only once. Not only because of their outstanding performance, but also because we could see on their faces that they really enjoyed it and it was a situation where all sides were more than satisfied in the end.

Maplerun proved their worth in the 45 minutes they played. It was not by luck that they had the honour to support Shadow Gallery, we all saw a very tight band, delivering nine songs of pure modern molten metal, with references to Godsmack, System Of A Down and a little touch from groove gods like Pantera and Machine Head. These guys work hard and above all, they give 101% of their skills. The crowd embraced them and had the luck to see one of the best Greek support bands of all time. They presented songs from their only album so far called ”House On Fire”, plus some newer ones, with some Tool feeling on them. Not a static band, they walk every edge of the stage. The bassist plays with his bass held up high, the two guitar players bang their heads relentlessly and the drummer plays like there’s no tomorrow. Excellent in every sense of the word. With performances like this one, if they are a little lucky, they will achieve the big bet. The basis is set perfectly. Well done guys, you rule. 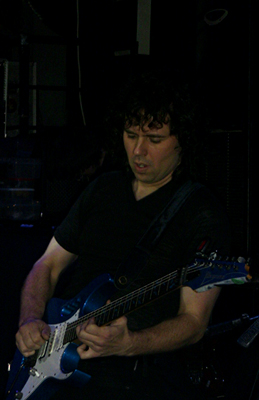 Shadow Gallery enter the gig with need to overtake the crowd from the start, something that was proved very easy for them, as the sounds of ”Stilleto In The Sand” tear the air, and before we realise what happens and before start complaining about the sound, ”War For Sale” makes the people go nuts. First thing we see is the surprise in their faces, I don’t know if they waited such a welcome, but especially guitarist Brendt Allman who was right in front of me, couldn’t stop smiling and joking to the people until the end of the night. Bassist Carl Cadden-James stands in the middle and Gary Wehrkamp draws pictures full of colours in his keyboards when he’s not playing guitar. Joe Nevollo on drums proves he’s one of the best drummers ever. Accompanied by a young guy named Eric on keyboards, we witness a masterpiece.

”Mystery” makes matters even better, as it’s one of the best and most favourite songs of the band, shortly to be followed by ”Deeper Than Life”. And it is there that we realise that the new vocalist Brian Ashland is the right person in the right place. Very communicative with the fans, also playing some riffs while the others burst into chaotic atmosphere. I don’t know where they found him but I know he was a great choice. The band is tight like a bond, and the new song ”Pain” from ”Digital Ghosts” makes us think a little of Mike Baker, only to be mentioned by Carl a little later and all the people show that they didn’t forget a gifted and sincere musician. ”Destination Unknown” from ”Legacy” is a warm song full of feeling, Ashland does great on it also and ”Questions At Hand” proves what Brendt Allman said before, that they’re going to play songs from all albums, representing the debut of the band and making jaws drop to the floor with its powerful riff.

Next is ”Ghost Of A Chance” from ”Tyranny” again, which ends the songs played from this album, leaving room for the band to make fans insane. Gary Wehrkamp switches and sits on the drum kit. ”Digital Ghost” begins and Gary starts an insane drum solo, proving that he can play everything. 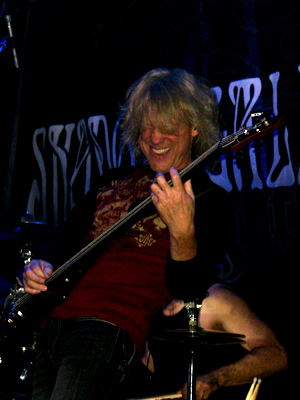 He’s followed by Brian Ashland’s guitar solo. This guy has helped the band so much, they all seem so free in their expression. ”Strong” starts and Joe Nevollo takes the place that belongs to him. For the next minutes, he makes the crowd yell, he plays with sparkling drum sticks in a moment, then he stands up and he even hits the microphone. An all sound experience, he even hit the stage floor to create sound. He returns to his place and the song is completed with the fans astonished in all ways. This isn’t real at all.

It was time for the album ”Room V” to be represented with ”The Andromeda Strain”, a very progressive tune that prepares the ground for the most touching moment of the gig. It couldn’t be anything else but ”Crystalline Dream”, with the one writing this one trying in vain to hold his tears and ALL attenders being an extra instrument to Brian’s help. It is real and it is happening… The band knows they are the kings of the night, so the only thing they do at first is play the new track ”Haunted”, just to leave us impatient scream for them to come out again and finish what they started 90 minutes ago. And of course they returned to play two more songs, with Brian Ashland coming down to the crowd (!!!!) to sing ”Room V”. He is embraced by people and a bright smile shines the whole place, not only his face.

”Gold Dust” again from the new album closes the night and after 105 minutes, the band members witness the LOVE of Greek fans that can’t stop shouting for more. Unfortunately it was the end, however, it was just the beginning of what followed later, with all Shadow Gallery hanging out with the fans, enjoying the warmth of their welcome here, signing staff, explaining details of the past and the future, and generally having a great time, as the party went on and on. I only have to say that they make their friend Mike Baker proud with their attitude, both as humans and artists and they keep his spirit alive in the best and most decent way. Thank God for Shadow Gallery. This crystalline dream is unbroken, untouched and unreachable from anyone. We will always remember you, we hope you do the same for us too.