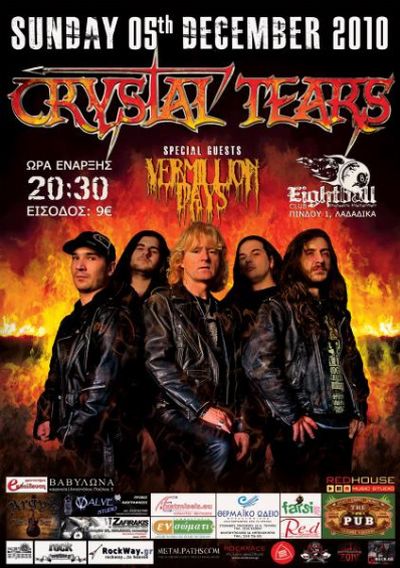 It was a good chance to see two bands that represent two different generations in the metal scene of the city of Thessaloniki. On the one hand we had Vermillion Days which is a band consisting of teenagers who sound like grown men and on the other hand we had the experienced pioneers Crystal Tears which had the opportunity to play a show promoting the new album “Generation X”. Despite the fact that the city was celebrating with various occasions and the buses not being frequently available, this didn’t prevent about 250 people to show up and witness a great show.

Vermillion Days are the proof that age doesn’t matter when it comes to music. They seem to be the new hope of our country regarding thrash metal and they will surely achieve something special one day if they go on like this. They are all very good players and they seem to have the right influences and inspirations to become the next big deal. Especially when they cover songs like Testament’s “Over The Wall” with success they have nothing to fear but only the dark side of their selves. Worthy once again they prepared the ground for the headliners of the night. Thumbs up!

Crystal Tears have always been one of the bands that first used to work hard and then talk. At last they seem to enjoy some of the acceptance they should have more than ten years ago and this is something that does justice even in the fall of 2010. None can dispute that the wild card of the band is the singer Ian Parry. If this guy is in late 40’s years old then I’m an astronaut. Not only he doesn’t seem to be affected by the marks of time on his face but he is also a great example of a man that lives and enjoys his life until the last second.

They played about an hour songs from their latest release such as the video clip track “Nightmare Serenade” or “The X Generation” and even tracks from their early work “Choirs Of Immortal” such as “Megas Alexandros”. The crowd showed that was very pleased and they had a lot of fun in that silent Sunday night. The show closed with “Rock Until We Fall” which is a trademark song written by Chrisafis Tantanozis, the drummer of the band and performed by many musicians of the city many years ago. The sound was great in both bands especially the drummers broke everything and we had the luck to listen to the vocals absolutely clearly. We hope for such gigs near in the future as we have to support our local bands and maybe enable them to have a brighter look in the future. Thanks to both bands for filling our night in the best way they could.