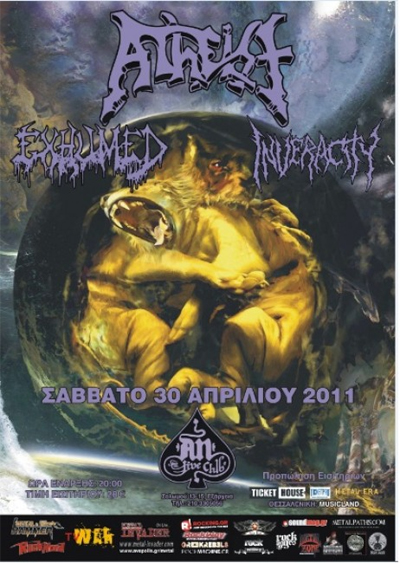 It’s been five long years since the reformation of the mighty Atheist, we also had the luck to see them live then and we never really thought we would see them again. It’s one of these times in life when you are happy to be wrong, because the American force not only continued as a full time band, but they also offered us the best album of the previous year called ”Jupiter”. This time they played only in Athens and it saddens me to say, but I think that many fans in the capital of Greece don’t know what they want, for there were only about 200 people inside. However, they managed to make the band more than welcome and to remember this show for years.

Inveracity were the lucky ones to open the show, not being able to play for about a year, since I last saw them with Bolt Thrower. Even better performance, with the sound helping them a lot (quite strange that all the bands had such sound, especially in An Club) they gave a blasting performance that lasted about 40 minutes. Covering their past and playing one great new song from their soon to be upcoming album, they proved once again that they are a valuable source for the Greek metal scene in general and that they deserve supporting such groups several times. Let’s hope that their new album will be like the new song they played, it will surely kick serious ass. No shit!

Exhumed had always been a bunch of crazy motherfuckers, torturing their instruments to the limit, grinding their way to become one of the best groups we have ever seen in Greece. With songs covering their whole career, from the ”Excreting Innards” EP to their new upcoming album ”All Guts, No Glory” which will be out in two months, they fucked shit up and they made us wonder how much better Atheist could be later. Blast-beating double voice attack, accompanied by crazy extreme riffs and some gory sense of humor. The crowd went completely nuts and we already wish to see them again in the near future. Honest, brutal and hella players. Gore fucking done dudes.

Atheist remembered Greece as one of the best places they had ever been, Kelly Shaefer made sure to state this before the first beatings of ”Unquestionable Presence” tore the air, with Steve Flynn smashing everything he could find in front of him. Even now, it seems like he’s somewhere close to me and he still beats the shit out of his drumkit. ”On They Slay” caused some serious movement inside the club and ”Second To Sun” proved why ”Jupiter” is already a colossal album. ”Mineral” closed a suite where all albums were already represented, with Chris Baker having the fun of his life and the two newcomers Jonathan Thompson and Travis Morgan showing us why they belong to the Atheist family. Outstanding players all of them.

Another new one with ”Fraudulent Cloth” and some changes through ”Jupiter” to ”Unquestionable Presence” take place with ”An Incarnation’s Dream” being followed by ”Live And Live Again” and ”Your Life’s Retribution”. Kelly stated that there’s something special in the Greek ”Air” that’s why he dedicated the song to us, before they play one of the craziest and sickest songs ever, just like he said, meaning ”Mother Man”. They left the best for the end with ”Faux King Christ” and the immortal, legendary, unrepeated ”Piece Of Time”. Even the guys from Exhumed managed to stage dive, showing that they had a great time with the headliners.

What made things memorable was the fact that the band showed every passing minute its joy for being in Greece. Kelly was in perfect shape and mood, making either jokes or statements such as ”There’s no need for drinking, some pot and mineral water is what makes Atheist produce what they do all these years”. They stayed and signed for all fans after the show with the best possible attitude, showing that you can gain respect without being a rock star. Total family atmosphere between the fans and the bands, with the Exhumed guys having a lot of fun before and after the show. We wish the best to both bands, may every concert have the vibe of this one, with some more people included of course.