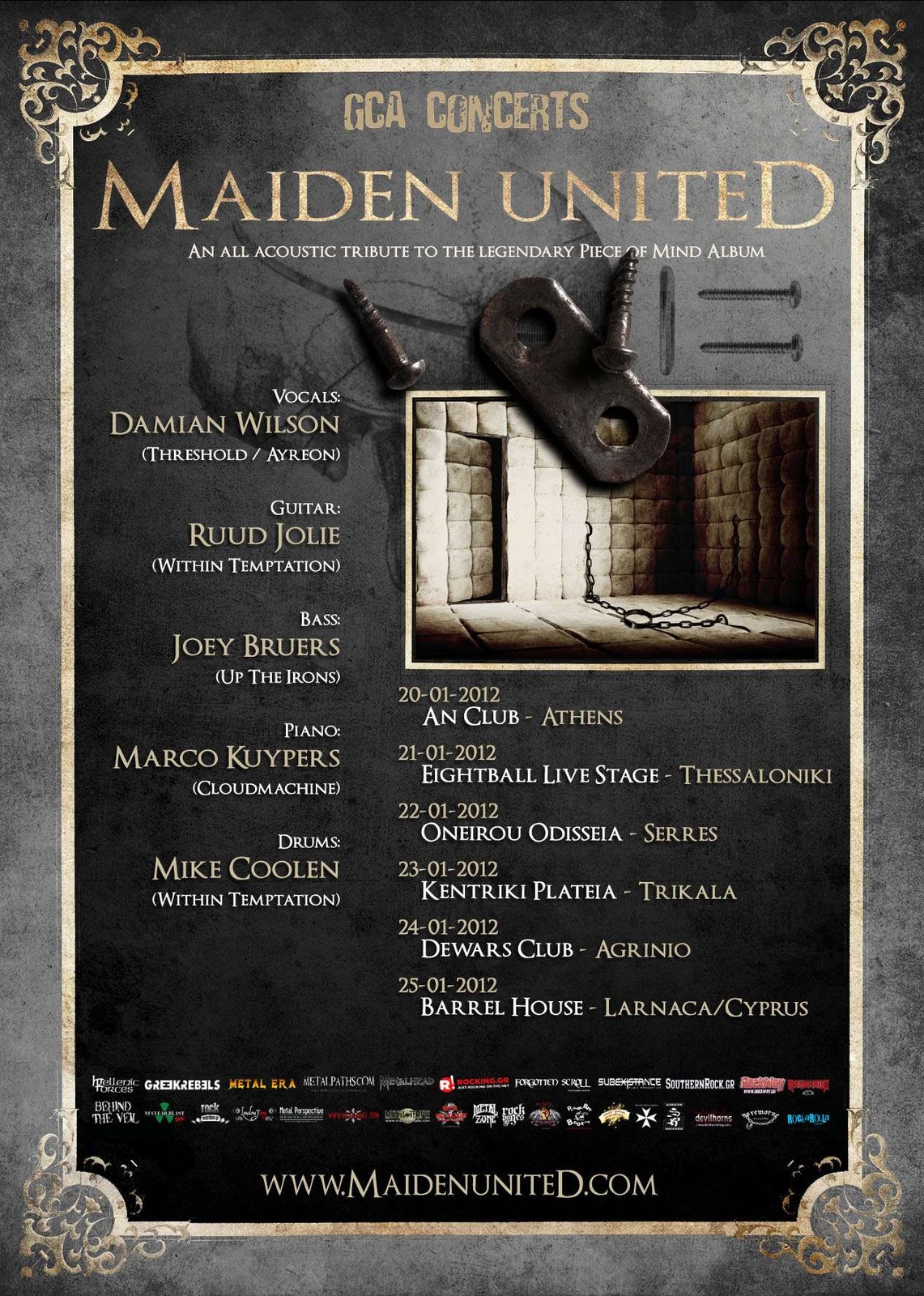 I don’t know how many of you had the chance to say such a thing in your life, but I am pretty sure that whenever I am able to attend a fully acoustic show, I will have such fun that it might surpass even an occasion with plugs in and generally a more heavy atmosphere. In this case, the coming of the super tribute band Maiden United was something I wouldn’t miss, even with Arch Enemy having a show the same day in the city of Thessaloniki. The reasons were simple, much cheaper ticket, a kind of certainty that the gig would be great (as it really was in the end) and with the proof of the band’s first release ”Mind The Acoustic Pieces” where they play the whole classic ”Piece Of Mind” album by Iron Maiden in unplugged versions, made things much easier in deciding to go to Eightball club once again. They were not on their own though, as there were also two other bands opening for them that Saturday night.

Until Rain is a band I have seen many times on stage. Experienced and with a certain aspect in their music, I must insist though that whenever I see them playing an acoustic show, they really sound like another band. The lyricism and melody included on their music seems to work better on such cases, as the result was pretty much the same as the last time I saw them in an acoustic set, supporting Jeff Martin (ex The Tea Party). For about half an hour, the guys (minus their drummer this time) managed to give a great performance, and they showed once again that whenever they choose to have some covers on their set, the result is ALWAYS better. This time they included ”Walk In The Shadows” by Queensryche (thumbs up for the choice, rather difficult one) and they closed the set with ”Edge Of Thorns”, which also happens to be my favourite Savatage track of all times. Once again the singer gave singing lessons and with joy I declare they were much better than the last time I saw them. May they ever play in such a shape. Well done.

Meden Agan was the second band to play and it was their first show in Thessaloniki ever. Their female fronted style has a lot to give, as it doesn’t have many differences compared to their original tunes. The band showed determined to win the impressions from the beginning and the smiles of the lady on the vocals made things even better, with her thanking the crowd for the response during and after each song. They also played two covers in the end, with the help of another lady from Thessaloniki, with ”Stand My Ground” by Within Temptation and ”Sleeping Sun” by Nightwish (the good old ones…) being performed in great interpretations. The band was also great as Until Rain and we couldn’t wish for more to get warmed up. They play again as a support band for Tarja Turunen in a few days, so go and enjoy them once more.

Maiden United is not only a great tribute Iron Maiden band, but also a band to play tracks you may never listen again in a concert by one of the two greatest metal bands in heavy metal. Starting with ”Revelations” and continuing with tracks from their latest album, like ”Where Eagles Dare” and ”Quest For Fire”, one thing is certain from the very beginning. Damian Wilson OWNS Bruce Dickinson for good and it is really incomprehensible how he didn’t finally sing for the band back in ’94-’95…The band told us they are about to release a new album around September and tracks like ”2 Minutes To Midnight” or ”22 Acacia Avenue”, ”Prowler”, ”Only The Good Die Young”, ”Flash Of The Blade”, ”Children Of The Damned” and ”The Evil That Men Do” made us already eager for this new release. Of course they played tracks such as ”Die With Your Boots On”, ”Sun And Steel”, ”The Trooper” and ”To Tame A Land” and they closed the set with ”Wasted Years”, after an hour and a half where they presented us fourteen glorious tracks of the past.

It is no secret that Wilson is the wild card of the band, not hesitating to sing around the attenders, coming down on the main hall and even climbing on the bars of the club to greet the fans that were sitting on the upper level. Such an energetic and well mooded person that you feel shame when it comes to terms to say you’re not in the mood of doing anything. The rest of the band supporting him and paying a real tribute to these compositions, done with love and respect, something which shows without anyone having to acknowledge it. They told us that they are really looking forward to coming to Greece again and believe me, not a single one that came to the show (even if it was less than a hundred people unfortunately) will not also see them the next time. What others do for money and publicity, Maiden United do for respect and love to something they believe. We hope the next time it would be possible to play ”Alexander The Great” which always remains the big request of the Greek fans. Until then, up the united!