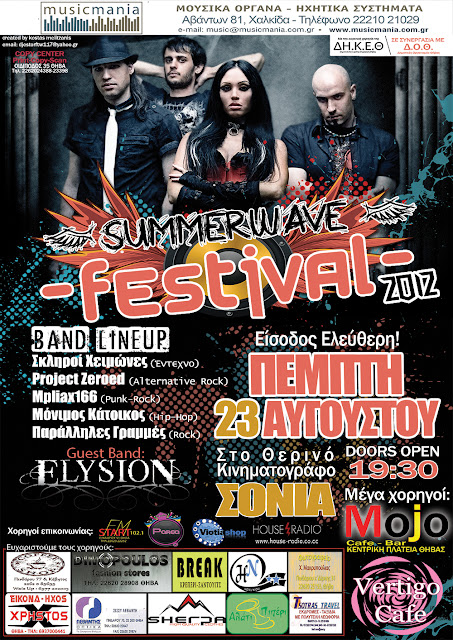 Summerwave Festival opened its gates in the city of Thiva for the fourth consequent time. This time, our readers’ interest exclusively concerns the guest band, Elysion, due to the fact that all other bands performing belong to totally different musical areas.

Elysion, one of the most well-known Greek bands today, set foot on stage at 22.45′, presenting a 45-minute set comprising of songs taken off their first album, “Silent Scr3am”, a new song, “Made Of Lies”, which will be included in their album to come as well as their favorite Rammstein cover, “Mein Herz Brennt”. Throughout their entire appearance Elysion showed a remarkable bonding; it’s a band consisting of musicians that can be characterized as experienced; especially guitarist and songwriter Johnny Zero (he has also played with a number of well-known local acts).

Not a packed venue unfortunately; some spectators have already started to leave and there weren’t more than fifty people at the end of Elysion’s performance. It was probably that factor (along with the heat) that may have affected the band and mainly Christianna, who couldn’t reach the level of previous performances, unable to avoid some minor mistakes. I would consider “Killing My Dreams”, an amazing song and “Silent Scr3am” hit as their best moment during their set.

I do not think that Elysion’s whole image was smudged; they finished their set with “The Rules”, adding another good performance to their portfolio. We will be present at their next gig, along with Anneke Van Giersbergen, next November in Athens, expecting even more of course.