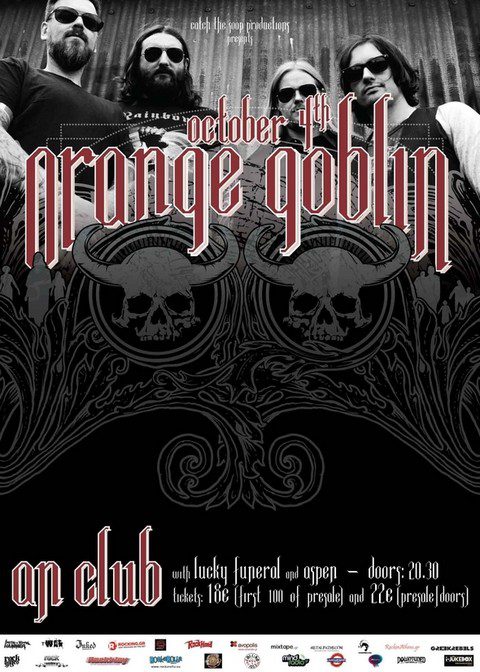 Twelve days after the shock with Amenra, it was time to return to the place of the crime (An Club) with the same promoters (CTS Productions) for a heavy night in the Animal World Celebration Day. Yes friends, the day dedicated to the animals was the day we would witness one of the best live bands I’ve witnessed the last ten years, being the third time I had such luck. I was there on April 13th 2002, on their first visit ever on the ”Coup De Grace” tour. Still remembering their furious performance, seven years later I saw them raising hell on Hellfest, France and as our people say, ”third time is always better”, so this was definitely the best (and longest) Orange Goblin performance I have witnessed. No surprise about it, just a big smile on my face in the end of the night, count some hundreds more and you understand what happened.

Aspen from Portugal was the band that opened the show. Filled with large amounts of energy, kinda neurotic but skilled players, they managed to warm up the crowd for about half an hour. The minimal drum set and the drummer’s amazing technique (though he seemed playing sloppy, he surely didn’t) and the Cathedral meets Karma To Burn approach of the band (an instrumental trio without vocals is SURELY influenced by the American rednecks) found the fans enjoying their fiery performance very much. Just declaring their name and origin and raising a can of beer to greet us, they played six songs if I counted right, mainly from the album ”Winds Of Revenge”. It’s a digital album but if you search thoroughly, you may find it and download it, unless you want to buy it of course. It’s worth the try or any possible deposit.

Lucky Funeral have many fans in our country. They got the attention they deserved with their two full length albums (the first self titled one and ”The Dirty History Of Mankind”) and they are on the process of completing their third one, that’s the reason they were one year off gigs as singer Mike stated. They played three new tracks in the end of their performance which lasted 45 minutes, which show a more experimental and rocking side of the band. The groove’s still there and it will be interesting to see what’s about to come. Before this, they played tracks known and loved to their fans. It was the first time I see them in a small club, so I had the chance to admire the opposition of the lazy style of the guitarist and the energetic style of the bassist, combined to the pounding drum help from behind and of course, Mike is a plethora on his own. Pretty tied up (not the G’N’R style) as a band, they showed that the absence of the scene keeps them hungry for riffs and sweaty gigs. The desert was enjoyed on it’s whole, time for the maind dish.

Orange Goblin are proud children of England, with a good sense of humour (”we’re supposed to have an encore but the dressing room’s half a mile away, so we’re staying where we are” just before the three final tracks). If that’s hard to find, it’s even harder to be able raising hell in every given chance. Coincidence is welcomed when it’s good, but establishment shuts mouths and lobotomizes each wannabee clueless fuck that may state something negative about them. Sixteen tracks, eighty minutes, four fucking masters of groove and uncontrolled Greeks inside An Club, total win from the beginning with ”Red Tide Rising”, ”The Filthy And The Few” and ”The Ballad Of Solomon Eagle”. ”Time Travelling Blues” starts making things serious, those never seen the band start witnessing something they didn’t expect, the power quartet does miracles on the stage and especially bassist Martyn Millard on his Slayer shirt bangs like a thrasher in the ’70s. What could go better than that?

”The Fog” creates a large circle pit inside the club, ”Some You Win, Some You Lose” is a panic on its own, I find myself from the left edge to the right and backwards, ”Round Up The Horses”’ prepares the ground for ”Aquatic Fanatic”, the only track played from debut ”Frequencies From Planet Ten”. ”Cities Of Frost”, ”Acid Trial”, ”They Come Back” and ”Stand For Something” simply make Ben Ward applause the crowd and state ”Greece is always the best crowd, but this day it’s the best crowd ever. We know what you’ve been through and just to know, we’re totally with you”. This creates hysteria, but no more than ”Blue Snow” which is the last track before they humilitate the meaning of the encore (check above if you missed the part). Three to go so, ”Quincy The Pigboy”, 1-0 for the band, ”The Death Of Aquarius”, 2-0 shortly enough, ”Scorpionica” just before the previous track ends. 3-0, all losers may go home now. Guess what, everyone felt like a winner this day, We must definitely mention all great stagedives that took part like we were in a thrash gig or something and the smiles on the faces of the band members. Something tells me they’ll come back soon. I wish I could attend the aftershow party, something tells me the ones that went there had hell of a night. Next time definitely!