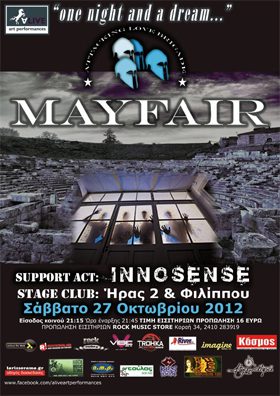 I have been listening to the Austrian dark prog metallers, Mayfair for a long time so I was very pleased when I heard that they will come to my hometown, Larissa, for a gig. They have released three studio albums and then split up. After some line up changes and with the addition of Johannes Leierer on bass and Jolly on drums they will be playing some shows and are writing songs for a full-length album. I got to know them a little the night before the show at the pre-show party at Stones rock bar and they seem pretty cool and funny guys.

The truth is that Mayfair is not a mainstream band like Dream Theater or Fates Warning, so my expectations for the crowd attendance were really low. I got to Stage Club and waited for the doors to open with an anxiety about how Mayfair would sound live.

The doors opened and we got in. At the beginning there were not too many people but after a while Stage Club had about 100 persons waiting for the show to start.

Innosense, a melodic prog band from Larissa opened the show at 22:00. I think that they were the best option for support act, because the combine well with Mayfair’s sound, having a melancholic tune in most of their songs. I have seen them live many times and it’s definitely an act you can’t miss if you are into prog metal. They started with ‘At The Edge Of The World’ and continued with ‘On and On’. They mostly played songs from their debut album ‘Outcast’ with an exception of ‘Seasons Of Oblivion’. The band was in good shape sounding almost perfect, balancing between their more emotional songs like ‘Mystify’ or ‘Where Darkest Thoughts Prevailed’ and more aggressive songs like ‘Revolution Rise’ and ‘The Cradle Of My Soul’. Vasilis Georgiou (Sunburst, Black Fate) gained the attention of the crowd with his charismatic voice which reminds of Roy Khan and Ray Alder. They even played a Conception cover, the exceptional ‘Roll The Fire’. They closed their show with ‘The Fall’ after about 50 minutes leaving the stage for Mayfair to come up.

Setlist:
At The Edge Of The World / On And On / Revolution Rise / Utopia / Where Darkest Thoughts / Roll The Fire (Conception) / Mystify / Release / The Cradle Of My Soul / The Fall 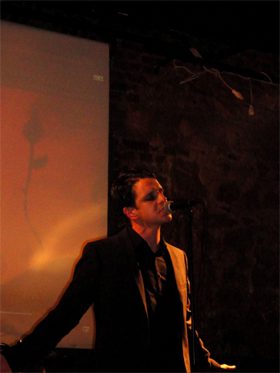 the stage last and leaving the crowd breathless with his perfect sounding voice and his theatrical moves giving an atmosphere in the whole set. ‘Behind’ was the first song followed by “Advanced In Years” from ‘Behind’ album. The quality of the sound was unexpectedly good. They even played new songs ‘Tric Trac’ and ‘What Went Wrong’ from their upcoming album as Mario announced after thanking the crowd many times. They played songs mainly from ‘Behind’ and ‘Die Flucht’ leaving ‘Fastest Trip To Cyber-town’ outside. Jolly was smiling all the time not believing how the crowd responded, playing technical drum rhythms and showing us how an amazing musician he is. Rene was at the left side of the stage and seemed to be in another dimension when he was playing his parts, giving emotion to the songs. Mario had excellent contact with the crowd and maked a brief introduction in every song.

The crowd was other times watching the show stunned and others clapping their hands along with the rhythm, screaming and singing along the lyrics as in ‘One Night And A Dream’. Johannes Leierer also made an incredible job playing some great bass lines with a sound i still remember. At the encore they called to stage Vasilis, a guitar player from Velestino, Volos to play with them ‘Advanced In Years’ again. The band showed how professional and dedicated musicians they are playing over an hour and forty minutes.

It was past 1:00 when Mayfair thanked us once again and told us they want to return again to play some day soon. Unfortunately they didn’t play the last song of the setlist ‘Penny For A Poor Man’ a Warlord cover due to problems the club had with neighbours about the sound. After the show they talked, signed autographs, taken photos and spent time with the crowd closing the night with the best possible way. Until next time…