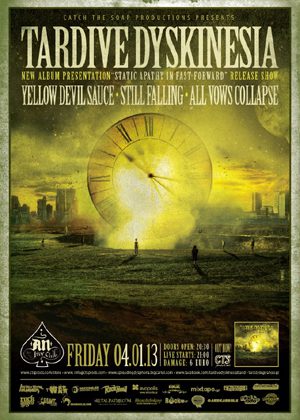 Three years after their album “The Sea Of See Through Skins” and 3 months after the release of their new album “Static Apathy In Fast Forward” progressive metal-ers Tardive Dyskenisia organized a release party having by their side three more bands Yellow Devil Sauce, Still Falling and All Vows Collapse each of them to fill the night with their own sound.

First in appearance All Vows Collapse, a hardcore/Punk band which made an… interesting funny entrance with a “member” of the band dressed like a giraffe dancing under the sounds of a Backstreet Boys tune. Soon enough the first notes hit the audience. Classic hardcore tunes, very pleasant to hear and with a strong attitude. Pretty good drum parts and in general the rhythm section was tight and strong.

Next in line were Still Falling whith a Progressive/Death metal sound. Amazing vocal parts, as the singer could easily manage to change from low growls to more high pitched screams. In each song they managed to interchange from death metal to melodic parts with great technique and especially the bass section seemed to control every note in the riffs. A little bonus from the band was a well-performed cover from Gojira.

Before passing the torch to Tardive Dyskenisia and a like a fish out of the water, Yellow Devil Sauce, which were the spicy ingredient of the night. With totally different sound from the whole show concept this trio managed to make a great show with a more Heavy/Grunge sound. Heavy rock sounds with a fresh touch and strong rhythms could describe the whole. The drummer was doing an amazing work in the back hitting like a devil, accentuated by the strong play of the bass. The only minus in my opinion were the vocals which sounded more like fading away from the whole sound given out. Still a great performance!

And now the for the highlighted name of the night Tardive Dyskenisia. Ok now I must admit that math/progressive metal is not really my cup of tea. But truly those guys know how to do it! Their complicated sound is played in a way that most fans from every genre can appreciate. Especially the tracks from their new album. Every piece of riff and rhythm was bounded together in a unique way, with complex technical passages but also managing to break them with more ambient and easily accessible parts. From what I heard, this album is for a larger range of audience which I find very promising for the band. The vocals where just perfect, tuned to every single note and heavy enough to make a difference. Really I won’t bother describe any technical detail as I’ll sound like a total idiot describing it but I will rather say that in general you could clearly distinct that every part was fitting perfectly to another. Of course they also played stuff from their previous releases which were more raw than the new ones but still heavy and powerful. Truly the best band of this genre in Greece.

For the end I like to make a remark about the sound cause I came to a conclusion from what I heard that night. I found that the general sound of all the bands was lower than the usual in that particular place. I know that it might sound like a minus but I personally found it a plus. Why? Because yes we hear heavy metal bands and it ought to be played loud etc etc but let’s get this straight. Playing LOUDER doesn’t make it BETTER! If the sound in a place is too loud your ear miss a lot of notes and melodies. Simple physics. To my ears, I enjoyed more than many other gigs for sure.