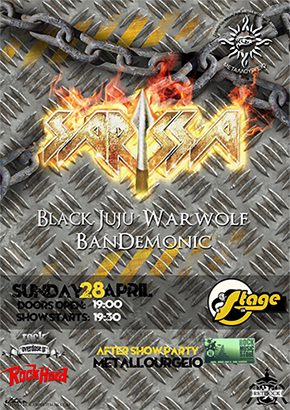 Sunday evening and is there a better way to close a great week than a heavy metal gig? Sarissa came for second time in my hometown Larissa and the show was held at Stage Club, with Black Juju, Warwolf and Bandemonic as support bands, so attending the gig was a one way road especially in a city like Larissa where we don’t get to see as many bands as in other bigger cities of Greece. Unfortunately, not many people have the same opinion so as expected the attendance was rather disappointing when I got to there. To be exact, I think that there were about 90 people at some point in the club.

The show began with Bandemonic, a band from Ioannina, Greece. These young guys play heavy metal and their latest release is an EP called “Chains”, so they arranged to play some shows in order to promote their music. They balanced between songs from their EP and some covers like “Iced Earth – Burning Times”, “Grave Digger – Rebellion” and “Judas Priest – Judas Rising” and their best moment was during their ballad called “Don’t Regret…Just Regret”. Their sound was good enough except the beginning where they had a few problems. The band felt welcome by the crowd’s response, which seemed to enjoy the songs during their show. After about 40 minutes they left the stage for “Warwolf” to come up on stage.

Warwolf is a band of teenagers from Larissa that have passion for music and a great future lies in front of them. They have recently released a self-financed demo with two songs that they played during their show, along with two new that have the same feel with the demo songs, old-school heavy metal at its finest. I liked their new songs called “Breaking Free” and “Marching Through The Dark” that show that the band is continuously getting better and better in the writing process. They also covered the classic “Angelwitch” of “Angelwitch”, “Black Sabbath’s” “N.I.B.”, “Dio’s” “Don’t Talk To Strangers” and “Ozzy Osbourne’s” “Mr.Crowley”. You should check their music and see them live to get a taste of what this band is all about.

Black Juju was next in line, a band with members from Larissa with years of experience in music and a big list of shows on their backs. So, they formed this band that is a mix of doom and stoner sounding very close to Black Sabbath” filtered with their own personal taste in music making it sound original. They released their debut full-length album called “Letters From My Brother Cain” in 2012 that got great reviews and have played with big bands like “Cathedral” and “Orange Goblin”. Their live performance is undeniable since the all have great experience. The band had a lot of fun while they were playing with “Panos Dimitriou” having this theatrical movement on stage and his characteristic voice giving the whole show another perspective. “Fontas Stragalinos” was digging his bass while “Dimitris Tsibonis” played his parts with ease and Kostas Mitin torn apart the drumkit. They played songs mainly from their album and closed with a “Black Sabbath cover”, “Fairies Wear Boots”.

It was time for Sarissa to come up on stage. The power metal band from Thessaloniki has a cult name in the Greek metal scene since they released their first demo in 1987 which had a huge impact in the Greek underground scene back then. The line up changed quite often through the years, with bassist Jim Selalmazidis being the only constant member. They released their first full-length album called “Sarissa” back in 1994 and split up in 1995. The band was formed again in 1999 and released a second album in 2004 called “Masters Of Sin”. They started their show with “War For Peace” and continued with “Never Say No” from their first demo. “Marathon” and “Survival” were next from the “Sarissa” album. They played the songs one after another while the hardcore fans created a welcoming atmosphere while they singed along with the band in the front rows. The band had great contact with the crowd and there was even interaction with jokes and teasing while George Chatzisimeonidis made a small intro before every song. They played “Masters Of Sin” and “Deathdance” and returned to their first demo and played “Electric Axes”.

The sound and the band’s playing were great with singer George Chatzisimeonidis making the difference with his high-pitch voice while Orestis Nalmpantis was on the guitars and Stelios Sioulas on the drums. The band introduced a new song called “Into The Night” which will be included in their new album and sounds pretty decent as the other two new songs. They played the ballad “I’m Coming Home” to calm down for a while and then another new song called “Fight the Devil” followed by “Thunder” and “Immortal Souls”. They played another new song called “Fallen” and “King Of All Kings” and thanked us while they were closing their set. They returned with “Turn the Power On” as encore and finished their show with “Macedonian Army”.