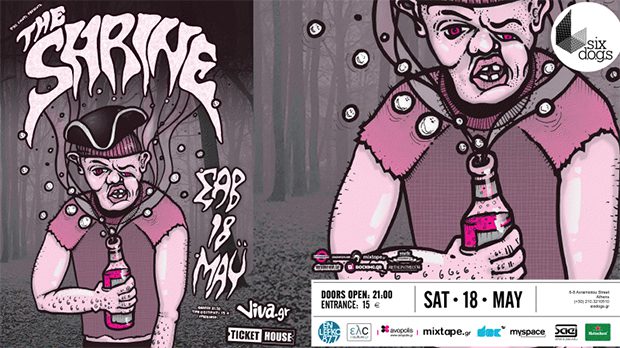 Ask anyone who attended this concert on Saturday night about their overall experience and I’m sure they will all sum it up in one single phrase: Money well spent. Contra Limit and Potergeist, two promising Greek bands were the opening acts for The Shrine, three crazy guys from Los Angeles who’ve probably sworn a secret oath about showing the world what it really means to rock on stage.

After half an hour since the doors have opened, the first band on stage was Contra Limit originating from Syros and the vast majority of the crowd had decided not to show up yet. I say too bad for them. Although they performed in front of a handful of people, Contra Limit managed to add some extra heat to the already warm spring night with their groovy Fu Manchu/Atomic Bitchwax – like riffs. I’ve seen this band 3 more times in the past (all of them outdoors) but they had failed to impress me. I guess indoor concerts suit them way better. Their sound was crystal clear, with the bass and the drums stealing the show and transmitting the rhythm to our bodies. After two or three songs I realized that their sound has changed in a way that is easy to recognize it as part of the traditional Greek stoner rock scene. Playing four songs from their upcoming EP they gave us a lovely opening act.

As more and more people kept coming to the venue, next up were Potergeist from Athens, five pumped up dudes that were decided to keep the flame lit up by Contra Limit alive. They played 8 songs, 4 of them unreleased, full of so many riffs that I lost the counting. What all the riffs had in common though was the power and the groove. Especially their third song, Love’s Martyr, was a straight up head bang command. Their sound was also as good as possible, with the lead guitarist proving he is a man who knows how to work his guitar pedal during the solos and the drummer giving the performance of his life. All of the members were full of passion and energy, with the singer being – apart from consistent with his singing duties – a constant joke machine, always teasing the crowd and his fellow band members. My only complaint is that both the singer’s voice and the band’s sound bear a striking resemblance to Pantera and Down. Being a band that consists of experienced musicians I’m sure they can work on their own sound and not waste their talent on things that have already been said and heard.

If the previous bands were energetic, The Shrine were just a time bomb waiting to explode. I can honestly say that I wasn’t ready at all for what was about to follow when they got up on stage. I had the chance to talk to them briefly (super cool guys by the way) between the first two bands and ask them what their main influences were. Their response was “You know, Budgie, early Metallica, Black Flag and mostly punk stuff”. All I have to say is that they paid an incredible tribute to their influences. Their performance was pure FUN, pure PUNK and a pure PRIMITIVE BLAST! It was nothing but a big party with people crowd surfing and moshing constantly, the bassist and the drummer playing unbelievably fast and the guitarist/singer delivering punk influenced riffs and solos better than their studio version and always communicating and making jokes with the fans whose minds The Shrine had blown.

The last song turned into a 15 minute jamming session during which a) all the members of the band crowd surfed b) the singer/guitarist exhibited his skate skills to the crowd when a skateboard came flying out of nowhere while the other two members where still jamming! They had a vintage aura, combined with an utterly fresh and unique sound, a massive ball of energy that rocked the venue and transformed it into an arena. There were one or two unfortunate incidents of fans crashing into the bands’ equipment but that wasn’t enough to spoil the night.

A thought that I felt must be shared is that if the ticket was a bit cheaper, I believe many more people would have come to enjoy this kick ass show. The fact that all the members from all the bands supported each band that was playing at the time is also important enough to be noted. At the end of the night everyone was absolutely content as all the bands gave their best performance.