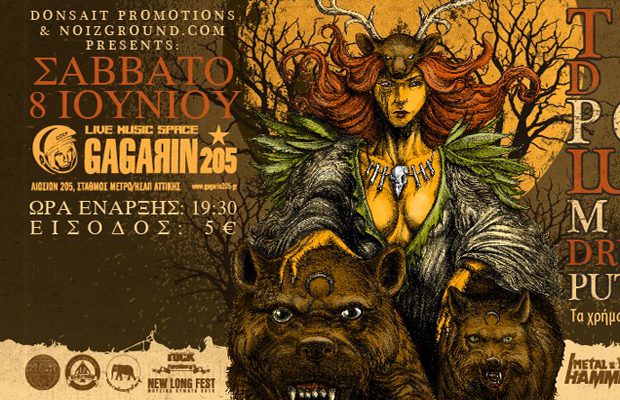 This Saturday (06/08), a mini music fest took place in Gagarin, a fest for charity reasons. Some of the best Greek groups joined forces to give an outstanding performance and support ‘Ανακούφιση’, a guesthouse for homeless children or homeless grown-ups. The money gathered by the arrangers of the event would be given for medicines and food for the homeless. These actions should take place even more often and the number of people who came by to support was satisfying. The bands arranged to perform were seven and two of them was Tardive Dyskinesia and Lucky Funeral, some of the biggest names in Greek music scene.

First band on stage was 2theBone! Those young rocknrollers has been giving support to many concerts for a while. Unfortunately, because of some problems with the transportation, I was forced to drop by late at the concert and only watched two songs by the specific band. The trio performed some good heavy rock songs, with wild mood and badass guitars. Last song was ‘Sister Demon’, a song that was uploaded as a rehearsal demo track recently at the band’s facebook page. I hope I will have the chance to hear more from them in the future. After 2theBone, Puta Volcano came on stage to warm up the audience with some desert rock music. The band rocked heartily, offering great, fuzzy guitar riffs along with strong vocals by the band’s female vocalist.

The third act for the night was Drunk Motherfuckers, who shook Gagarin with their stoner rock songs. The band played fast and aggressive heavy rock, but their sound wasn’t satisfying enough, at least from where I was standing. I could hear the band really loud and sometimes I couldn’t hear details like the bass lines or recognize the riffs. Beside the sound problems, which were mostly issues not controlled by the band, Drunk Motherfuckers performed rowdy (with a good meaning) and joyous! Afterwards, Maplerun started their live set, and the night went on fire. They were actually excellent, with heavy and fast guitars all over the place. Their drummer was exceptional; I could feel his tension by far away. The songs from ‘Restless’, the band’s latest record sounded really good on stage and when their set was over we all felt we needed more. Moreover, Maplerun had a large video wall behind them, creating a nice audio-visual show.

Later on, Lucky Funeral would start their show. I must say that, beside their experimentation of the latest album (who I personally did not fancy it; I preferred their first records), Lucky Funeral still are one of the most enjoyable bands on stage. With loads of energy, Mike, the vocalist, was walking up and down the stage, giving his best for the audience, while the others were performing loud. The more atmospheric songs weren’t flattering that much Lucky Funeral, but when it comes to heavy stoner moments the band was heady. Next act was Potergeist. The band performed songs from their latest work mostly, partying on stage with friends of the band who were moshing and headbanging all over the place.

Finally, after six bands, it was the time when Tardive Dyskinesia were warming up and making some changes to the stage. It was the first time I had a chance to attend a concert of them. I must say it was totally MINDBLOWING! Beside some problems with the sound (major disadvantage of their performance), the band was excellent and gave me shivers in every note. Energetic, immediate and experimental, the old hits and the new songs came together as an excellent music mix. The band is one of the greatest Greece has ever gave birth to and their jump out of border for a European tour proves it. I totally admire their passion over music.

The night ended with the best way. I must say that the fest could be better, but I wasn’t disappointed at all.  A lot of music fans came by to support and donate for the homeless and the bands gave their best to entertain and amuse. I hope more acts like that will continue to happen. We must not lose our humanitarianism, especially nowadays when a large number of people live on the street, losing their income and jobs due to the political system.