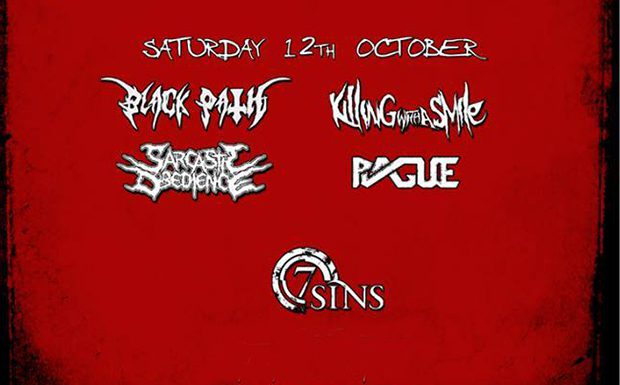 Saturday night at 7Sins club waiting for a clearly underground Greek live show (since the Brutal Deathsters Exhumer cancelled their show). Yet even the local acts were hit by bad luck: Death/Thrashers Sarcastic Obedience had to cancel due to the bass players throat surgery problem.

First band that took the stage was Plague with their old school Death metal sound reminiscent of Death and Obituary (on the song “Abyssdiver” though there was an obvious rip off of Death‘s “Without Judgement” the only con in their set), including two Death covers (“Pull The Plug” and “Spiritual Healing“) and one by Obituary (“Infernal Decay“) with Kostas from Sarcastic Obedience on the mic.

Coming up next, melodic Deathsters Killing With A Smile played with a different drummer only one song (a really good one that is reminiscent of Darkest Hour), due to a sickness of their original one. They were pretty energetic and were definitely a band I’d like to see playing again.

Then came the headlining act of the night: Black Path. With their groovy Death metal sound influenced by Sepultura, Cannibal Corpse, Bolt Thrower, Bloodbath etc. they took the stage with songs of their first EP “Dominion In Pain” (“Wounds“, “Ministry Of Sin“, “Born Underground” and “Fasten Your Guts“) including 2 covers on “Roots Bloody Roots” (Sepultura) and “Eaten” (Bloodbath) and ended with one of their more concert oriented songs of theirs and opening track of the EP “Bloodshed“. They took the stage by storm with great stage presence showing great intimacy and connection with their fans. Many people (including myself) proudly wore their T-shirts during and after their set. Support them in every way, they deserve it. The participation wasn’t that big (about 50 people if I’m not mistaken) yet, but that wasn’t a problem for the bands that played that gave all they had to please the crowd.