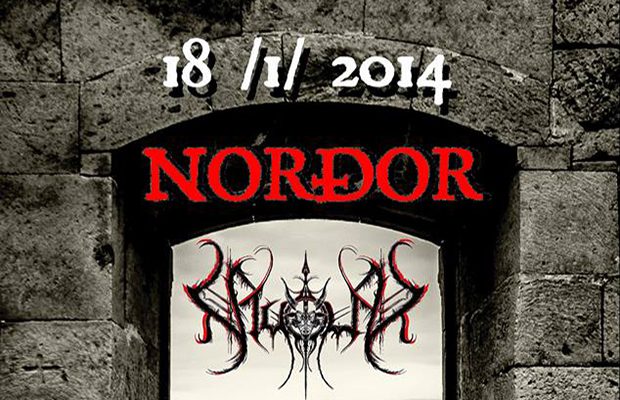 First of all, happy new year to all that read this, it was the first gig to attend for 2014 and let’s hope there’ll be plenty more to cover. Nordor were the band that organised this and we had the chance to see a package of Greek bands in 7 Sins Club, on a night that was ideal to go out, good weather, good mood, relaxation from the weekly jobs, what could be better? The gig started at about half past eight and was over after four hours approximately, so let’s get to the point.

Killing With A Smile was the band that opened the show, they played around 35 minutes and have a sound close to what we call deathcore, their logo also betrayed this, they have skills and abilities and they still need a lot of work before they can claim they play what they could call their own sound. The vocalist has a good voice for what they play and their drummer is of exceptional quality (he hits everything), but in some parts their compositions seem to get the listener confused and the band lost within its sound. They will surely do a lot better with more stage experience, so my first encounter with them is of mixed feelings, but I’d rather keep the good moments, which were more than the bad ones.

Congress Method came next, moving quite close to Killing With A Smile’s sound, with another great drummer giving a great performance, a decent cover of Slipknot’s ‘’(Sic)’’ and with the same duration as the first band in their set. I’m sorry to state this, but to say the least, I’d like them to take themselves a little more seriously, if they can’t take their music this way. The potential to be a good band exist, but they must talk less and play more. The guitarists play good riffs which need a little more focused direction. A note to the guys: You DON’T need a dancer while playing to attract attention, make your music more notable. A note to the singer: Take advantage of the skills of your voice and develop it inside the tracks, get this two connected and talk less between the songs. If the guys do these, then all will flow much better.

Vigour is a band that plays black metal the way the genre must sound. Aggressive, vast, fast, epic in parts and with a sound that was as clear as it should to make them sound like a good extreme band that plays music above all and not noise. A great throat by the singer and a great sound from the sound engineer helped them make a notable performance that stole a lot of impressions. They played a cover of Behemoth’s ‘’Ov Fire And The Void’’ (yeah!) in such a way they can claim they did a great job. The performance lasted about forty minutes and the guys will do miracles if they continue this way. They show very dedicated to what they do and they know exactly the sound they want to produce, so things will come to them the way they’ve planned them, one way or another. Hit it boys!

Nordor didn’t only organise the whole event, but also played around 70 minutes. Despite telling the fans they couldn’t play more because the drummer would spit his guts out, they didn’t show the singlest hint of tireness while playing. Greece needs bands like Nordor for sure and they need to play gigs more often, to show how powerful they are on stage, as well as they are on their albums. If I’m not wrong they’re counting 25 years of presence, so experience follows them in their playing and their mentality. Riffs that know what and when to play, two insane bassists (it was their first show with the second bassist) and a drummer that can play everything, though I liked his thrash metal style playing in many parts of the tracks, making the result sounding enough old school. A great performance, and a more enjoyable, as I had seen them with Deicide in Thessaloniki on May 2010 and they played much less tracks I couldn’t take a big taste of them, now I can say I’m full.

I’d like to end this report by saying something I’ve said again to the fans that are supposed to support such events. If you say you want to support stuff like that, it won’t be that bad to see the whole sets of every band. These bands play for you people, you won’t get hurt if you see the first band a little after eight o’clock and you won’t miss the night fun if you leave after midnight in order to see the headliner. This time you didn’t even have the excuse of missing the last means of transport, as it was Saturday and you had all the time in the world to go wherever you wanted after the show. The whole experience was notable and I’d like to wish the bands the best possible for the future. Let’s hope they’ll get more respect from the crowd next time and a big hail to those who stayed until the last track Nordor played.