After spending the day travelling, walking around and having fun with the bands around the island, it is finally time for Backyard Festival to start. Approaching the venue; which was actually the balcony of the University of Aegean in Syros, we began to worry as the first raindrops were making their appearance.

The amazing thing about some people is that, no matter what, they never give up. Not being afraid of the drizzle the first band came on stage to warm up the crowd with some interesting covers of popular songs like “Seven Nation Army” and “ Freed From Desire”. They have no name yet, they definitely need to practice more but one thing is for sure, these guys know how to party and spread the fun. 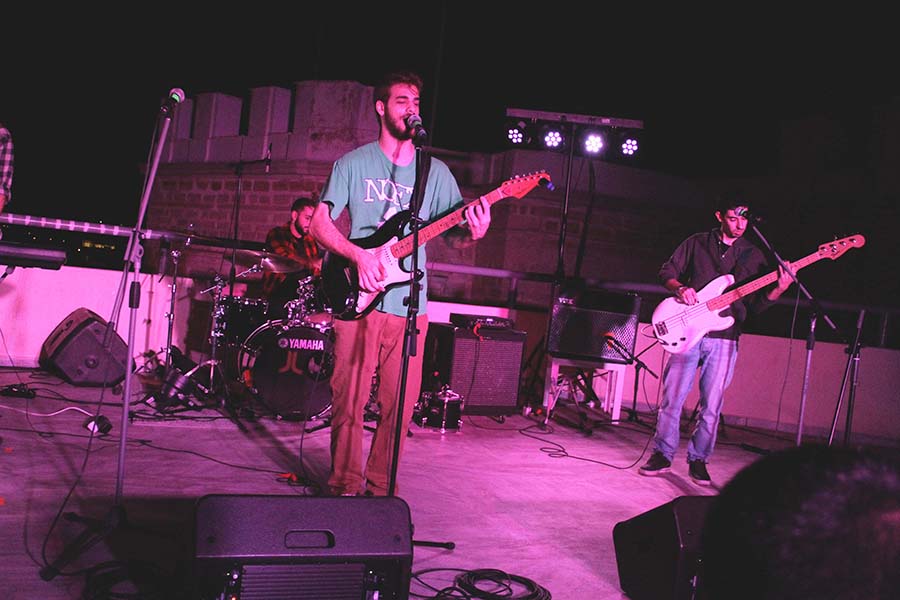 Seconds before the performance of TRIKAVALO the weather was definitely not helping as the pouring rain forced the stage crew to cancel the show –fortunately- for a while. Just like nothing had happened, the gig went on normally, the vibe was exactly the same and the crowd was cheering for TRIKAVALO who delivered some of their finest funky tunes in their own version of “Misirlou”,  “Jurassic Park” and a METALLICA cover which turned out to be a strong blend of heavy vocals and groovy bass lines. The trio left the stage with “Ska” and shortly after, THE BUZZDEALERS took control. 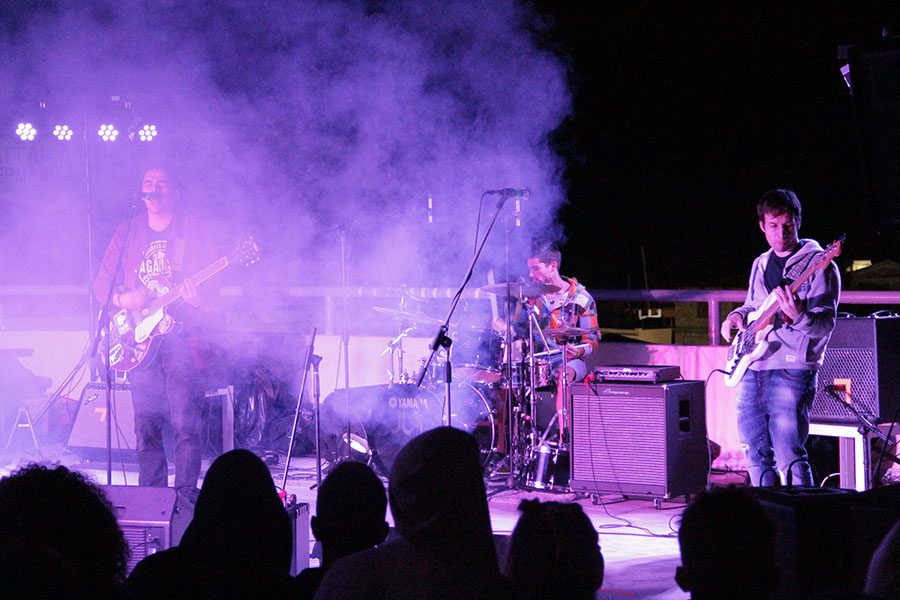 Can four musicians without a bass play some psychedelic blues rock? THE BUZZDEALERS proved that this is not only possible, but also amazing. Their one of a kind sound was completed with the insane vocal and stage performance of their singer who blew our minds with the cover of “Five to One” from THE DOORS but also with their own, sensual, “Sex Me Baby”, “Levitation”, “Midnight Doubts”. Their last song “From Mars to Venus” was a complete success and left us all fired up for the next band. 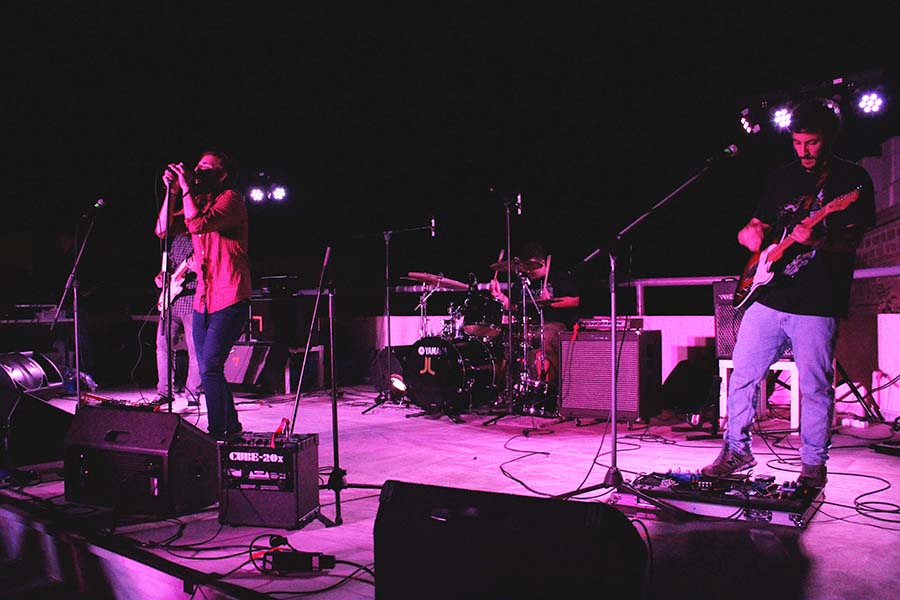 Next on the list were the well known 45RATS. The powerful rock n roll trio showed that it needs some real guts to play such music without any vocals. Doing what they know best, they kept the attention of the crowd throughout their performance with “529” and “Double Cut” but also with two new tracks. They were for sure worth the applause they received at the end right after their final track “Prediction: Pain”. 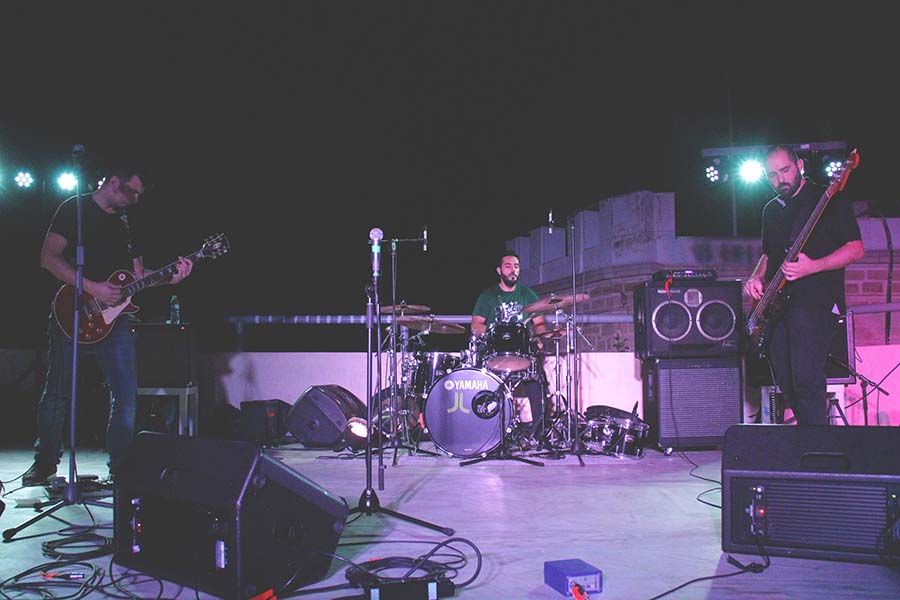 CYANNA MERCURY who followed is one of the most interesting groups of the fest. To be honest, their performance intrigued me with the variety of the musical influences and how successfully some real artists can combine them.  Unfortunately there was some damage to the PA, probably due to the rain but this did not defeat them at all. Some of their best tunes were heard in “Lunatic”, “Lilith” and “Dirty Things”. 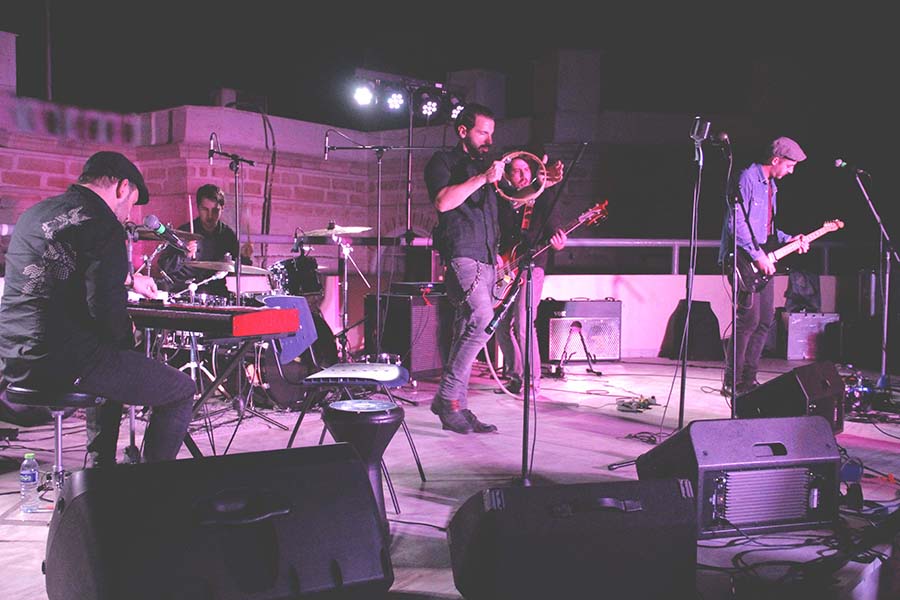 Having to deal with the issue of the time, as the fest was a bit off-schedule, the popular headliners YELLOW DEVIL SAUCE came on stage to give it all and initiate the frenzy that made the crowd jump around and dance as they were in a blender or something. “Let it fly” was one of the highlights and similarly were “Carnival” and “Loose Ends”. YELLOW DEVIL SAUCE served their purpose to the fullest and were the perfect conclusion for the first day of BACKYARD FEST. 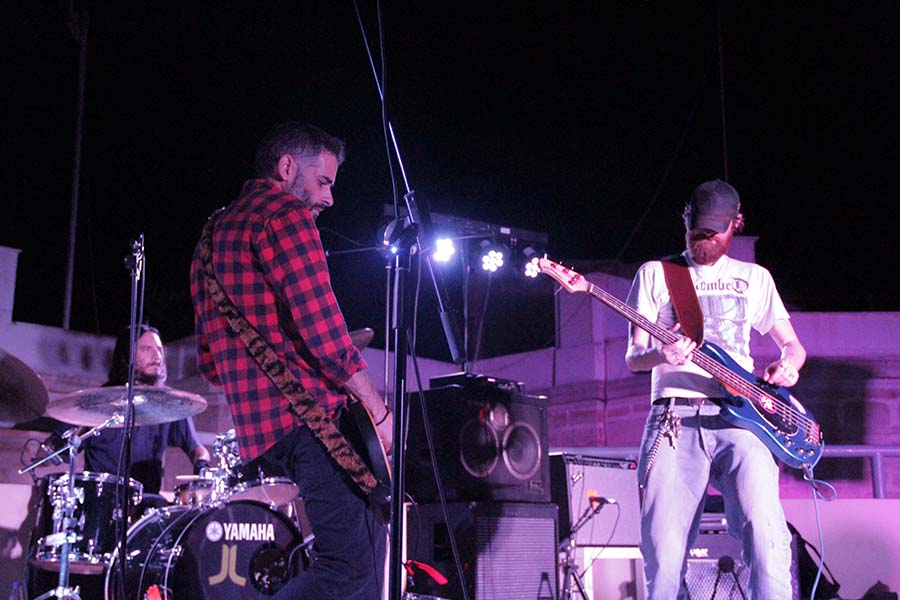 Tired but truly excited, it was time to call it a day and go get some rest to prepare ourselves for the second day of the fest. This was only the beginning!

After the great success of the first day of BACKYARD FEST, it was time to enjoy the second, “tougher” line up of the fest. As nothing always goes as planned, sadly a massive rain in the afternoon made it impossible to host the gigs outdoors. Small change of plans, the rain didn’t scare anyone and in no time everyone was present at the event!

KALONG were the first “victims” to try out the new stage and warm up the crowd. They were a punch in the ears as the dynamic trio was more appropriate for a hardcore show. Personally, I believe they nailed it –considering their genre- with their smart lyrics and their frontman who was something between Henry Rollins and Jello Biafra. Some of their songs were “Summer Outfit”, “Volume is not a white surface” and “Lawnmower man”. Besides their unexpectedly strong sound, KALONG certainly made some new friends in there. 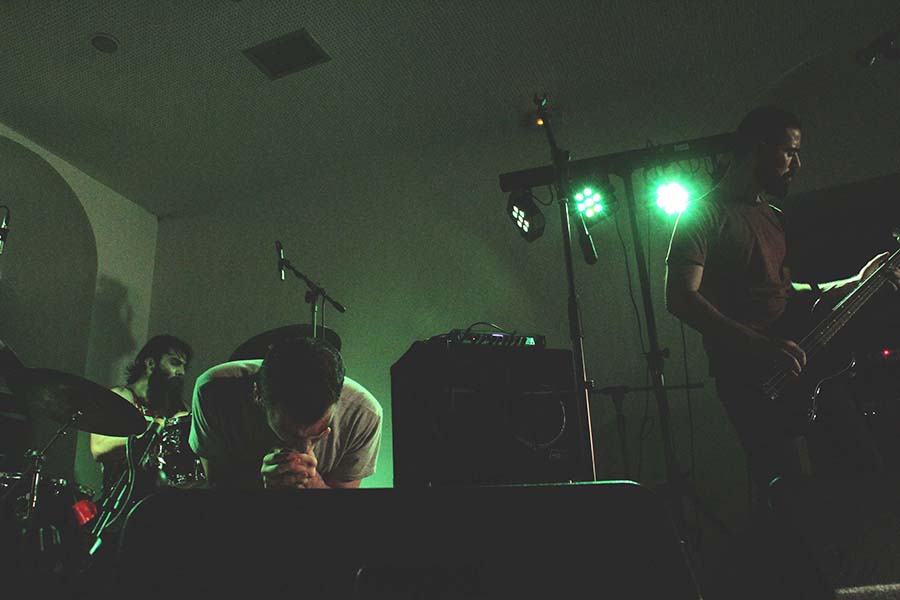 Soon after KALONG is the turn of the very positive and fun, THE OVERJOYED. By “Last Call” they made their statement that they do know how to play quality punk rock. Later on, the first mosh pits started out so the mood was set for “Abandon Ship”, “Sharp Teeth” and the really popular cover from the OFFSPRING, “Have you ever”. Despite a problem with a guitar string and the replacement of the instrument, their performance left everyone more than satisfied. You can never go wrong with some good punk rock, so the choice of THE OVERJOYED to perform before the CELLAR DOGS was perfect. 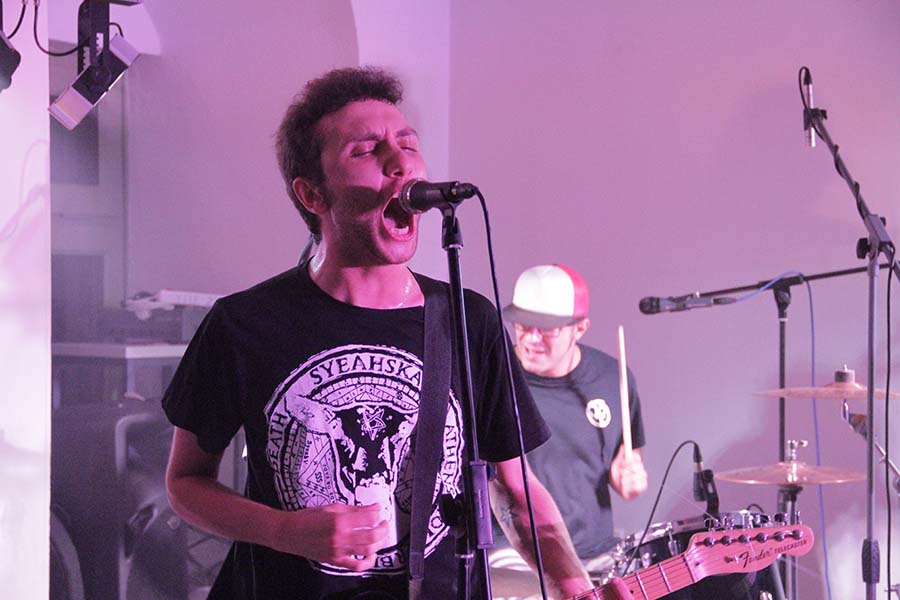 Most of the people there have already been to a CELLAR DOGS show beforehand, so it was certain that these dudes would make a mess with their tunes. Indeed, they started powerfully and the heat was rising. The audience was shaking their heads and jumping around along with “Jackhammer” and “Kalimotxo”. CELLAR DOGS played a new song which is interestingly influenced from METALLICA and finished with their inferno song “Confidential Game”. Everyone was fired up by this amazing performance but it was time for CONTRA LIMIT to join the stage. 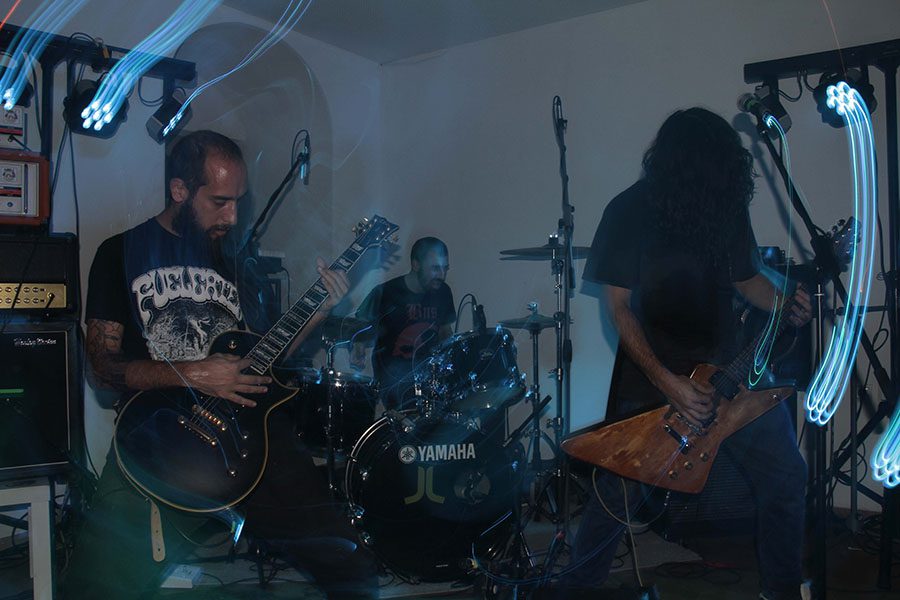 At that point, I took a break from my press agent duties and actually blended in the crowd to engage into this excellent performance of CONTRA LIMIT. As most of the members of the band are from Syros, the crowd supported them more than anyone by lighting up torches, cheering, singing along and shaking the place up. “The Orb” is always the mood setter, “DMT” and “Busted Game”-which was shared on stage with a member of 45RATS- are the peoples’ favorites and the two new songs seem to have fans already. The desert rockers have found the ultimate balance and keep progressing as we would all agree that could be seen in their last song, “Desert Lone”. 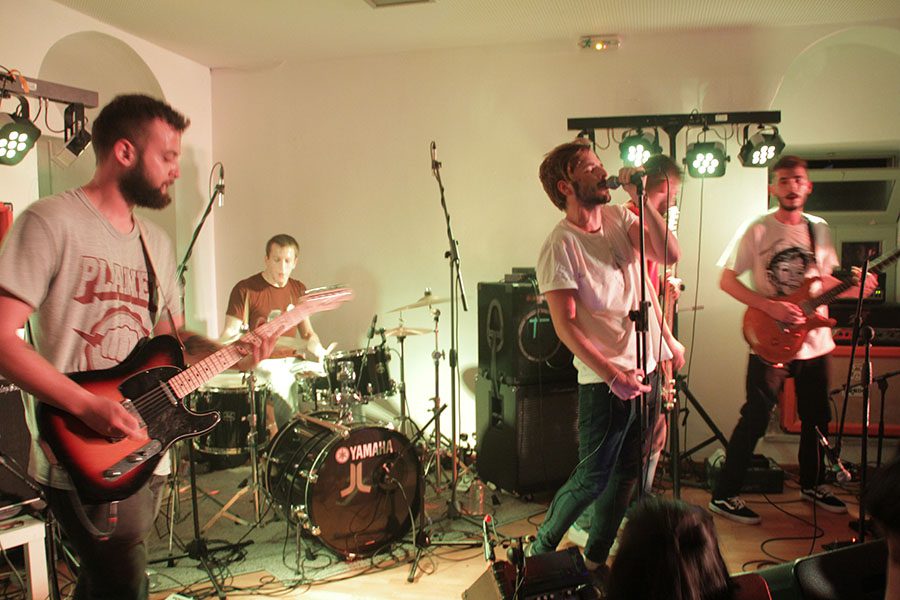 Last but not least the crew of heavy rock, BLACK HAT BONES jumped on stage to drain up the least bit of energy left in everyone there. Their massive sound was accompanied by a great stage performance of all the members who seemed to really enjoy their thing. Fewer people under the stage, but still active, made a lot of noise while listening to “Prophet King”, “El Camino” and “High Gain Devil Rockers”. New songs were also played by BLACK HAT BONES like “Back With A Black Heart” and “Cash”. As the show was ending, the vocalist took off his T-shirt to perform the last song of their set list, “Strip Club” which left the crowd cheering for more. 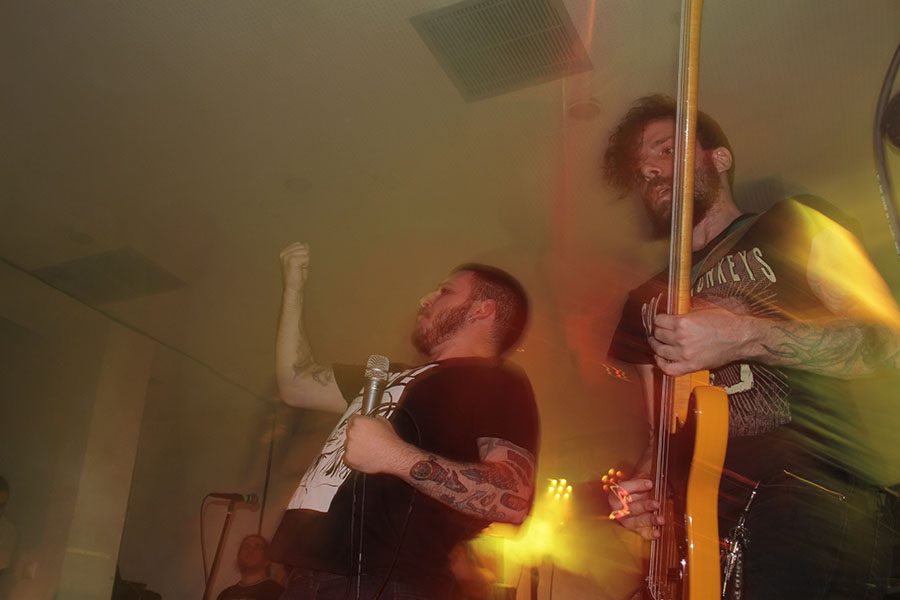 Sadly, the second day of BACKYARD FEST was over, but overall it was one of the nicest experiences one can have in an island. The crew as well as all the bands made it possible to bond and overcome quickly any obstacles, but also to have fun and leave every single person completely satisfied and full. I simply can’t wait for next year!