Canadian speed/thrash attack that Friday night, the legendary ANNIHILATOR were there to start the second leg of the “Europe In The Blood” tour in Athens and Thessaloniki. The venue was packed early on, seems a lot of people have been waiting for this one.

Opening act of the evening were FORAY BETWEEN OCEAN, an all-star band formed by Dionisis Christodoulatos (Sorrowful Angels, guitars), Elias Bouzeas (Sorrowful Angels, bass), Themis Ioannou (Trendy Hooliguns, guitars), Kostas Milonas (Outloud, Sunburst, Sorrowful Angels, drums) and Jon Toussas (Narcosis, vocals). If I were to describe what I heard that night, was a great mix of metalcore and modern brutal death vocals (perfectly melodic clean, not whiny), the rhythmic paranoia of Strapping Young Lad and Meshuggah, the melodies of modern melodic death metal riff/lead-wise and on top of that, some well-put orchestral parts bringing Septicflesh to mind. This has to be one of THE most unique-sounding bands I’ve heard in quite some time in the scene. Props to them for shaking some heads in the audience with their energetic presence, playing material off their debut “Depression Neverending”, and I’m sure many people were wondering where they could find the bands’ merch after the gig (myself included). Can’t wait to see them again! 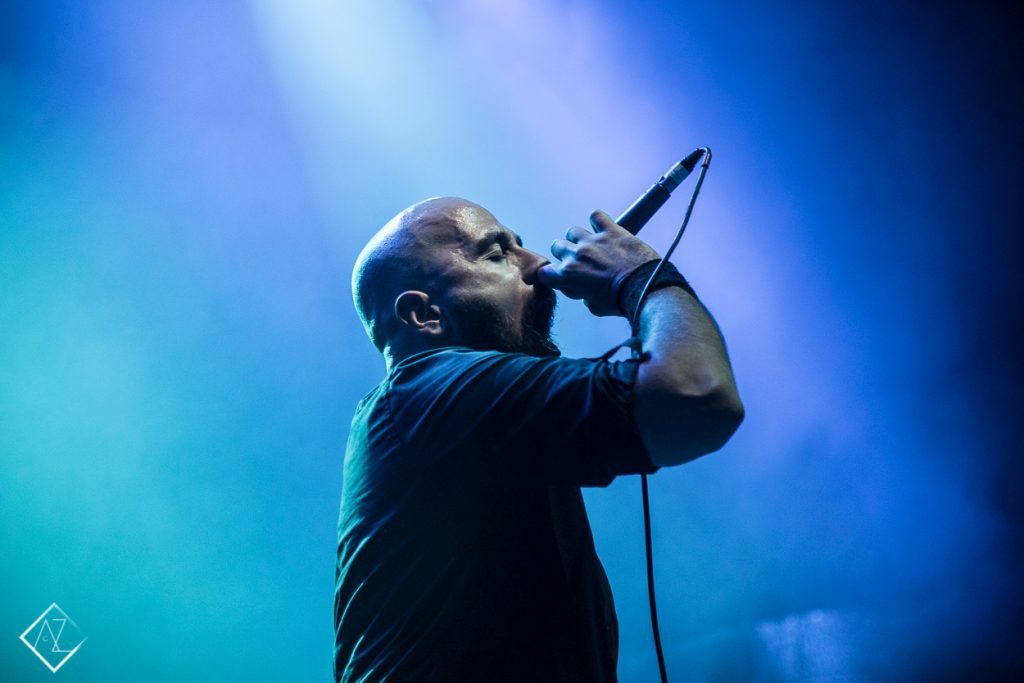 But it was time for the beloved thrashers from Ottawa, Canada: ANNIHILATOR. Coming in with the killer title track off their brand new album “Suicide Society” slowly shaking the headbangers in the audience. “King Of The Kill” off the same-titled record took over from there, turning on the mosh pits for the first time in the night. Even though the crowd wasn’t really energetic, it was really loud as it should be for a band like Annihilator. We heard songs from: “Alice In Hell” (“W.T.Y.D.”, “Alison Hell”, “Human Incesticide”), “Never, Neverland” (“Stonewall”, “Phantasmagoria” where they put Halloween masks on), “Set The World On Fire” (“Set The World On Fire”, “No Zone”, “Brain Dance”), “King Of The Kill” (“Second To None” written about the use of cocaine, “Annihilator”), “Refresh The Demon” (“Syn. Kill 1”), “Carnival Diablos” (“Chicken And Corn” which was played in the middle of “Brain Dance”), “Feast” (“No Way Out”) and “Suicide Society” (“Creepin’ Again”). For the next 90 minutes, the band simply killed it! 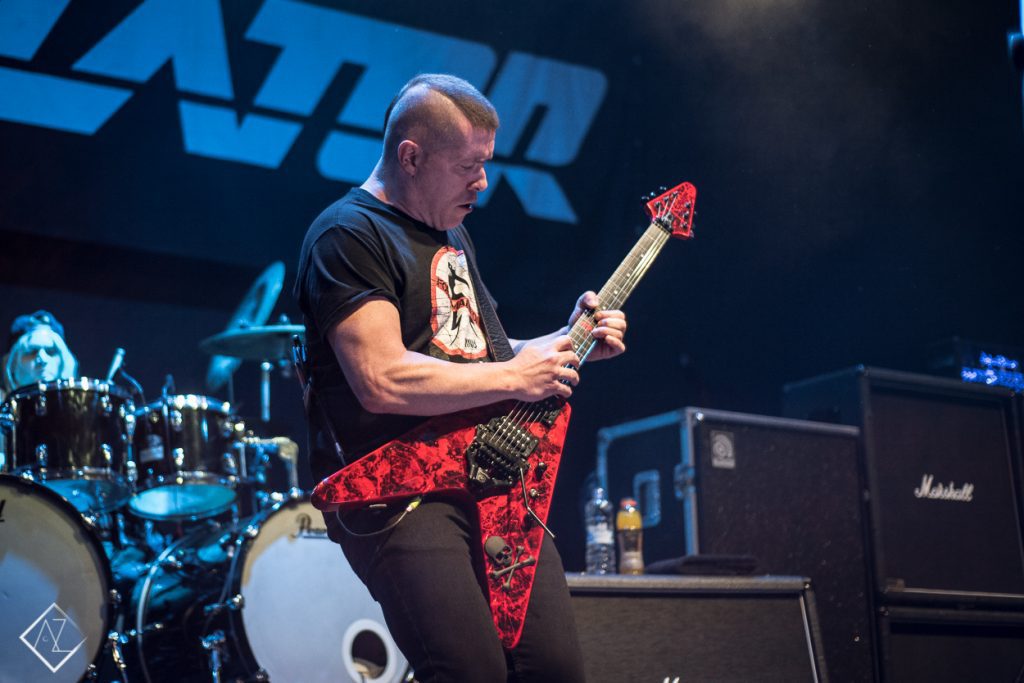 Jeff Waters was in an amazing mood, ready to joke about anything: the masks themselves (“Masks suck, you’re sweating your ass off, you fall and you can’t play”, right after “Phantasmagoria”), politics and military in Canada (“If the US army comes to us, we’ll throw ’em snowballs”), the “Chicken And Corn” song (“Our favorite food to eat when we don’t have any money”), Canadian behaviour and lots of things happening on stage and below the stage. That shows an incredible level of self-sarcasm that only a hard-working 50-year-old man can reach. Knowing who you are and where you’re going.The rest of the band followed the leader, smiling throughout the gig to everybody and showing how well-rehearsed and in the mood they were that night. Europe, don’t miss them, they are absolutely fired up! However, he recalled the Judas Priest/Annihilator/Pantera tour of 1991, citing Pantera, as one of the most influential metal bands ever. He also remembered the time when he was asked by Metal Blade to sell the rights to “Alison Hell” for 1000 $ (which was a lot of money back then), feeling thankful that he didn’t do it. 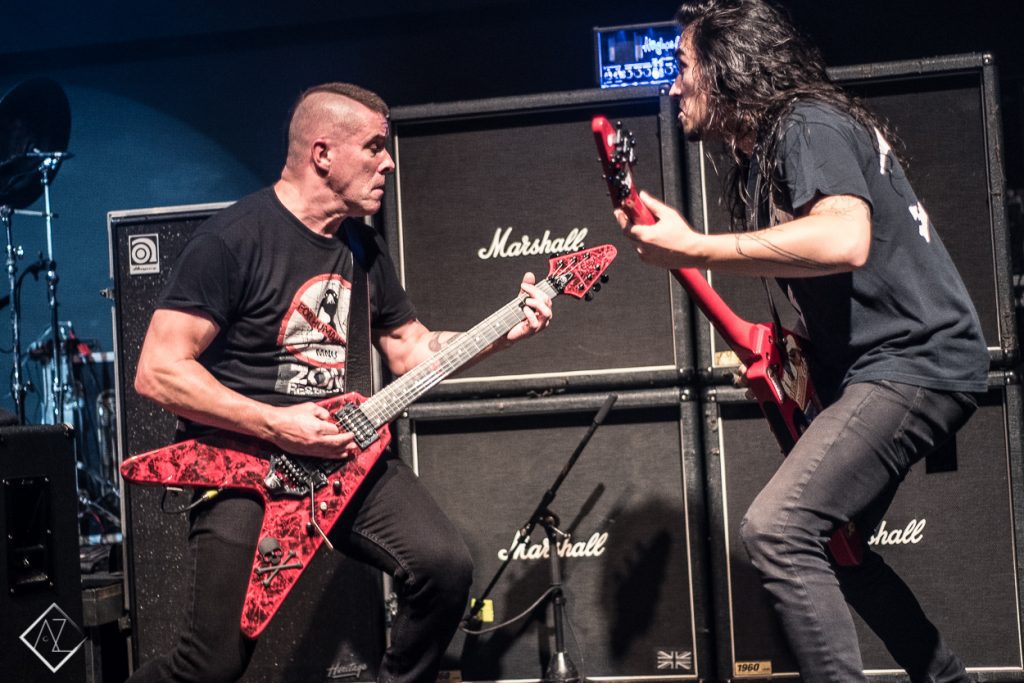 Also loved the fact that they didn’t play safe in terms of setlist choices, they left out “The Fun Palace” (which I’d love to hear) to play more obscure songs, and make a great set for the one who truly loves Annihilator, not just the one who’s stuck to “Never, Neverland” and “Alice In Hell”. Well done for that, and showing your trust towards your own material. When the lights went on after 90 minutes everyone was happy because they saw a band that truly enjoyed the show they played! One has to point out the EXCEPTIONAL organization (2/2 along with the Flotsam And Jetsam one) which helped everyone, since they had more than enough time to go back home safely. We need those kind of gigs more in the future! Cheers!