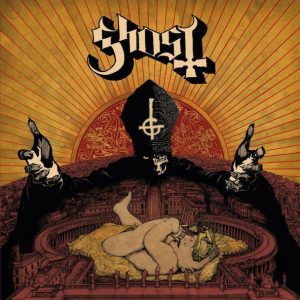 For those of you that don’t know them, Ghost is an occult rock/heavy metal band formed in 2008 in Sweden’s Linköping. It is definitely one of the top names in rock/ metal communion the last years and certainly one of the most discussed. Its members names and faces are unknown as they succeed in hiding their identity by using nicknames instead of their real names and can’t be recognized due to their eccentric look.

It is said that Papa Emeritous is Mary Goore (a.k.a. Tobias Forge (Repugnant, ex-Subvision)) due to the resemblance of their voices and has song and lyrical credits under the pseudonym “A Ghoul Writer“, according to www.stim.se (Swedish Performing Rights Society) but the band refuses to comment on these rumours. Their debut album “Opus Eponymous” gained high recognition and was nominated for the Swedish Grammis Awards.

Their new full-length album called “Infestissumam”, which means “most hostile” in Latin, debuted at number one in Sweden and one thing’s certain: It is far better than the fantastic “Opus Eponymous”. Ghost were in high spirits when they wrote this album and prove once again that all the buzz around the band’s name is not a coincidence.

First song is the title track “Infestissumam”, an intro to “Per Aspera Ad Inferi”, which starts with an amazing chorus and guitar melody and when “Per Aspera Ad Inferi” kicks in with furious rhythm and the band’s characteristic sound while Papa Emeritous II seducing voice fills the room you know that they did something right. The marching rhythm of the chorus in combination with Papa Emeritous voice gives me the chills. The band plays flawlessly all the parts reminding a lot of the first album but with far better production and if I may, even more melodic. Then we have “Secular Haze” the first video of the album which has a vibe like being in a demonic funfair along with the mesmerizing voice of Papa Emeritous.

As a fan of the band I absolutely adored the album but if I can name a song my favourite then “Jigolo Har Megiddo” is one for sure. The keyboards and give a majestic and kinda spooky feeling, as in the whole album, and guitars accompany with wonderful melodies and play one of the coolest guitar solos of the album. “Ghuleh / Zombie Queen” is definitely my favourite of the album and one of the best songs i heard for a long time. I could just talk for hours about it. The guitar and voice melody of the chorus is just haunting. Papa Emeritous is simply at his best, performing almost theatrically while the guitar melodies and the piano/ keyboard parts are just out of this world.

Same goes for the next song, “Year Zero”, which was the second video that the band released. This album is full of melodies and leaves you with a sense of euphoria continuously and the songs are easy to listen. “Body And Blood” and “Idolatrine” with the beautiful choruses or “Depth Of Satan’s Eyes” and “Monstrance Clock” tremendous melodies, from the first to the last song there in no way you find yourselves bored with this album. The Deluxe edition contains two bonus tracks, “La Mantra Mori” and “I’m a Marionette”, an Abba cover and Japanese edition has one more additional bonus track, “Waiting For the Night” of Depeche Mode.

I know it’s a bit early to make such a statement but “Infestissumam” is currently at least in the top three of best albums for 2013. If you like them and haven’t listened to the album yet, do it now. If you don’t know them, then this is the time. Don’t waste another minute. Allow yourselves to drift off into the world of Ghost.