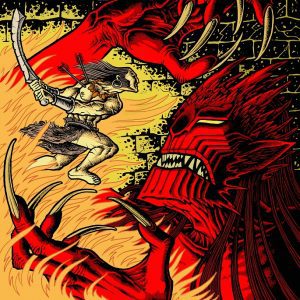 US stoner rock band Black Pyramid had a difficult question to answer back in 2012. This question was about how successful they can be without Andy Beresky, their guitarist and vocalist for about four years. After two full-length records and some other releases, Andy decided to quit, leaving the two other members alone. Gein (bass) and Clay Neely (drums) continued with the band, hiring Darryl Shepard to sing and play the group’s heavy riffs on the guitar.

As a result, we have “Adversarial“, their third album so far. Black Pyramid’s aesthetic is recognizable to the record’s cover and it counts just five songs, and about 38 minutes of stoner and doom music. First things first, the music is a little short in duration, catching me thinking that I needed more and that something was missing. I’ve been curious about the guitars and the vocals too. However, I think that Darryl Shepard did a wonderful work. His voice is harsh and deep, fitting exactly with the heavy stoner riffs Black Pyramid usually rock out.

The record starts with “Swing The Scimitar“, a long duration song (about twelve minutes long), and Black Pyramid greets us with some of their stickiest riffs. Explosive and trippy are some of the adjectives that could describe the sounds of “Adversarial“. Now, some shortcomings of the album; more vocals seem to fit in songs like “Aphelion” so as in the instrumental song ‘Issus’. The second of the above-named, breaks the flow of the songs and could be a different one, a better one. However, the record closes with “Onyx and Obsidian“, a song which causes strong headaches because of the headbanging following it! There are some of the best vocals Darryl Shepard has sang in his short shift as a member of Black Pyramid.

The production leaded to the right result, an underground-like record. Nothing special but a satisfactory one. By the end of the “Adversarial”, the fact that the band could slow-down the recordings and takes their time is clear enough to be comprehended. They could have a pippin album, but specific particulars reduced the awesomeness and quality of the record. But, I’m not disappointed, the melodies and riffs of “Swing The Scimitar”, “Bleed Out” and “Onyx and Obsidian” are striking! I’m pretty sure their next release will be much better, as the band will progress and improve, leaving in the past the recent line-up change.

Overall, a fine record and a great chance for the band to hit the road and perform new and old hits.