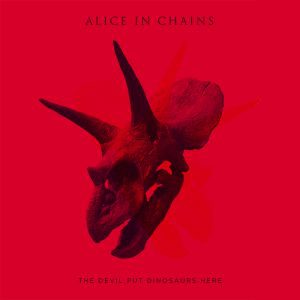 Nearly four years after the amazing previous album ”Black Gives Way To Blue”, I catch myself feeling remorse for giving it only 8.5/10 in a pathetic effort to look objective and prevent me from praising the album the way it deserved. I thought back then that with the bands we love and have grown up with we must be a little harsh, but BGWTB proved me wrong quickly enough, as it wouldn’t be a lie if somebody told that it was the best album of 2009 in general. As you understand, I was expecting their fifth album eagerly with a lot of high expectations.

The minimalistic cover and the strange title ”The Devil Put Dinosaurs Here”, plus the fact that the first two tracks leaking (the haunting ”Hollow’‘ which opens the album and reminds a little of ”A Looking In View” and the fantastic ”Stone” with an enormous riff and one of the best middle riffs in rock history ever) were leading me to the fact that “TDPDH” would again be the album of the year. If we count as a bonus that the tracks between these two are great ones (”Pretty Done” with its ”Dirt” feeling and ”Voices” which could be the next single) then the album was promising from the very beginning.

Then comes the time where the album makes me divide it into three parts: The first four songs, the next four songs and the last four songs. Twelve songs with 67 minutes of duration make it the longest playing Alice In Chains album to date. A high risk especially after four years and with BGWTB being a solid and consistent album, “TDPTH” proves to be an honest album successing decently the colossus the band released fourteen years since their self titled album. On the other hand, you can’t help but catching yourself thinking that the new album follows a somehow safe sounding and composing recipe which would be cool for other bands but not for the once innovative Alice In Chains.

Yes, it is even heavier than the previous album, yes, the vocals dominate the compositions and William DuVall sounds even better, accompanied by a very mature -and short haired this time- Jerry Cantrell, yes, the production is ideal….BUT! There seem to be tracks that we have heard again better in past albums like ”Lab Monkey”, ‘‘Low Ceiling’‘. Without being awful, they sound repetitive and a little indifferent, surely not reminding of the band’s glorious past moments, and seems as if they were written in the blink of an eye. ”Breath On A Window” is slightly better because of its more positive feeling.

The album closes a little better, with ”Scalpel” bringing back the acoustic AIC of the past we all love, ”Phantom Limb” being the monotone metal track of the album with the repeated heavy riffing across its seven minutes, ”Hung On A Hook” continuing the good final flow of the album and ”Choke” which could be nothing less but the closing card with its slow rhythm and atmosphere. Listening to the album again and again you may find new elements here and there that will get you connected to it. The only problem is that all their other albums did that from the first time you listened to them. A very good album but not the album of the year I’ve been expecting from a large band like AIC.