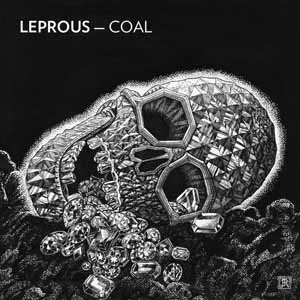 From a fresh start a few years ago LEPROUS from Norway have proven themselves as a hard working progressive metal band. First it was “Tall Poppy Syndrome” that showed really great potential for some high class music. Next came the colossal progressive metal record called “Bilateral” with the help from Ihsahn as a producer and behind the scenes mastermind. Giving them the push they needed to proceed onto the next record with the simple name “Coal”. Let see where they can take us with this one!

The first listen I had made for this record simply was breathtaking because this sound of Leprous has so many influences filtered specially and uniquely that the compositions really give me the goosebumbs of pleasure. As the record moves forward, song by song, I can say that only a big influence surfaces instandly..Queen ‘s phantom of choirs and melodies has its toll on them…And it’s increadible!!!

Leprous have completely drained every sound and music that their minds could make up for this record and boiled it in a pot with Queen’s filters so that could convience anyone that could imagine this band -Queen- starting now they would as Leprous…Sorry everyone!!!Leprous do it better in any term and thankfully enough Queen is Queen and Leprous are themselves as well!!!

Nice mid tempo songs throughout the record, vast moments with a breath of freshness and the 8 strings used completely different than the usual. Einar on vocals has almost completely abandoned the brutal aspect of his voice but this does not mean that the rest of their music has softened in a any way.

Progressive metal with simple elements and really interesting ups and downs mixed by maestro and producer Ihsahn once again whose influence and presence has its great role in the upbringing of these interesting musicians that is Leprous reflecting on their personal development as music individuals.

It seems that LEPROUS has established themselves and now there’s nothing but great music to expect from these gentlement. This is Coal’scontent. Great music from a great band!!!Do yourselves the favour and have a listen!!!