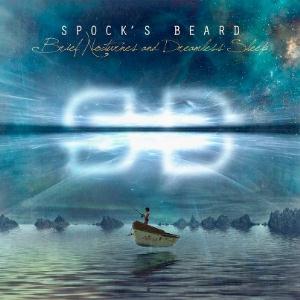 So it’s time again for a new Spock’s Beard album! After three years of waiting and their last record “X” in 2010, the prog masters return with some lineup changes to their previous label Inside Out. Although Neal Morse left the band in 2003, the band had a difficult job but managed with the great Alan Morse on guitars and Nick D’Virgillo on drums and vocals to get along and releasing great albums like their previous “X“.

The man behind the drum kit on this album is Jimmy Keegan which was a foreseen move because he is a touring band member many years now. Their new singer is Ted Leonard (Ex-Enchant, Affector) which is for me such a great move because he is one of my favourite prog metal singers and also gives an impression of refreshment to the band and also fits like a glove to the music of Spock’s Beard, such a great choice!

“Brief Nocturnes And Dreamless Sleep” is once again an album with long songs and with ’70’s progressive rock aproach. The first three songs “Hiding Out”, “I Know Your Secret”, and “A Treasure Abandoned” are in the classical Spock’s Beard mood. But while the 56 minutes of the album are passing, we are listening some more interesting songs. The highlights would be for me “Something Very Strange” and “Afterthoughts” because of the great harmonies and polyphonies.

Also we should mention Neal Morse‘s guest appeareance in “Afterthoughts” and “Waiting For Me” (also co-writer in these songs). It is no coincidence that on two of the greatest songs of the album, Neal Morse was co-writer. The man is a genius! What I find also cool is that the song “Submerged” is Leonard’s composition which shows us that the band is giving from the beginning freedom to the new members. About the musicianship I can’t say much, we all know how good these guys are on their instruments and what I love is that this is a band where everybody can sing and the result is amazing harmonies and polyphonies. Whoever likes progressive music in any form should check this album out!