Children of Bodom
Halo of Blood 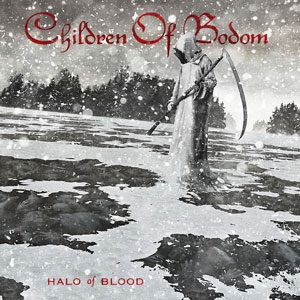 I was really surprised when I was assigned with the review of “Halo of Blood”. You want to know the reason why? I had forgotten Children of Bodom existed. It is a sad fact, but I honestly believe that after “Are you dead yet” the vast majority of their fans had lost interest in their work. During the first half of the 00’s, Children of Bodom really caught on amongst the population of melancholic teenagers who needed to listen to something dark but not too sinister, because, let’s face it, if they wanted something like that they would listen to Mayhem. After that trend passed, so did this band started to fade away, getting less and less publicity everyday that passed. With all the above being said, let’s examine if “Halo of Blood” is the comeback this band needs in order to get back in the game.

To be fair, there are some collectively good songs in this album! The opening song “Waste of skin” had me on my toes from the beginning with that great opening melodic riff, its fast pace and the interesting changes in the middle part, plus it has a killer solo (should be longer though). Also, many were the times I caught myself humming “heeeey, what happens if you’re still alive?” the outrageously catchy chorus of “Scream for silence”, a song that also has correct guitar work and is quite pleasing for the listener during the 4 minutes it lasts. And then there is “Bodom Blue Moon” which is a song that they should have named “Dream Theater”, but we will turn a blind eye due to the positive result.

But beyond these three fine pieces of work the outcome is borderline pathetic. It is as if they members of the group got bored during the recordings and just hurried on to record another 8 songs to fulfill an obligation towards the record company. The verses are some of the most tasteless pieces of metal music I have ever heard in my life. There is no thinking out of the box, no innovative structure of songs, to the point that sometimes you’ll find yourself forgetting you were even listening to a song. “Oh, it ended?” was my catchphrase during the hearings of many tracks from this album. A perfect example of that situation is the song “Dead man’s hand on you” which also could be named “Type O Negative”. Let’s not fool ourselves, it is a total tribute. The song kicks off with a great acoustic guitar and piano, in the same spirit as many Type O songs and I thought it could be a hidden melancholic gem. And then the voice came and I started laughing so hard because it was one of the worst things I ever heard in my life. It wasn’t deep, it was not sensual, and it seemed like the voice of a 50 year old guy waking up in the morning. And the rest of the song was two or three boring guitar melodies.

To a great degree I attribute this failure to the sound Children of Bodom have decided to work on. I’ve stated in the past that I love it when a band can incorporate multiple and/or dissimilar elements to their sound. But in “Halo of blood” it’s as if a cheesy power metal band have merged with a crappy 80’s AOR band that uses the same song structures (verse- bridge- chorus- repeat) hoping they will write some hit song and this sound is being channeled via a death metal background from a Schuldiner wannabe. There are so man things that just don’t match! Like the needless cover of Loudness’s “Party nights”! The only time when they succeed in the “let’s create a catchy part” attitude is when they let the keyboard guy take over. I want to stress this out, this guy is phenomenal! I can think of at least four songs where the only interesting thing was a change of rhythm where a magnificent melodic keyboard played the leading role and the guitar followed.

Bottom line though, you can’t wait for the keyboards on each and every song in a melodic death album. The keyboards should be the icing in the cake. Certainly, each member of Children of Bodom has great talent and technique, but if it’s not invested in groundbreaking musical ideas then we will have results like Halo of Blood, mostly odorless, tasteless and meaningless. Maybe some bands have an expiration date concerning their wide public success. All in all, “Halo of Blood” is an album that die hard Children of Bodom fans may find pleasing, but I wouldn’t recommend it as a whole to anybody else.