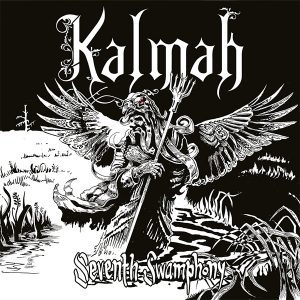 If you enjoy Blind Guardian and Amorphis during their “Tales from a thousand lakes” period you’ll definitely find something interesting here. If you enjoy melodic death in general then you are going to love “The Seventh Swamphony”. I am not a person that appreciates melodic death but I was taken aback from the power of this album! The argument that most of us “pure death metallers” use against melodic death bands is that they use a more power metal orientated sound, cleaner, and more joyous, thus desecrating the word “death” in the band’s description. That is not something you’ll find here. Kalmah’s sound is colossal and the voice is as hardcore as it should be.

Although it is obvious that the power metal element overpowers the death metal element the sound is not deprived of brutality, it is just that this brutality is punctuated by multiple power metal chords and melodies, melodies that are beautiful and sometimes epic. I’ve already stated that in this album Kalmah sound like a fiercer version of Blind Guardian (and perhaps Angra). The fact that they sound mostly melodic though doesn’t stop them from having moments of dark and sinister music, really ambient and otherworldly due to the aptly use of choirs and the magnificent work of the keyboard player. The keyboards are just addicting. And at some points their music was a strong reminder of the themes of the videogame Castlevania, check it out if you don’t know it!

The sense of rhythm is present in almost every song. “Deadfall” for example is hands down one of the best songs of 2013. There are songs that will make you move, tap your feet, headbang, sing out loud, you name it! But the really impressive fact is that all this feeling is being channeled through many layers of technique! There are hundreds of difficult changes in the tempo or the vocals and they manage to hit most of them perfectly, with professionalism and yet make them sound like an important part of the song, a part with a true meaning and place that without it the song would be less interesting and not just a meaningless show off of skills. As expected, sometimes that recipe doesn’t work out and the whole lyrical style or some of the fastest parts combined with the more guttural backing vocals tend to be tiresome for the listener. Plus, I believe two or three more songs could be added in the album since the band seemed having great inspiration.

The exceptional drumming is also something that should be noted. That guy is giving his 110% of effort. In general, not so close to the forefathers of this genre (Dark Tranquility, At the gates etc) but without failing in representing melodic death proudly, Kalmah manage to create a sound of their own, filtering their influences and using their own unique and innovative ideas into creating a really interesting album that is bound to entertain anyone that has ever been interested in the European power/ symphonic metal scene or the melodic death scene in general. Great work and we are looking forward to their next accomplishments.