Armed For Apocalypse
The Road Will End 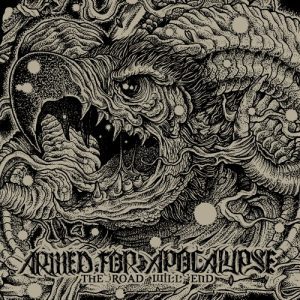 Once again I’m given the task to cover a review about a new-coming sludge metal band from the US. This time, the band I’m about to review is Armed For Apocalypse, from Chico, California. The band began their official journey back in 2009, when they released their first music record, ‘Defeat’. After hitting the stage in Europe and the US, the band came back this year, with their latest music record; ‘The Road Will End’. With a great artwork in the front cover of the record (I really like that Baroness-like style of covers, with colors and good drawings, which popped out the recent years), I’m ready to find out what the band has achieved this time.

Armed for Apocalypse is labeled as a sludge-metal band, although for their first record they played something heavier and more extreme than slow riffs and hardcore vocals. There are some sludge metal parts but the band sounds closer to Mastodon’s ‘Remission’, with aggressive attitude which is interrupted by slow guitar riffs and break-downs. All these are hearable in ‘Shadows’, as well as in ‘The Road Will End’ (which is in my opinion better than their debut). As a result, the record is multidimensional and combines loads of music styles such as sludge metal, post-metal and hardcore. I’m going to analyze all those in details right below.

With ten tracks on the record, ‘The Starting Line is a Trip Wire’ is the opener track of ‘The Road Will End’ and from the very beginning we can hear the hardcore elements the band uses. The song strongly reminds of crust in some parts with aggressive hardcore vocals. However it leads to a great break-down and the song turns out with a sludge closing part. On the other hand, songs like ‘The Well’ are closer to sludge metal and drone music, than the aggressive ones. The recipe of mixing crust songs with sludge ones in one disc is actually really innovating and interesting. ‘Open Wound’ also combines the extremeness with sludgy break-downs as well as ‘Worth the Weight’ and ‘Drawing a Line’. There are loads of post-metal elements as well; melodies for example, through the guitars. The record closes with ‘Ends Meet’, which is an acoustic song, about one minute long. The song calms down the listener, after all that energy blasting in the previous tracks.