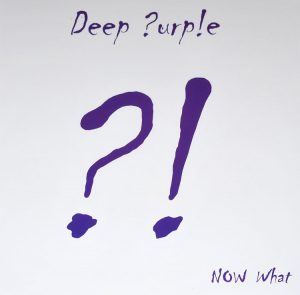 So, I’m trying to find the right words to start up this review. Who am I to judge the new album of one of the greatest rock/metal (and music in general) bands of all time? These legends were playing music and filling stages with thousands of people when I wasn’t even born!! And what can you say about their carreer or music? Who doesn’t know a single Deep Purple song? This is a big deal for me as I’m writing one of my most important reviews when it comes to the band’s name size and reputation.

Almost eight years have past since their last efforts left a lot of fans of their music bitter. And you know what? The new record sounds fresh and in my opinion it’s their best album in many years. No I’m not trying to be nice. It may not be their best album but it surely is better than Black Sabbath’s “13”. No disrespect for Black Sabbath here, I’m one of their biggest fans too but this one is more honest and has more emotion and balls than the almost original Black Sabbath line-up release.

And the true reason for that amazing result is that Deep Purple has finally left the ghost of Ritchie Blackmore behind. Sure they always claimed that their sound changed since he left the band but this is the first time you can really feel it. Once again I’m not disrespectful against Mr. Blackmore but I always admired Steve Morse more and thought that he never had enough space to do what he knows best. Well, times have changed and he was set free to express himself and in my humble opinion he did it like no one else could.

“Now What?” was released almost one year after keyboard master Jon Lord passed away and as expected the album is dedicated to him. You can feel the Lord vibe in the record’s entirety and especially in songs like “Above And Beyond”. Don Airey plays some incredible stuff and retains his Hammond sound during the whole album, which creates a back to the basics kind of sound blended with a modern approach on today’s rock music.

Roger Glover plays some magnificent bass lines and doing some backing vocals while Ian Paice plays once again some of the best rhythms on his drumset. He has been a fantastic drummer since day one of his career and needs no further recognition. Check his fantastic grooving especially in song “Body Line”. Even though Ian Gillan’s voice isn’t as good as it was in the past, he seems to be doing well even now after all these years. I also have to mention producer Bob Erzin (Pink Floyd, KISS) that has managed to maintain the old sound of Deep Purple while at the same time sounding modern.

“Now What?”, the nineteenth studio album of Deep Purple has all the elements that fans of music are looking for. It’s solid rock, groovy, sometimes blues, progressive, and other times emotional. It has great consistency as an album and the overall quality is beyond everything someone would expect from these rock giants if compared to previous releases.