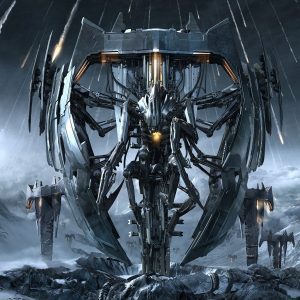 I was always in the position to take Trivium’s side in all possible conversations about them. There were many crappy groups out there, but people would focus on throwing their arrows on the Americans, maybe because it was Roadrunner Records’ primary band at the moment and they would support them so strongly, stating they would become the next Metallica or Iron Maiden. And as we know, as much as they want to call themselves united, the metalheads always need a reason to start arguing about everything and everyone to show who’s right, who’s smarter, who’s got the biggest dick and crap like that. While all these shit have been taking place for years, Trivium continued getting bigger and more interesting as a band that people forgot about them (or so I hope) and focused their argues on other bands. Sixth album for the band and a really critical moment for their career and future for sure.

I state this opinion, as ‘’In Waves’’ was a great album, showing the power of Trivium, with a great variation of tracks that made it a very important album, despite its long duration. ‘’Vengeance Falls’’ starts with the difficult task to compete its predecessor and as a first taste, it sounds a little more mellow and mature, without this meaning it’s cheesy or they became more commercial. ‘’Brave This Storm’’ and the title track are great openers for this album, which is likely to bring more fans for the band. Matthew Heafy proves to be a flexible songwriter, except from being a skilled one in general, as he’s put all Trivium’s essence in this album. Fast ones, mid tempo ones, more melodic ones, everything’s here to make another interesting release for the young Americans (don’t forget they started at a very early age and that’s why they became so special).

The first eight songs are very close to their durations, clocking from 4:06 to 4:55 and that shows the consistency of the album and how easy it is to flow. I bet that even fans listening to them for the very first time will understand how much important they are as a band and that they really have a lot more to offer to the whole metal scene. Heafy’s vocals not only improve much more each time, but he’s definitely the best in changing from harsh to mellow and vice versa from all his colleagues concerning the American scene. In a year that DevilDriver, Chimaira, Killswitch Engage and As I Lay Dying released their albums, Trivium put another cornerstone to the ongoing rise of the American offering that will make them respected even to people that would simply ignore them in the past with their certain and convincing evolution as a band.

‘’Vengeance Falls’’ may not be as aggressive or impressive as ‘’Ascendancy’’ is (and probably they may never again sound so great), but they play with more certainty and attitude compared to when they started, that you gotta give it to them as a large advantage. The rhythm section follows the constant and useful riffs and the vocal changes (which weigh more on the melodic side on this album) keep the listener focused to each track, waiting for a surprise in the change of rhythm or the sudden throwing of a great solo (and believe me, there are a lot of them on ‘’Vengeance Falls’’). The real surprise for me came to the last two tracks, ‘’Incineration: The Broken World’’ (best track on the album) and ‘’Wake (The End Is Nigh)’’, which are the longest ones and show that Trivium can play great even when a track reaches six minutes and keep it interesting in all its flowing.

Three bonus tracks that raise the result are included on the limited edition. Especially ‘’No Hope For The Human Race’’ and ‘’As I Am Exploding’’ could be easily included on the standard edition, as they are way better than some of the standard tracks. The whole trip closes with a Misfits cover that is played in a more metal way and that’s why it sounds better in my ears at least. Trivium managed to surpass the expectations of people once again, and though I prefer ‘’In Waves’’ a little more, this album could stand close to ‘’Shogun’’ or ‘’The Crusade’’ as equal, if not better, though it may not contain the track that could become a real classic. This is the Trivium album based on the whole more than anyone they’ve released so far and its importance will be understood in the future. Hats off once again, the rest may continue bitching about other bands, Trivium are way above such argues.