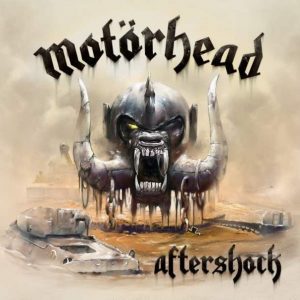 There is an old saying stating that “After a nuclear war, only two creatures will survive. Cockroaches and Lemmy”. Ok, I just made it up, but you get the point! What Motorhead have managed to do is improbable; it is just one of a kind (OK, two of a kind if we count AC/DC in)! Since their first record they have been writing the same chords, the same notes, the same vocal lines, with no change whatsoever in their sound settings or their song structure, yet 36 years after their debut what do they deliver to their fans? A masterpiece they deliver ladies and gentlemen!

The things are quite simple so I’m not going to deal with each song separately. You know the drill when it comes down to listening to a Motorhead album. No song is longer than 4 minutes; intro riff-verse-refrain-solo-repeat is the schematic upon which each song is constructed. At first I was quite dubious about what “Aftershock” was going to offer me since the first two songs can qualify as fillers, a fact that got me thinking that maybe I was about to experience an “above average” album by Motorhead, something uncommon yet never out of the question, since a career this big is bound to have two or three mediocre moments. Oh the ignorance. Apart from these two songs (and the closing track Paralyzed) the rest of the album is a one way ticket to hell with brief stops for surprising beauty. And we are talking about 11 more songs here! I repeat, eleven! After many hearings, I think of it as a responsibility of mine to put “Aftershock”, with no hesitation at all, proudly aside the most acclaimed albums of their career. Motorhead did not rest on the idea of trying to produce a hit song and then build this album around it. No,no,no, they said to themselves “OK, let’s give them 11 hits and let them cope with the result as they jump around in their room not believing that one of the first metal bands can still kick major ass in 2013”. They did this the right way, the 80’s way, when the commercial success of an album was not something guaranteed (since the bands still did not have a legacy that could support them) so the bands had to put all their creativity in an album and produce a fine result.

Songwise, what I am to comment on? Maybe “Queen Of The Damned”, a monster hit of a song that I’ll be damned if they don’t play it in every concert they give from now on? I listened to it about 50 times in a day for Christ’s sake! Maybe “Lost Woman Blues” or “Dust And Glass”, two of the finest blues ballads I’ve ever heard in my life? Maybe “End of times”, which sounds to me like a fresher version of “Killed by death”? or “Going to Mexico”, a song that if you put it in the car stereo in repeat you’ll probably end up in Mexico, just from the thrill it provides you, like a command to go to Mexico wherever you might be? Or maybe the fact that a man almost 70 years old wrote a song called “Keep Your Powder Dry” (???),  and a kickass songs if you ask me! And speaking of Lemmy’s age, his voice is intact! In fact, the time passing by has granted his voice a more mature sense, making it more interesting altogether. Listen to him struggling towards the end of “Keep your powder dry” and appreciate how the breaking of his voice makes it way more intense than what it’d be if he had stuck to the main vocal lines!

All in all, “Aftershock” is one of the greatest musical pleasures I felt in 2013. And that is because, when it comes to metal, we have the misfortune to witness many of the giants of our music produce totally mediocre results for decades now, as if time is passing them by and they can’t follow, or they are trying to adopt in a terribly wrong way. Well, Uncle Lemmy has time pinned down and is throwing punches in its face, screaming “Fuck you! I LIVE TO WIN!” Because a gigantic album in present day, coming from a gigantic band of the past is something we don’t see every day and it makes us feel just like the old days, were the albums produced by the most famous bands of metal justified the fuss around their name. “Aftershock” is the soundtrack of a fight in a biker bar or a car chase shootout with the cops, this much energy it holds within. So, it seems that Motorhead have life figured out after all. Die young as old as possible. May they be around forever.