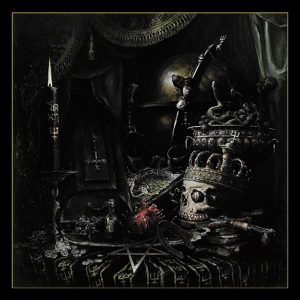 Watain is the birth of Sweden’s long history in black metal. The band got massively active during the 00’s, releasing popular records such as ‘Casus Luciferi’, a record which I personally believe it is their best till today and one of the most favorable black metal records worldwide. The band’s career is characterized from the first years, where their appeal to black metal was pure and old-school and one the other side, the last records of the band, where the trio finds themselves in a constantly battle to remain aggressive but also to approach a mainstream sound and audience as well. ‘The Wild Hunt’, their latest release, is the negative outcome of this battle.

The record as a whole gave me a bittersweet experience. I liked some parts and some songs a lot, but I found myself totally disappointed from the other parts of the record. The moments I considered somehow really strong was two songs off this record; ‘They Rode On’ and ‘The Wild Hunt’. Those songs are for my personal view, the moments where the band is sure for itself and performs with confidence. ‘They Rode On’ is a ballad, totally inspired by Bathory. ‘The Wild Hunt’ is influenced by the specific band too. An epic music pattern is used to create those songs, making me sometimes think if I still listen to a Watain record.

Besides those songs, the remaining ones are considered as a failed try to sound both aggressive and something closer to modern, mainstream metal. I could not find a memorable guitar riff or something to make me feel that this record is special. I really think Watain should reconsider the music style they desire to craft and then clear out the path, holding specific music elements and patterns when they compose. The whole outcome is something less than satisfying, with weaknesses both in sound engineering as well as in the songs by themselves.

Songs like ‘Sleepless Evil’ tend to be more into drums blasting and velocity. However they always miss a specific ingredient; originality and passion. At least that’s what is missing from the record. Just listen to ‘Holocaust Dawn’. This song embraces some cold, black metal feeling, but it is lost just after the very first seconds. I just listen to a record missing the passion.

Watain did not their best to maintain the energy they used to have. The chain of the good records has been broken, with ‘A Wild Hunt’ to be a record ideal for the avoid list of the specific band. I know Watain can do much better and I expect them to compensate with a great record next time.