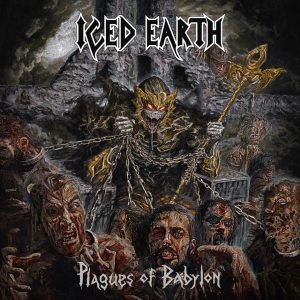 This is one of the most awaited releases not only for 2014 but the whole decade, as Iced Earth’s previous album ‘’Dystopia’’ put them strongly back to the first line of interest after too many years. The departure of Matthew Barlow was quickly forgotten with Stu Block’s performance, the wisest move made in Iced Earth since Randall Shawver left the band in 1997. Jon Schaffer had the right singer to write material that reminded the former glory of Iced Earth and in the end, ‘’Dystopia’’ was a victory for the band, despite the fact that it contained some songs that could be missing, in order to be a little masterpiece. ‘’Plagues Of Babylon’’ is Iced Earth’s eleventh album in twenty three years since the godly self-titled debut. Surely it’s not bad, but it proves out quickly that ‘’Dystopia’’ was only the exception on the rule that they can’t release something that great as in the 1991-1998 period.

None expected the band to release something like their first five flawless albums (I repeat, F-L-A-W-L-E-S-S), but at least they seemed to go on the right direction. As the title track enters, you realize that it should be starting after the second minute, a boring intro gives its place to a marching riff and as soon as you listen to Stu’s voice, you realize he’s in full shape and that he’s the wild card of the album once again. Despite the fact that I feel he’s not as loose as he must-as Schaffer holds him at ease and doesn’t let his real vocal abilities come to light-, Stu is once again raw, persuasive, expressive and direct in his performance. Imagine if he could have room for his passionate screams, like the ones he did on Into Eternity or in tracks like ‘’Boiling Point’’ from the previous album. Then comes one of the best Iced Earth moments of the last fifteen years.

‘’Democide’’ is a track that could be included on any post 1996 Iced Earth album, it is going to be the favorite of the fans for sure and it will make you wonder why there aren’t three, four, five or more tracks like this one on ‘’Plagues Of Babylon’’. A series of good and decent but not that chilling special tracks follows, with ‘’The Culling’’, ‘’Among The Living Dead’’, ‘’Resistance’’, ‘’The End?’’ and the surprisingly good ballad ‘’If I Could See You’’. Tracks that are really good but would never fit in any old Iced Earth album. At least there is an effort from Schaffer’s side to write catchy material that will remain on the fans’ minds, but since Iced Earth started to become catchy, they also started losing a part of their old magic. The problem lies in the lack of energy from a point and on, which is noticed even on the aforementioned tracks.

It’s times where you want to listen to the rhythm guitar marching and the lead guitar deliver some solos of the old times but that’s not happening, so the least damage suffered is that these tracks are not that crappy as I thought would be when I first listened to some album samples. What hurts me the most is the feeling that they missed a large opportunity to win all the fans they once lost (despite they still remain beloved in Greece, that doesn’t mean the fans will always forgive them). I don’t expect the triple-string riffing of the old albums, nor the insane double-bass that used to accompany the guitars, but this mid-tempo and somehow more commercial approach in Jon’s mind seems to hold the band behind and not let it move forward. Also, if I wanted to listen a 62 minute album with 20 unworthy minutes, surely that would not be an Iced Earth one.

‘’Plagues Of Babylon’’ is a good album in the end, mainly because of its first half. Did we need another good album from Iced Earth? Hell no! Did we expect something better than ‘’Dystopia’’? Some of us yes, because of Stu Block’s push given before. Did we get what we expected? Not at all! This could be a good album for Demons & Wizards (with Hansi from Blind Guardian taking part in many tracks as backing vocalist) but the size called Iced Earth requires top moments and this is not one of them. With all its pros and cons, ‘’Plagues Of Babylon’’ is worth the listen, but not the wait. I’ll always love them like the old days, but I feel betrayed this time… By all means, don’t expect tracks like ‘’Anthem’’ or ‘’Tragedy And Triumph’’ here, only some hints of their former glory and an incompleteness regarding the final result. I rate it the way I did only because I expected it worse.