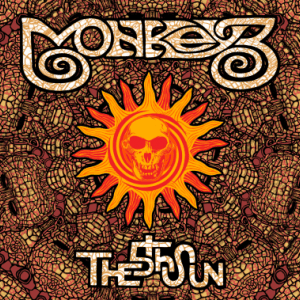 It’s been a while since I last heard a song by Monkey3. I wasn’t a long time fan of the band and there’s not been a year since I have dug into the band’s music.  The four men perform some instrumental music, totally influenced by post rock, as well as with heavier subgenres of metal and rock. Their previous record, ‘Beyond the Black Sky’, is claimed to be their career peak so far, and has been a favor record for the year 2011 by many. Two years after, the band returns with ‘The 5th Sun’, along with a desire to succeed again, proving that their ideas are flowing strong through their minds.

For all those who are not familiar with Monkey3’s discography; the band’s music style cannot be described by any definitions. We could loosely describe it as instrumental-post rock or post-metal, with sludge and stoner elements.  The keyboards play a major role to the song’s progression, creating ambient melodies. The lack of the vocals is covered with unique and significant melodies that could be easily memorized and tend to arouse the senses of the listener.  This is the ultimate goal of monkey3’s music.

Let’s get back to ‘The 5th Sun’ now. The record starts with a fifteen minute song and then continues with six more songs. The first one is titled ‘Icarus’. It is a great one, with beautiful melodies. The continuation of the song leads to points where the music is just ambient, slow and rhythmical and then we have outburst of melodic guitars, crafting a unique trip for our minds.  ‘Icarus’ could be shorter in minutes but this is just my opinion for this song. Afterwards, ‘Suns’ comes upon. The second song of the record is a chilling and quite relaxing one. On the background, we can easily spot the groovy drums along with the groovy bass. Upon those, the band filled the song with plenty guitar riffs and keyboard’s touches, giving a unique sense to the plain bass n drum section.

Birth of Venus’ is the next song, and it is a loosely ambient one. There are a few heavy music outbursts, with the guitars leading in their primitive role. The keyboards’ parts remind me of choir vocals and fit quite well in the songs. Next, we have ‘Pintao’, a song where the bass lines and the keyboards shine and create the song’s continuation. The band created a quite interesting record this far, with mind-travelling songs, but besides ‘Icarus’, none of the other songs managed to shine out of the disc.

The last three songs are faster and heavier than the previous ones. ‘Once We Were’, reminds me of stoner rock in the beginning. After some minutes the song progresses to mid-tempo riffs and ambient paths. ‘Circles’ begin with a haunting and inspiring blues-guitar solo, and the pentatonic guitar-orgasm continues throughout the song. The last song, ‘The Ship’, is another heavy one, just like the previous two.

In overall, ‘The 5th Sun’ is a great record, another milestone for the band.  I can’t decide if it is better than the previous record, which made such an impact, but I’m quite sure that the band continues in a pleasant and satisfying path.