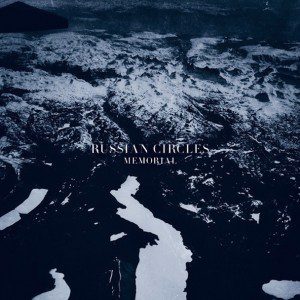 Russian Circles’ music can be described as sounds of experiences, sounds-soundtracks of never directed films. Although an instrumental band, the songs speak out for themselves, being completely clear like old stories written in paper. From their first records like ‘Enter’, to their career peak (Geneva), a large amount of people welcomed the band and Russian Circles has been growing bigger and bigger. Their latest release, ‘Empros’, was the first sample of the band being less productive than in the past. The record did not make the impact ‘Geneva’ has done to me and I honestly consider ‘Empros’ their first record I did not enjoyed that much. However, the band returns with ‘Memorial’, trying to accomplish a larger milestone in their career.

Unexpectedly, ‘Memorial’ is a heavier and darker record than what Russian Circles got us used to. The whole aura, the whole element of the trio’s inspiration in Memorial, creates something frozen and colossal. ‘Memorial’ is also thirty minutes long, fact that isn’t negative at all. If the band desires to record something short in duration but the ideas sound fresh and completed, then it is preferable than record filler along to reach the usual minutes, which a full-length disc contains.

Acoustic guitars with depressive, full of emotions role, open the record. ‘Memoriam’ is the first track, but it’s only a few seconds song. ‘Deficit’ is next, the best and strongest part of the disc. ‘Deficit’ is bizarre; a song with melodies, triplets and destructive drumming. There’s orchestral editing in the song, with the music background and the guitars to create something frozen and intensive. As ‘Deficit’ comes to an end, an ambient song, with violins and dreamy guitars begins. This song is titled ‘1777’, which left me wondering what puzzled information the track’s title is holding. Dave smashes his snare drum, performing totally powerful in this one.

‘Cheyenne’ stands next, with acoustic melodies again. I needed the band to continue their previous pace and not repeat themselves with songs like ‘Memoriam’ again. ‘Cheyenne’ is definitely a filler song, nothing memorable here. ‘Burial’ is the fifth track, with Russian Circles crafting under the commands of the same recipe; loosely, creative drums along with fading triplets on the guitars. ‘Ether’ changes the flow of ‘Memorial’. It sounds like liberation, a happy but at the same moment emotionally ‘sour’ song. Next song is ‘Lebaron’, which along with ‘Deficit’ are the most aggressive moments in ‘Memorial’. Last but not least, ‘Memorial’ along with the voice of Chelsea Wolfe, a talented artist and vocalist. The song is actually a version of the opening track, along with deep, sweet vocals, which would perfectly open the record instead of ‘Memoriam’.

Generally, ‘Memorial’ is a nice record, with a great flow and contains some beautiful music ideas. However, I tend to believe that Russian Circles are somehow stuck in their own musical patterns.  The new records sound almost identical to the past ones, actually making it hard to memorize something unique from the band. ‘Memorial’ is actually better than ‘Empros’, but I wanted to hear more from the band which used to shake the ground under our legs with its.