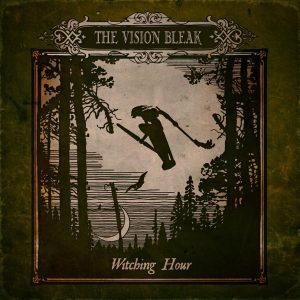 I have to admit that The Vision Bleak where never one of the bands that provoked me with their sound/ music even back in the beginning when the majority of the Gothic Metal community was impressed by their debut album. 10 years after and “Witching Hour” is the German duo’s fifth offering and truth is that by the time I had reached the third track “The Blocksberg Rite”, it was clear to me that this album can’t make it to impress me once again.

Entering a concept and not straying from their usual themes, in this album the The Vision Bleak horror-storytelling puts all believes in witches on paper and music. Crafting an admitedly perfect scenery for the play dealing with supernatural creatures like Pesta (the figure of death and illness in Scandinavian countries and Northern Europe), banshees, cannibal witches and Valkyries, all recruited to give the listener a nice horror movie scenary.The album’s atmosphere created by keyboards (handled by both Schwadorf and Konstanz) along with various eerie sounds borrowed from classic horror movies,really manage to get under one’s skin.

Indeed, you will feel this in the Rammstein-esque “A Witch Is Born” or the Victorian-esque “The Wood Hag” and its ‘Hansel and Gretel’ story that brings in mind images from the foggy England of the early 1600s. Plus, you’ll have the opportunity to deal with some new additions like the haunting flute sounds in “The Blocksberg Rite”, Konstanz’s most versatile and sinister vocals, or some really cool Thrash / Speed Metal arrangements like in my personal favourite “Cannibal Witch” and “The Valkyrie”, showing the band’s extended musical range.

“Witching Hour” is filled with creepy, atmospheric vocal passages and massive guitars that’s going to satisfy the band’s fans. Hands down, The Vision Bleak have created an album that is musically very close to their debut, if that’s something interesting to mention, and I really appreciate how this band continues to refine Horror Metal. Although not being my cup of tea, in case you haven’t (yet) checked these guys, if you’re interested in listening something different, interesting but not as intriguing as it reads..you should listen to these guys even on this album.