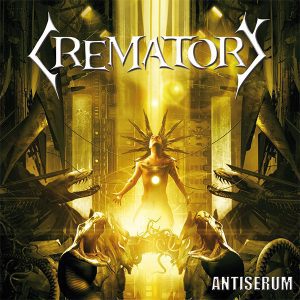 I really admire a band wanting to experiment, and that’s what Crematory having doing all these years. In “Antiserum” the combination of EBM to a lot of their songs and some simple beats, here and there actually sounds more like typical Crematory fare, but the whole attempt, feels rather forced. Even the band themselves have never managed to sound better than what they did in the late 90s up to and including “Act Seven”.

Production-wise, this can be seen as another well produced product from a band that knows what they do and what or how they want to be sounding. Being quite difficult to bring two completely different genres (dance/metal) into one mix is already in itself an admiration factor. But the essence of the tracks contained in here is nothing special at all.

Honestly, I think I might have enjoyed the album much more without all the EBM elements. Crematory are Crematory, they should not try to copy noone or whoever might be flavor of the week. They also never seem to have fully recovered from the departure of Lothar Frost, their original guitarist (who sometimes would also sing) with whom their recorded some of their finest albums. Since after his departure the band seemingly never recaptured the exactly same majestic “gothic” feeling in their sound.

To me “Antiserum” is a bold attempt at experimenting, for which the band deserves props, but they ultimately fail to deliver something that will appease. Phantoms of the past is what I’ d like to call it. Stack in the past “Antiserum” confuses even more their fanbase with what their new average repertoire.