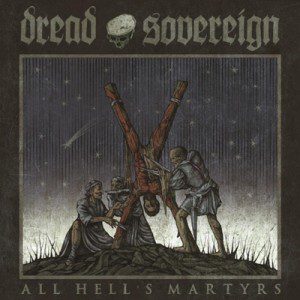 Alan Averill’s career via Primordial is a grand one and the man has put vocals into some of the most favorite music records of all the metal fans in the world. In the same time Alan is always busy with side projects and his newest one is Dread Sovereign, an epic doom band, which finally has released its first full-length record, ‘All Hell’s Martyrs’. When I first listened to the debut of Dread Sovereign, I didn’t know the participation of Primordial’s drummer and vocalist in it, so I got an independent opinion about it.

The band embraces the epic doom metal music style and is influenced by the early Candlemass with a little touch of occult metal and black metal. The listener won’t find fast riffs or blasting drums in this record, just heavy, slow riffs and a fey attitude. The lyrical themes are mostly the ones Alan uses to Primordial, mixing anti-christianity with occult. I was curious to find out about his vocal lines but he amazed me with the deep and gracious voice of his. I was expecting some more significant riffs but the meaning and the beauty of the record is to the mood it certainly creates to the listener.

The record contains some instrumental and transitional songs, along with the main ones which are some slow and powerful epic metal tracks. ‘Pray to the Devil in Man’ is the peak of the record in my opinion. It is a significant song, with vibrato guitar riffs and ambient drums. Alan is the preacher and with his voice we travel away, to times we never got in touch with, in the romanticism of the old world. In ‘Wield the Spear of Longinus’ the bands perform really slowly, almost in drone’s velocity. Dread Sovereign tries to sound as doom as it gets, even if that means for the band to create a record with songs above the ten-minutes long and without many changes in them.

In ‘All Hell’s Martyrs’ we find some great guitar solos. The guitars are mostly influenced by the doom records of Sabbath and bands like Candlemass who actually helped to characterize the epic doom genre. The record as far as duration is concerned is not tiring at all and I must say, I got pretty frustrated with many fans that are still tired of doom metal when it is played correctly and by great musicians.

Closing the review, the conclusion justifies Dread Sovereign. The band managed to create a great epic doom record, a memorable one and I think that they have a great future in the specific genre. Try to keep in touch with Dread Sovereign and whenever you feel the need to take a break from Primordial’s ambient black metal, just listen to ‘All Hell’s Martyrs’. You won’t regret this!