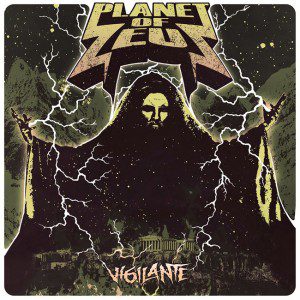 Yes after three years Planet of Zeus are back! The band, which renewed and helped the stoner rock scene grow bigger and bigger, released their third record three years after “Macho Libre”. There’s no need to include anything more about the band’s importance in the greek stoner scene, because everyone who viewed the scene from the inside is able to agree with the previous statement and add Planet of Zeus along with Nightstalker in the bands that influenced a whole music scene here in my country.

Planet of Zeus’ style was always a bit more straight-edged from other stoner rock bands. The band was performing harsh and closer to the ‘Clutch- style’ of performance, rather than closer to all those ambient stoner rock groups around. Babis is a raw vocalist and his vocal abilities are quite noticeable in the band’s career.

‘Vigilante’, however, is somehow different from their previous two records. As far as the music is concerned, Planet of Zeus still sticks with the aggressive, stoner rock style. The vocals on the other hand, are less aggressive, less harsh than the previous records (except in ‘A Girl Named Greed’ or ‘The Beast Within’). ‘Second Coming’, ‘No Tomorrow’ and about the whole record contains groovy, blues-inspired guitar riffs and explosive drumming. Their style now seems to be greatly influenced by Clutch, which is not particularly negative.

In comparison with their previous records, ‘Vigilante’ can be characterized as the most ‘safe’ one, if I am allowed to use this term in a record review. The band risks nothing; only creates some good stoner rock anthems for their fans. In fact, I was expecting them to come back this year with a record full of changes or new ideas, but Planet of Zeus chooses to stick with all those which made the band famous the last years. I can understand the name they are building and maintaining constantly, but I would wish the band to create something we as fans haven’t listen in the past from Planet of Zeus. I wanted the band to surprise us.

To be fair, ‘Vigilante’ is a record full of life and this is easily noticeable into the music, which could easily become the soundtrack of an after midnight, drinking party. The quality is not something negotiable when it comes for Planet of Zeus to compose an album. But we have seen better of them and we expected more for a band which can pretty much create in a high level of inspiration. It would be awesome for example to include more songs like ‘The Beast Within’, which contains patterns of different music styles and an extreme version of their stoner rock.