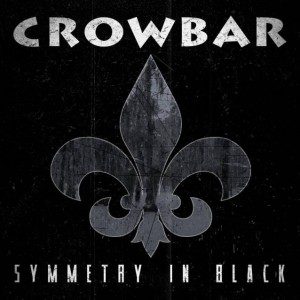 Kirk Windstein shocked everyone when he resigned from his position as a guitarist of the Down, to focus on his personal band (Crowbar) and to the promotion of the record they were about to release. Considering Down’s condition right now, I would note that Kirk made the right choice! The specific statement is justified by Crowbars’ next record, ‘Symmetry in Black’, which was released this month. ‘Symmetry in Black’ is the Louisiana-based band’s tenth full-length record and maybe one of the best by them.

Crowbar is well-known for creating psychotic records; heavy ones, with edgy, blues guitars and lyrics which criticism almost every harsh aspect of life and society. ‘Symmetry in Black’ does not differ. The band is closer to doom metal than ever, creating songs which seem not to fit into the classic sludge label as in ‘Crowbar’ for example. However, Kirk and the band use some of their most powerful riffs into songs like ‘Symmetry in White’ (a referrence to the record’s title), ‘The Taste of Dying’ or ‘The Foreboding’. Groovy guitars participate into an orgasmic continuation of songs and ideas. ‘Amaranthine’ is the acoustic song of the record; a great and emotional ballad, which is easily included into the record’s best moments. The deep and low vocals of Kirk are ideal for songs like these.

Kirk’s vocals may not be as deep as they used to be, but they are pretty satisfying for their style of music. The majority of the songs express thoughts of a man who is now mature enough to perform a flashback into his past and criticize almost everything. The record’s opening track, ‘Walk with Knowledge Wisely’, reflects the condition of the band’s songwriter (Kirk Windstein) and the psychological profile which was mentioned before.
Most of the songs are based on pentatonic- guitar riffs, with a great amount of lead melodies combined and heavy drumming. The rhythm section (drums and bass) are totally providing the harshness and the majesty which characterize ‘Symmetry in Black’. The sound is modern but kind of close to the 90’s patterns of sound engineering, reminding of the band’s first records. This was a total surprise, because most of the sludge and doom metal bands nowadays either choose an old-school sound just like Eyehategod or tend to create records which are a result of a overwhelming and compressed sound.

‘Symmetry in Black’ is considered as one of the band’s greatest moments so far. After the release of ‘Sever the Wicked Hand’, Crowbar return with an equally great record, maybe greater than the last three. However, the band could have included fewer songs in this one, to help the flow of the record. Along with Eyehategod’s return from the dead, ‘Symmetry in Black’ is something Louisiana’s metal scene should be proud of.