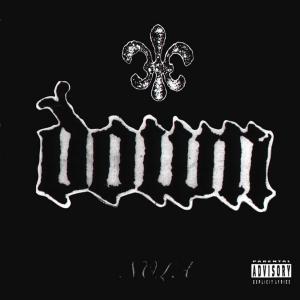 Supergroups are the most interesting part of our music history; diamonds being crafted by men who have inspired millions, just to continue the large effort to fulfill their desires and anticipations. In the 90’s something was luring in Louisiana, US. Phil Anselmo, (frontman of Pantera), Peeper Keenan (Corrosion of Conformity), Kirk Windstein (Crowbar), Jimmy Bower ( EHG, Crowbar) along with Todd Strange ( Crowbar) formed a new band under the influence of Sabbath, Trouble and other doom bands. Down was born under the hot sun of Southern US. Without losing any time, the band recorded a three song demo, heating up the underground scene till they signed a contract with Electra Records. Their first record was set to be recorded. The recordings took one year to be completed and the album was ready by the January of 1995.

Here we are, having NOLA as the start of Down’s music career. The record includes thirteen songs, without even one of them to be considered as fillers. Down managed to create a unique music style. It touched sludge’s rise of 90’s, without to be slow or heavy enough for a sludge record. It featured southern guitars, full of distortion riffs and a bad-ass attitude. Pepper’s and Kirk’s play is one of the most notable in my ears, combining the groove rhythms with aggressiveness, creating break-downs and riffs which force the listeners into massive headbanging.

In details, the record begins with ‘Temptation Wings’, a song about drugs and heavy lifestyle. The track strikes with groovy guitars and Anselmo singing at his top of his voice. Blues guitar solo characterizes ‘Temptation Wings’ leading the path to the second song ‘Lifer’. If I could pick out one song of this album, it would be ‘Lifer’, because of its aggressiveness and energy. ‘Lifer’ is fast, heavy and destructive. It is the ideal song for heavy moshing in concerts and Down proves it every time they hit ‘Lifer’s’ first notes. Afterwards, ‘Pillars of Eternity’ comes knocking, reminding us of the band’s doom influences. The song is definitely a ‘Black Sabbath’ one! The fourth song, ‘Rehab’ talks about the alcohol abuse and the struggles of not giving in your life to narcotics. Down, leaves behind velocity and plays slow groovy melodies combined with southern elements.

The next two songs, ‘Hail the Leaf’ and ‘Underneath Everything’ raise the heat with violent melodies and strong vocals. Anselmo’s voice feels like punches in the head, combined with the guitar harmonics in ‘Hail the Leaf’. The lyrical theme is common in here too; marijuana and economic struggles. The seventh song of NOLA, ‘Eyes of the South’ is a lovely one. The strongest part of it, hides within the clean guitar part, with the ‘crying’ vocals of Phil, while the next song ‘Jail’ reminds ‘Planet Caravan’ of Black Sabbath in its entirety. ‘Pray for the Locust’ is another acoustic one, along with ‘Jail’.
‘Losing all’ and ‘Swan Song’ include the most unique riffs Down ever created (especially ‘Swan Song’). Along with ‘Stone the Crow’ they close the final moments of the record in a perfect way. ‘Stone the Crow’ was the record’s single and a hit song. It is a southern rock song with heavy parts and slide guitars. Last but not least, ‘Bury me In Smoke’, a song written by men for men and only! Attitude at its finest moments!

Closing the review, I find it difficult to describe the treasure this albums holds within its tracks. Down made a heritage for the modern groups to follow and get inspired from. For stoner metalheads and doom lover to classic metalheads, NOLA never disappoints. Eighteen years later, the record is considered already classic and Down one of the best active bands in our days. Many many thank you to Anselmo and the band for all those moments which came by under the influence of their hostile riffs.