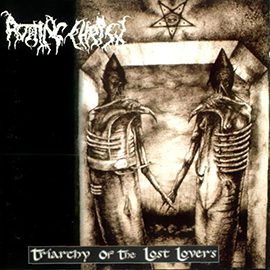 It’s 1996, a small band that started from Athens, Greece 7 years before, given the blasphemous name Rotting Christ has reached one of its creative and commercial peaks. For old school Black metal fans these might be the debut masterpiece “Thy Mighty Contract” (1993) by Osmose Records (around that time they toured with Immortal and Blasphemy in Mexico), or “Non Serviam” (1994) by the well-known Greek Unisound Records. But the real breakthrough in terms of commercial success came with the new contract with Century Media and a new sound more melancholic and more epic sounding. The melancholy though according to Sakis Tolis (guitars/vocals) himself came from him and his brother Themis (drums) suffering with measles during the recordings.

The album was called “Triarchy Of The Lost Lovers” and produced at Stage One studios by Andy Classen (husband of the beastial female Thrash metal vocalist Sabina Classen of Holy Moses). It kicks in with one of the greatest classics in Rotting Christ live shows, “The king of the inner dominion, the circle of the lost lovers…“, for those who haven’t heard it it’s “King Of A Stellar War” a black metal epic in the essence of Bathory and Celtic Frost combined destined to cause headbanging for all eternity as well as the upcoming track called “A Dynasty From The Ice” showing the beautiful melodies taking the listener on a journey over the Greek setting sun and the beautiful Greek landscapes. All that without forgetting the basic principles of great Black metal riffage, made evident in the next song “Archon” bringing up the speed in the record, even though the intro riff sounds like something Judas Priest would write. “Snowing Still” is one of the most mellow and heavy tracks of the record with beautiful melancholic melodies sending shivers up the listeners’ spine (“All my dreams, take me backwards…).

After that, “Shadows Follow” starts with a old-school melodic Black metal riff going midtempo throughout the song including an amazing chorus made for headbanging and chanting along (“The Shadows Follow and swallow me!“). Headbanging session continues with one of the best riffs of the album at the beginning of “One With The Forest” that snapped the writers’ neck the first time he listened to it. Another midtempo track full of melodies in the verses and some speedy riffing after the solo. “Diastric Alchemy” a more melodic track comes up next to keep up the speed from the previous one. “The Opposite Bank” has two sides: the melancholic heavy introductional one and the sped-up Black metal one after the middle. A true epic closes this masterpiece called “The First Field Of The Battle” including another speedy Black metal section right after the epic/melodic riffage done Rotting Christ style and indicating some keyboards for the first time on the record. It fades out with that amazing melody of the chorus played again and again.

The digipack includes two smashing covers of Kreator‘s “Tormentor” and a medley “Flag Of Hate/Pleasure To Kill” later included in “The Mystical Meeting” EP (1997). This album is the ultimate example of how Rotting Christ could balance melody, epic feeling and Black metal riffage in order to make their third and most mature masterpiece. It’s like their own “Black Album“, if you wish. Keep counting days to this weekends celebrational live shows!! Keep the horns rising brothers and sisters!