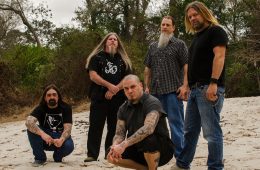 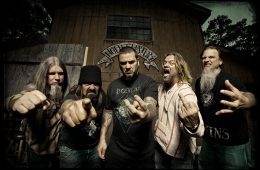 DOWN: ‘We Knew Him Well’ Video Released 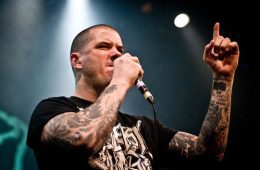 ANSELMO To Be Honored With ‘Musical Artist Of The Year’ Award 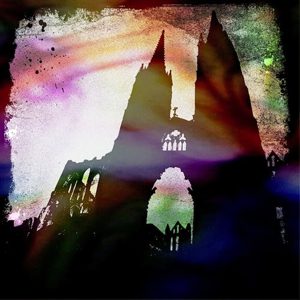 Panagiotis KaragiannidisMay 16, 2014
After the release of the first part of a series of three EP’s, Down came back for the second one (this time without Kirk on the guitars!). For those who aren’t familiar with the project, the band decided to release a series of EP’s, which style ranges between the band’s influences as musicians.
03 min read 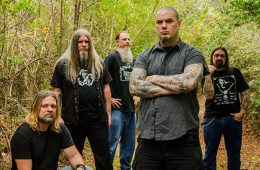 DOWN: ‘We Knew Him Well’ Video Premiere

Panagiotis KaragiannidisMay 13, 2014
The official video for "We Knew Him Well" from DOWN's new EP "Down IV Part II" that hits the stores today, is available for streaming.
00 min read

Panagiotis KaragiannidisMay 5, 2014
DOWN played the brand new song "Conjure" live for the first time ever this past Saturday, May 3 at The Orange Peel in Asheville, North Carolina.
06 min read

Manos SpanosFebruary 28, 2014
DOWN will release a new EP, "Down IV - Part Two", on May 13 via Down Records/ADA Music. Tracked at Nodferatu's Lair — iconic vocalist Philip H. Anselmo's home studio — and produced by Michael Thompson, Anselmo and DOWN, the new EP is the eagerly anticipated sequel to "Down IV - Part One". The new offering from DOWN is packed with the quintet's signature gargantuan riffs, swamp blues leads, crashing drums and hypnotic howls, upholding a certain tradition that countless fans celebrate, expanding their own musical mythos as they leave its pillars intact and untouched. In support of the upcoming record, DOWN will take their renowned live show on the road this spring, joining BLACK LABEL SOCIETY and DEVIL YOU KNOW on a North American tour. The tour, which also includes DOWN headlining shows and festival appearances, begins at Iron City in Birmingham, Alabama on May 2, and ends at Rocklahoma in Pryor, Oklahoma on May 25. The run also includes an appearance on May 24 at Emo's in Austin at the "Rock the Heart" concert, a benefit for the late Mike Scaccia's (RIGOR MORTIS, MINISTRY) "Heart Rock" foundation, with the goal of raising awareness about heart disease. When Anselmo, Pepper Keenan, Jimmy Bower, Pat Bruders, and Bobby Landgraf retreated to Nodferatu's Lair at Anselmo's Lousiana home in the fall of 2013, things had changed a bit. For the first time in the band's storied career, Kirk Windstein wouldn't be handling guitar duties alongside Keenan. Instead, longtime "family" member, stage manager, and HONKY guitarist Landgraf took the reins. "He was immediately at home," affirms Anselmo. "Bobby had always been that guy in case of anything. Knowing his personality, he really locked in with what we do and took it to heart. He made himself belong. Honestly, the first day he came down he contributed a very strong riff to a key song. There's that Southern element, which is imperative. I also catch a real old heavy metal vibe from this record. I can't stress this enough. He took it all on, and he did a fucking awesome job." Keenan adds, "Even with the lineup differences, it's interesting how the songs still sound very DOWN. Bobby and I have always locked in. It's not just physically either, but mentally as well. We see eye-to-eye, and he's been watching for a long time." "It was a big deal for me," beams Landgraf. "I drove ten hours up from Texas that first day, cracked a beer, and plugged in. We jumped right into the room, and I played this part. They all smiled. That was the moment for me. I'm a longtime fan, and I knew we were friends, but being a part of the writing and working towards something together was just incredible. As a guitar player, one of my goals was to be in a group like this. I want to make everyone proud." The fans will undoubtedly take pride in this collection as well. Making good on DOWN's promise of a series of EPs, the second installment sees a pronounced progression amongst the individuals themselves as well. "We wanted to back up our word as far as releasing these EPs," Anselmo goes on. "Everybody was fixated on that. This is the shortest period of time between our releases, and every one stepped it up and upped his game. Keenan, Bower, Bruders and Landgraf all contributed some excellent riffs. Having all of this fresh input makes for a different listen and a new perspective on what DOWN should and does sound like. All of that yields a unique record off the bat." For the future, DOWN's sights are set on endless touring. Landgraf made his formal stage debut when the band headlined Anselmo's first annual Housecore Horror Film Festival in front of a packed audience of the faithful in October 2013. Now, it's just about bringing that inimitable sound everywhere possible. "Down IV - Part Two" track listing: 01. Steeple 02. We Knew Him Well 03. Hogshead/Dogshead 04. Conjure 05. Sufferer's Years 06. Bacchanalia downivpart2
04 min read

Manos SpanosFebruary 6, 2014
DOWN has been confirmed as the "first special guest" on this year's Revolver Golden Gods Tour, presented by Epiphone. The trek, which will be headlined by BLACK LABEL SOCIETY, will kick off on April 16 in Portland and wrap up on June 7 in Los Angeles. Also rumored to be appearing on the bill is DEVIL YOU KNOW, the new band featuring former KILLSWITCH ENGAGE singer Howard Jones; Francesco Artusato, celebrated solo artist and guitarist with ALL SHALL PERISH and THE FRANCESCO ARTUSATO PROJECT; and John Sankey, drummer for the Australian band DEVOLVED, who has also worked with FEAR FACTORY and DIVINE HERESY. Revolver Golden Gods Tour dates: Apr. 16 - Seattle, WA - Showbox Sodo Apr. 17 - Portland, OR - Roseland Apr. 18 - Boise, ID - Knitting Factory Concert House Apr. 19 - Missoula, MT - Wilma Theater Apr. 21 - Billings, MT - Shrine Auditorium Apr. 25 - Milwaukee, WI - The Rave Apr. 26 - Nashville, TN - Marathon Music Works Apr. 29 - Ybor City, FL (Tampa) - The Ritz Apr. 30 - Lake Buena Vista, FL - House of Blues May 02 - Birmingham, AL - Iron City May 04 - Silver Spring, MD - Fillmore May 05 - Clifton Park, NY (Albany) - Northern Lights May 07 - Philadelphia, PA - Electric Factory May 08 - Worcester, MA - The Palladium May 09 - Sayreville, NJ - Starland Ballroom May 10 - New York, NY - Best Buy Theater May 12 - Norfolk, VA - Norva May 13 - Stroudsburg, PA - Sherman Theater May 15 - Pittsburgh, PA - Stage AE May 17 - Ft. Wayne, IN - Piere's May 19 - Sioux Falls, SD - The District May 20 - Chicago, IL - House of Blues May 21 - St. Paul, MN (Minneapolis) - Myth May 23 - Grand Prairie, TX (Dallas) - Verizon Theater May 27 - New Orleans, LA - House of Blues May 28 - Houston, TX - House of Blues Jun. 01 - Denver, CO - Ogden Theater Jun. 02 - Salt Lake City, UT - The Complex - Rockwell Jun. 04 - Tempe, AZ - Marquee Theater Jun. 05 - Las Vegas, NV - Brooklyn Bowl Jun. 06 - San Francisco, CA - Regency Ballroom Jun. 07 - Los Angeles, CA - Fonda Theater DOWN has completed work on its new EP for a spring release. The CD was recorded at singer Philip Anselmo's New Orleans studio, Nodferatu's Lair and is the second in a series of EPs to be released over the next few years, each touching on a different aspect of the band's sound. Speaking about the band's new material, DOWN guitarist Pepper Keenan told the "Metal Hammer" radio show: "It's kind of slight continuation of the first EP, but it's a little bit more… It's hard to say, man… It's more… I wouldn't say 'aggressive,' but it's definitely got some freaky guitar stuff on it. And it's definitely got a pretty good groove factor. And we spent a lot of time trying to make all the songs [fit together stylistically]. We had several songs that didn't quite match it, so we kind of [set them aside] and we're gonna move them to another EP. But it's got a super-heavy vibe to it, man. I mean, I'm really excited about it. Everybody in the band is excited about it." He continued: "We wrote it kind of like we did the 'NOLA' record. Each one of us had some riffs and we got in a room and we just hashed it out like the old days — just going off each person's experiences and ideas. Everybody's ideas were valid, and it really ended up being well rounded and slamming. It was [a] very creative [process], let's put it that way. Actually, it was surprising some of us how much we really still got it." Pepper also spoke about the cover theme for the next DOWN EP and how it will be connected to last year's "Down IV Part I - The Purple EP". "When the second [EP] comes out, you'll see it as being an extension of the last cover," Pepper said. "So number 2 is gonna connect sideways to number 1, and you'll start to see a morphing kind of process. There's some kind of liquid light kind of thing that's kind of melding across as you go… I hate to quote the overall color, but I believe it's something like orange. I haven't looked at it in a while. It might not be orange yet, but it's heading in that direction." Released in September 2012, "Down IV Part I - The Purple EP" sold 12,000 copies in the United States in its first week of release to debut at position No. 35 on The Billboard 200 chart. Guitarist Kirk Windstein recently left DOWN and was replaced by Bobby Landgraf, the band's former guitar tech who was previously in GAHDZILLA MOTOR COMPANY, a 1990s outfit also featuring Jason McMaster (DANGEROUS TOYS, WATCHTOWER), and HONKY. "I couldn't feel more blessed," Landgraf, 48, said in an interview. "Phil could've gotten anyone to play guitar, but I've been jamming with them during soundchecks, so they know we can play together." "It's really a dream come true," added Landgraf. "It's what you're working for all those years." The new BLACK LABEL SOCIETY studio album, "Catacombs Of The Black Vatican", will be released in Europe on April 7 via Mascot Label Group and one day later in North America through eOne Music. BLACK LABEL SOCIETY recently amicably parted ways with longtime guitarist Nick Catanese and replaced him with Dario Lorina (LIZZY BORDEN). blacklabelsocietyrevolvertour2014
05 min read 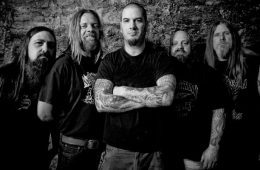 DOWN Completes Work On New EP

Panagiotis KaragiannidisDecember 23, 2013
Source: Blabbermouth.net DOWN has completed work on its new EP for an early 2014 release. The CD was recorded at singer Philip Anselmo's New Orleans stud...
03 min read 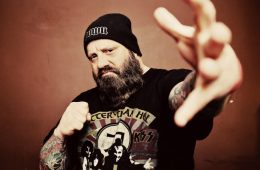 KIRK WINDSTEIN: Why I Left DOWN