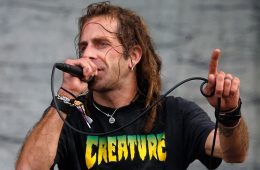 Manos SpanosDecember 4, 2013
According to Amazon.com, Da Capo Press has set a June 24, 2014 North American release date for LAMB OF GOD vocalist Randy Blythe's memoir, "Dark Days: My Tribulation And Trials". Random House has purchased the foreign rights to the book and will act as publisher in the U.K., Australia, New Zealand, and South Africa. The memoir, which puts emphasis on the past year of Randy's life, is an incredible, harrowing, heartbreaking, and redemptive story told in Blythe's already well-recognized writing style. It seems that almost every major media outlet has attempted to righteously cover the story of Blythe's arrest, incarceration, trial, and acquittal for manslaughter in the Czech Republic last year, but now, the man at the center of it all unveils the truths of the ordeal, personally detailing every aspect in his own words. No ghost writers, no co-authors, just Randy Blythe himself. The rights to Blythe's book were sold to Da Capo executive editor Ben Schafer by Marc Gerald at The Agency Group. "While I've dreamed of being a published author almost since I began to read, I never imagined my first book would center around such a sad topic," says Blythe. "Sometimes though, life unexpectedly provides you a story that needs to be told. I believe this one does (for several different reasons, not just for the benefit of myself), so I will tell it with the respect and dignity all involved deserve. This will be a good read, I promise you, and I hope some good comes of it." Added Schafer: "I knew that Randy was a master vocalist and lyricist but it turns out he is a vivid and visceral prose writer as well. "Regarding his arrest and trial in the Czech Republic, Randy handled a frightening and heartbreaking situation with courage, grace, and humility, and we at Da Capo Press are honored to have the opportunity to have a part in telling his story." Da Capo Press, a member of American publishing company the Perseus Books Group, is an excellent home for Blythe's memoir, having already published several other books by heavy metal greats like Tony Iommi (BLACK SABBATH), Corey Taylor (SLIPKNOT, STONE SOUR), Rex Brown (PANTERA, DOWN, KILL DEVIL HILL) and Al Jourgensen (MINISTRY). Prague, Czech Republic's High Court upheld Blythe's "not guilty" verdict on June 5 in connection with the death of a fan three years ago. The court's decision is final. A three-judge panel on March 5 acquitted Blythe of manslaughter in the death of 19-year-old Daniel Nosek. Blythe was facing the possibility of conviction and a long-term jail sentence after a May 2010 incident in which Nosek, who attended a LAMB OF GOD performance in Prague, died almost a month later, allegedly from injuries sustained when he was thrown off the stage. Though Blythe faced up to 10 years in prison, during the closing argument, prosecutors only asked the judge for the minimum sentence of five years.
03 min read

LAMB OF GOD Frontman Releases ‘Prague: The Devil Is The Details’ Short Film

Manos SpanosAugust 23, 2013
Vocalist Randy Blythe of Richmond, Virginia metallers LAMB OF GOD has uploaded a short film called "Prague: The Devil Is The Details", which he shot earlier this year while he was on trial for manslaughter in the Czech Republic in connection with the death of a fan more than three years ago. In a posting on his Randonesia blog, Blythe stated about the film: "This is a movie I made in Prague during my trial. I filmed the footage with a Canon EOS 60D, edited it with Final Cut Pro X, and wrote the music using Reason. "I wanted to release a slightly different version of the film right before my judgement was rendered by the court (the very last shot in this version was not there until after I was pronounced innocent). My idea was to show my mind set through film and music during the process of my trial, and have a more ambiguous ending heading into my final day in court.
03 min read 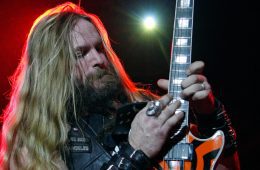 Manos SpanosJune 24, 2013
Anthony Morgan of Metal Forces recently conducted an interview withBLACK LABEL SOCIETY frontman and ex-OZZY OSBOURNE guitaristZakk Wylde. A couple of excerpts from the chat follow below. On the paperback release of his book, "Bringing Metal To The Children": Zakk: "The book all started from me and Eric [Hendrikx, co-author] just sitting around, talking, like any of the guys. It'd be like me and you sitting at the bar, talking about 'You're not gonna believe what happened the other day,' and this and that. It's the music business, where there are no rules [laughs]. There's no qualifications; you don't have to have a Master's degree. You just show up and you're there, but that's where you get the cast of characters, and that's where you get all of the comedy man. Like I always say, it's unimportant people making important decisions. They have no business doing what they're doing, but that's how it gets run. Anywhere else, if you wanna apply for a job welding or being a brain surgeon or any of that, you have to have a degree and you have to have a license, and everything like that [laughs]. Not in the music business, though. But yeah, it just came out of funny stories and us just laughing our balls off, talking about how ridiculously goofy the music business is. That's how the book came about, me saying 'You've gotta write a book about all this crap someday.'"
04 min read 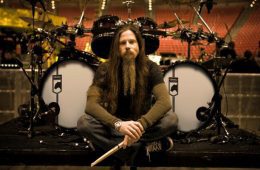 Manos SpanosJune 21, 2013
Rashod Ollison of The Virginian-Pilot recently conducted an interview with drummer Chris Adler of Richmond, Virginia-based metallers LAMB OF GOD. A few excerpts from the chat follow below. On LAMB OF GOD singer Randy Blythe's arrest in the Czech Republic in June 2012 on manslaughter charges and the subsequent legal ordeal, which took more than eight months to play out: Adler: "Not only were we not able to generate any income, but we ended up having to pay more than half a million dollars in legal fees. It bankrupted the entire band; [there was] no money left for any kind of payroll or anything. When Randy was acquitted [in March of this year], everything was on the line at that point. Either it was completely over, or we had a chance to get back out there and pay these bills and get ourselves back on our feet." On what he did during LAMB OF GOD's hiatus from touring, including playing drums on an album by the metal band PROTEST THE HERO:
02 min read

LAMB OF GOD Frontman Collaborates With CORROSION OF CONFORMITY Members

Manos SpanosMay 9, 2013
Source: Blabbermouth LAMB OF GOD frontman Randy Blythe has collaborated with members of CORROSION OF CONFORMITY on a song that will be released as part o...
01 min read

Manos SpanosFebruary 4, 2013
LAMB OF GOD frontman Randy Blythe has returned to the Czech Republic to stand trial on charges of manslaughter in the death of a fan at a Prague concert mor...
03 min read