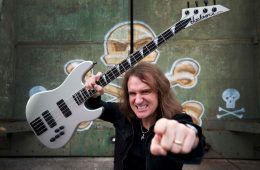 Panagiotis KaragiannidisFebruary 15, 2015
MEGADETH bassist David Ellefson says that he was "shocked" to learn of...
02 min read

MEGADETH’s SHAWN DROVER: ‘Record Buying Is Slowly Becoming A Thing Of The Past’

Manos SpanosMarch 31, 2014
Earlier this week, Michael "Mick" McDonald of the National Rock Review conducted an interview with MEGADETH drummer Shawn Drover. You can now listen to the chat using the audio player below. A couple of excerpts follow (transcribed by BLABBERMOUTH.NET). On whether MEGADETH will try anything new, stylistically speaking, on its next studio album: Drover: "I don't think so. We definitely branch out to a couple of different areas, stylistically speaking. For me, I'm always an advocate for the heavy stuff, so that's usually what I present to the band — something a little more violent, a little more heavy and oftentimes fast stuff. Because that's how I write. Of course, MEGADETH has done so many different kinds of metal over the years, but for me, I'll always try to represent the more furious side of it, because that's just part of who I am, it's part of my creative DNA to try to write heavy riffs. Whether it gets accepted not, it obviously just depends on how it's going [with the writing process for] the record. We all have so many ideas, not everything is gonna make it. Case in point, on the 'Endgame' record, I had a song called 'Head Crusher', which was a pretty fast, heavy song. It was the first single, the first video and it was nominated for a Grammy Award. So you always try, but you just never know what you're gonna end up with. It just depends on how the recording process goes. But I'll always have ideas to submit, certainly." On how music downloading has affected the record industry and rock bands in particular: Drover: "If you're a real fan, you're gonna buy the product. And nowadays it's [done largely] through iTunes or Amazon or Spotify or things of that nature. But, to be honest, a lot of kids don't. And their theory is, 'Why should I spend fifteen dollars on something when I can get it for free?' You just go to a torrent site and you can have it [for free] in a matter of seconds. I think a lot of this younger generation, and not to generalize, [because this doesn't apply to] everybody, but a lot of people, a lot of the younger people, and maybe even the older people, they're, like, 'Why should I buy a record when I can get it for free?' Not even thinking of the damage that it has done to the music industry since this whole Napster garbage started over 15 years ago that's caused irreparable damage to the music industry. It's not debatable; that's a fact." "This could turn into a really long and potentially depressing conversation, but it is what it is, and it happened. Until somebody can figure out how to change this, whether it's some kind of new format, or something that you can't… I think if someone could find a format where you could purchase a product and there's no way that you could copy it or get it on a torrent site, then that would obviously help the industry. But that's wishful thinking, I think, on my part. I just think the damage has been done now and record buying is slowly becoming a thing of the past. And certainly, to a large degree, record sales are down right across the board. You don't see bands selling 15 million albums, like DEF LEPPARD's 'Hysteria' or all the pop [albums], like the MICHAEL JACKSON records and the MADONNA records, I don't see anybody selling eight, 12, 13 million albums anymore. It's just not happening." MEGADETH latest album, 2013's "Super Collider", sold 29,000 copies in the United States in its first week of release to land at position No. 6 on The Billboard 200 chart. "TH1RT3EN" opened with 42,000 units back in November 2011 to enter the chart at No. 11. The band's 2009 CD, "Endgame", premiered with 45,000 copies to debut at No. 9. This was slightly less than the 54,000 first-week tally registered by 2007's "United Abominations", which entered the chart at No. 8. 2004's "The System Has Failed" premiered with 46,000 copies (No. 18) while 2001's "The World Needs A Hero" moved 61,000 units in its first week (No. 16). Interview (audio):
04 min read 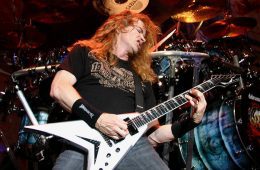