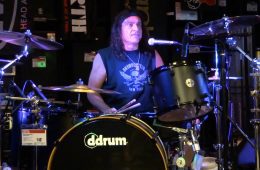 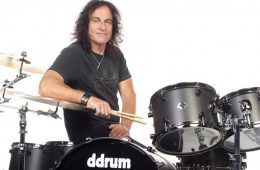 VINNY APPICE: The Music Industry Is ‘A F**king Mess’ 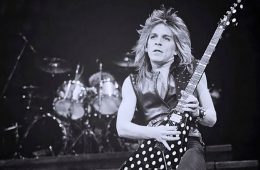 Panagiotis KaragiannidisJanuary 22, 2015
One of the most venerated guitarists ever to...
04 min read 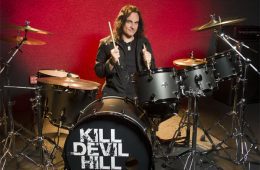 Manos SpanosMarch 19, 2014
On March 14, rock journalist Mitch Lafon conducted an interview with legendary drummer Vinny Appice (BLACK SABBATH, HEAVEN & HELL, DIO, LAST IN LINE, KILL DEVIL HILL). You can now listen to the chat in the YouTube clip below. A couple of excerpts follow (transcribed by BLABBERMOUTH.NET). On writing new, original material with LAST IN LINE — the band featuring DEF LEPPARD guitarist Vivian Campbell alongside fellow founding DIO members Vinny Appice, Jimmy Bain and Claude Schnell, plus singer Andrew Freeman, who has previously fronted HURRICANE and LYNCH MOB: Vinny: "Yeah, we started writing, and it's gone great. 'Cause that's the hard part. OK, it's easy to get together and play the old songs and have fun and go out and play. And then it comes down to, 'OK, we're gonna write next week.' Then you don't know how it's gonna go, because we haven't been in a room writing together for 30 years. And it went fantastic. We've got about five tunes written, and they're really cool, and they sound like us; they sound like DIO. And it's very interesting how quickly it came together. And we're happy about it, we're having fun down there exchanging ideas. It's really, really a good vibe. It's nothing where there's any attitudes or egos or anything like that; it's wonderful, actually. And this way, when it's in that environment, you can express your ideas without having to worry or think about some guy that's gonna go, 'Well, I don't think that's good,' or, 'No, we shouldn't do it that way.' All the ideas are put out there and we go, 'Yeah, that's cool. Let's try it.' There's no quarrels, there's no attitudes. It's really cool. So it's going great. In April, we're going into the studio to record a couple of [the songs], so we have some stuff down. And it looks like we have a pretty nice record deal sitting there. And Steve Strange from Europe — he's a very famous guy in Europe — he's handling the band, and he is in the driver's seat, and we've got a great driver." On his decision to leave KILL DEVIL HILL: Vinny: "It wasn't a musical breakup at all. It was more of… What you wanna do with… I mean, I started the band; it was my band and then Rex [Brown, former PANTERA and DOWN bassist] came into the band and he was a known dude and strong personality, and it became a great band. So it's not a musical problem at all; it's more a business thing where… scheduling and the idea of how to make this work, the time involved, and all the different things. Obviously, I had a lot of stuff on my plate, and it's hard to devote to one thing when these other really good things are happening too. So it was just a mutual thing where… 'Look, I think it's better if you guys continue and get somebody else,' and see what happens. "Actually, [KILL DEVIL HILL] was started at the end of 2009, when I started doing this. You devote four years, almost five years to this thing. And it's, like, 'Wow! What does it take to get this across?' Especially when Rex joined the band. It's, like, people know Rex, people know me. It's not like it's a bunch of new guys trying to make it. And it was, like, 'Wow! It's really, really hard to get this thing off the ground.' It seems to be doing better now. And it comes down to getting people around you that know what they're doing, like record companies, managers, agents and different things. That's a real important part of being in a band. Unless it's an all-star band; then it's easy to go out and do stuff. Like LAST IN LINE is a lot more sellable on this level than KILL DEVIL HILL when it comes to agents booking gigs. That's the way the business works; people wanna see, or hear music that they know. "It's a crazy business right now. Rex and I were shocked that… 'Wow! This is the third tour already, and we're still struggling to get this thing off the ground.'… You're going out and you're making merch money, but it's all going back into keeping this thing alive. There's no tour support, there's no advertising… Where do you advertise? You can only advertise on the Internet, really; there's no more [print] magazines. And even then, it's hard to get a budget for advertising. Videos… You do videos… Basically, it seems like you just need somebody that does social media that you just hire 24 hours a day, every day, 16 hours a day, get on the Internet and get it everywhere. That seems to be the way to do it."
04 min read

Manos SpanosMarch 12, 2014
KILL DEVIL HILL has parted ways with legendary drummer Vinny Appice (BLACK SABBATH, HEAVEN & HELL, DIO, LAST IN LINE) and has replaced him with Johnny Kelly (TYPE O NEGATIVE, DANZIG, A PALE HORSE NAMED DEATH). "I'm really excited about coming on board with KILL DEVIL HILL," says Kelly. "I've been a fan since their debut and have known the guys for a long time. It's also clear that I have some really big shoes to fill. I'm ready for that challenge as I prepare for KILL DEVIL HILL's next chapter. This is gonna be a blast!" KILL DEVIL HILL will play their first shows with Kelly behind the kit April 4-6, three warm-up shows before embarking on an Australian run with KILLSWITCH ENGAGE. More expansive North American dates will be announced shortly. Adds KILL DEVIL HILL bassist Rex Brown: "We all have a lot of love and respect for Vinny and have been honored to have jammed with him over the last few years. We wish Vinny well with all his future endeavors, it has been a blast!" "It's been a great musical adventure from the beginning, but the time has now come to go our separate ways and continue to make music that we love," says Appice of his decision to leave the band. KILL DEVIL HILL's sophomore album, "Revolution Rise", sold around 2,150 copies in the United States in its first week of release. Released on October 29, 2013 via Century Media Records, the CD was produced by KILL DEVIL HILL and Jeff Pilson (DOKKEN, FOREIGNER, DIO) and was mixed by Jay Ruston (STONE SOUR, ANTHRAX, STEEL PANTHER). The cover artwork was created by Sam Shearon, who has previously worked with ROB ZOMBIE, IRON MAIDEN and FEAR FACTORY, to name just a few. Said Brown of the new album: "This new KILL DEVIL HILL record is definitely one of my favorite moments of my career — it's got balls, great melodies, awesome guitar riffing and a low end that'll set your ass on fire!" killdevilhillapril2014shows killdevilhill2014lineupmontage
02 min read