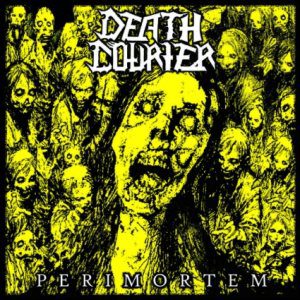 Let’s go deep into the old school Greek extreme metal underground: remember a band called Death Courier? One of the oldest bands of the Greek Death metal scene (starting back in 1987) releasing the well known demo “Necrorgasm” (1991) and the first full length album one year after that called “Demise” (1992). They disbanded after that but they came back with new members and the oldest man Bill on bass/vocals with a new album including material from previous releases and stuff not completed during the early days of the band.

The album starts thundering with “Feeding The Abyss” showing strong influences of Morbid Angel and the necessary Thrashy elements to break the blasting inferno putting a smile on the listeners face. Then comes “Worman” blasting again interrupting for a bit of midtempo Thrashing between verses showing some disarmonic parts towards the end. The massacre continues with “Deprive The Deceased” one of the best tracks of the album Thrashing through the listeners ears after a blasting intro, a kick ass chorus followed by a solo reminiscent of Death or Pestilence and indicating some keyboards wisely put to intensify the darkening feel of the song. “Mindwarp” comes up next ripping with some of the best lyrics of the album dealing with the issue of limited knowledge of young people and brainwash tactics used in institutions and schools. Musicwise is a Death/Thrash tornado done the old school way with a groovy part just before the end. “Devour The Moment” features more blasting and groovy parts and a small lead before the final blastbeat part.

“The Rostov Ripper” deals with a favorite Death metal subject: serial killers. This time around Andrei Chikalito (as mentioned in the final lyric of the song), his story being briefly told in blastbeats, Thrashy and groovy parts balanced within the song including a sick melody as an outro. “Necrorgasm” comes up next as a raging midtempo Thrasher then starts blasting till the middle where we have a more old school Thrashy passage before the final blastbeat part. One of the oldest songs of Death Courier (the title of one of their demos as I can recall). “Spontaneous Human Combustion” is another track balancing between groove and blasting including a really groovy chorus. “Relics And Ornaments” ends the album with some more blasting and groovy moments then moving into an amazing solo towards the end over a completely old school Thrash part back to a final blast and an sample outro as if taken from a horror film. Death Courier made a kick ass and addictive Death/Thrash record, catchy and fast just to keep the fans playing it time and again. Hats off to the old school and for those who did not manage to see them live at the Brutality Over Sanity festival on May, DO IT WHENEVER YOU’RE GIVEN THE CHANCE. Two words: just killer!