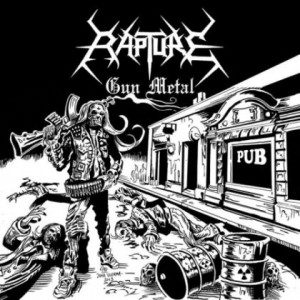 Rapture are an upcoming band willing to claim their share in the Greek Thrash metal scene. Founded in 2012 this is their first effort called Gun Metal. The EP kicks in with “Killing Desire” showing the early Megadeth/Exodus influence on a track made to open circle pits with some really good riffs and solos. “Rise Of Corruption” kicks in with a bass intro and a groovy Slayeresque riff then back to more Exodus-styled riffage including some really good soloing as well as potential for something greater in the future. “Roots Of Evil” begins with a kick ass riff that reminds me a bit of Municipal Waste with the ever-present Megadeth feel on it and that old school Thrash rhythm throughout the song including some solid solos (yep really good work is done on this department). “Raptured” is an instrumental track showing some Violator influence on its initial riffing, maybe some Sadus as well, indicating that maybe the band should consider moving towards that direction. After that there is some headbanging riffage reminding us of Sepultura‘s mindblowing rhythms only to end just the way it started.

Its overall a good effort but here are my complaints: the vocals needed more work to bring out 100% of the feeling described in the lyrics, the drums need to be higher in the mix and more natural sounding (especially in the beginning of “Killing Desire” I was looking for the drummer until the fast part kicked in and things got better). Also the band should just work on a tighter overall performance as I feel I wasn’t given 100% of what they’re capable of. Things seemed a lot better in a recent live shows I’ve attended to in terms of tightness so I can only expect them to bring the energy and the performance level of the live show in the studio in order to produce a result that does them justice. The riffs are there guys, just work on them.