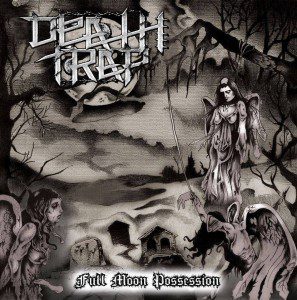 Death Trap (with a name deriving from the undisputed Destruction classic off “Infernal Overkill”) are a Heavy/Thrash metal band from Athens, Greece making their first steps as a project of Michael Skliros from Endless Recovery (“Thrash Rider” kills), Johnie Panagiotidis from Carnal Dread (waiting for the “Black Thrashing Rites” record) and Humanity Zero, Ilias Bekas (ex-Revenge, ex-Erase and also the member who had the idea to start this band) and George Kanellopoulos from Over-Throw (check out their “Against All…” demo).

Their first attempt is “Full Moon Possession” as a 7″ EP. What we have here is 2 killer songs and an intro in the vein of the early Destruction, Sepultura and Sodom days, the intro being called “Sepulchral Whisper” that reminded me of “Total Desaster” (Destruction) or “Bestial Devastation” (Sepultura) and the other two being “Full Moon Possession” starting with a Destruction-esque scream by Michael Skliros then ripping fast old school way and “Bestial Worship” with its great mid-section Slayeresque riff leading to a rockin’ solo (I sense Mantas from Venom smiling with that one!) and awesome chorus.

Great first step, waiting for more of them to follow! Support this band you won’t be disappointed!