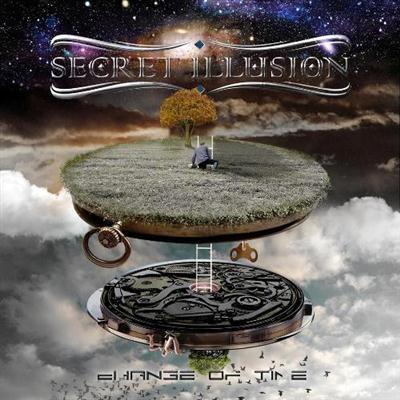 Secret Illusion is a Greek power metal band formed in Athens Greece in 2007. It’s a fresh band, a new member in the family of metal music. They started with their demo, ”Silent Voices’’ in 2008. After that, “Illusion” was their first full-length album which was released in 2011. In 2012 followed two EPs; “Point of No Return” and “Turn Back Time”. “Change Of Time” is their second full-length album, which was released on March 17th, 2014. The themes that appear in their lyrics are taken from life and personal struggles.
The first contact with the new album of Secret Illusion gives you the impression that you will listen to a great album; a nice instrumental opening with synthesizer, orchestral parts and a feeling of old power metal glory. But, after the 1:52 minutes of “Northern Lights”, things change. This change is not that bad, especially when we discuss on a band at its first steps. It’s caused by details such as singer’s pronunciation, the extended use of keyboards, a female voice somewhere and…A child choir. Really? Well, I have to say that while I was listening to “Winter Poem” and, later, to “Winds Left Forgotten”, I thought that all the children were trying so hard to be heard. What I want to say is that at those minutes, in both songs, singer’s voice and music were very loud. They almost covered the whole chorus.
Back to the beginning, the second song was “ Born Once Again”. The song contains a powerful opening, great guitars and drums playing. But I feel like it’s something’s missing. And I’m not very happy to say that this is the passion from Dimitris’ voice though I believe that he tries very hard for the best result (everybody who listens to power music knows the standards of voices). And there’s a small problem with his pronunciation. Even if this is just a detail that can be fixed, it’s very important for the good image of the band. Also, sometimes I feel that he sings higher than he can, like he pusses himself, with one breath. To continue with, “Point of No Return” is an interesting song, which begins with sounds from an airport. I really liked it, but I admit that there was an excessive volume control for no reason.
“Perfect Fantasy’’ left me indifferent except from the amazing solo at the last part of the song. “Beauty Queen” was, for me, the best song from all. Everything was balanced almost perfectly; the sound, every instrument, the chorus, and, finally, Dimitris’ voice which sounds much more melodic and professional. I loved it, and at somepoint it reminded me the “Black Diamond” of Stratovarius. Returning to “Winter Poem”, along with the things I pointed at the begging of the review, I want to underline the fact that it’s not a bad song. It could be a beautiful ballad, though, if there was no use of the child chorus and the female voice was more intense. I also liked the second instrumental track of the album, “Change of Time”; soft, sentimental and powerful music at the same time. It brings out a lot of good characteristics of the band, and once more, guitarist’s skills. “Love Lies” is a song singer’s voice, unluckily, doesn’t fit very well to the song, and the problem of pronunciation still exists and gives a bad impression.
“Words Left Forgotten” is the last song of the album. I have to say that it confused me. There were many changes, from the start to the end. The opening brings out something nasty, with a good meaning of course. The use of keyboards could be more limited and the child chorus… Ahhh…Why? You can barely listen to it, because Dimitris sings over it. The final part it’s beautiful, with the sounds of piano, sea waves and a voice. Literally, this song was like two different songs were put together into a blender.
“Change Of Time” is an album with good elements and weaknesses. The members have to fix the “holes” the soonest they can and maintain every good characteristic of their music. There’s a potential which need to be seen and heard, and this will be achieved through serious work.