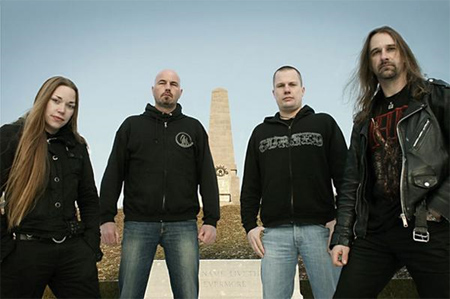 The ninth studio album of Netherlands God Dethroned “Passiondale” is a fact. On the other side of the telephone, is the female guitarist Susanwho talks about the new album, the upcoming tour and many more.

God Dethroned are back with a new album and I have to admit that I liked it very much. Can you tell us what the band is actually doing these days?

We released the cd almost a month ago and we are very busy at the moment with our cd’s presentation, which will be tomorrow and we’re very excited at the moment.

How do you feel being the only woman in the band?

It doesn’t matter to me. I mean I’m used to it. I’ve played for fifteen years now and I know that there are not that many women in this kind of music anyway. To be honest I prefer hanging around with guys than girls, so for me it is ok. And all of them are laid back and relaxed, so that’s really good.

Let’s talk about the recording part. You recorded at Sound Lab Studios in Germany.

Exactly! I wasn’t involved in the recording part though, so what do you want to know from my point of view?

Are you satisfied with the final result?

I started with the band when they had already recorded everything and we were in the process of mastering the cd, but what I got from the other guys was very well set and organized. So, yes, everything was very good and from what I know, from what I was told, is that the band really liked cooperating with the people at Sound Lab. We also know what they did with the previous cd and we’re very satisfied with the final outcome. It sounds very clear and yet still brutal, so yes, we’re really happy with that.

Yes, I also love the sound of your cd. It’s very good. Well, what about the lyrics? Is there a whole concept behind that?

Yeah, definitely! You probably know that the new cd is called “Passiondale” and it’s about a small village called “Passion Dale”. The cd’s concept is about World War I, the Great War, and all the songs there were themed around World War I. The lyrics that Henry wrote were about the cruelty and the atrocity of that war and all the casualties that it left behind. 900,000 people died in the area of Passion Dale alone, so it was really horrible. So, the theme behind the cd is World War I and the cruelty of that war. 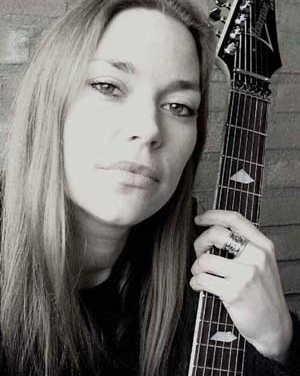 And the music is really aggressive!

Yes, that’s true. The previous cd’s music was much more aggressive though!

That’s true. Well, do you think that the fans of God Dethroned have changed through time in terms of attitude?

Yes, I guess so; that might be the thing… Which album do you prefer; The previous or this one?

I prefer this one. Definitely!

I can’t explain why to be honest. It’s just better on my ears…

Ok (laughing). So, to get back to your question, I think that is the case. People have definitely changed. As you probably know, we asked people to listen to the new cd online before it was even released and we received such a positive reaction and people were so happy about our turn. There were people that didn’t like “The Toxic Touch” very much and now with “Passiondale” we got them back. They returned to the band actually, while they weren’t into “The Toxic Touch” that much. So, you can say that the group of fans has changed slightly…

If you were to make a comparison with the older God Dethroned albums, what would you say the differences are?

Well, every album is different and this is exactly what the band wanted to do from the beginning. They never wanted to make a new album that sounded exactly like or very much like one of their previous albums. So, I think that this is really good! It’s good that every album sounds different. As far as I’m concerned I really loved the new one and I really love “The Grand Grimoire”. No album is the same and that’s a strong side of God Dethroned. 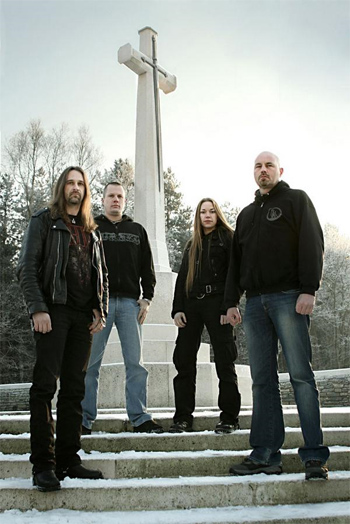 What about touring? What are your plans?

We have scheduled a tour for late June. We are going to Croatia, then Slovenia and also Greece.

Yes, we are waiting for you here in Thessaloniki!

Good! That’s good! (laughing) So, after that we have scheduled an American tour in September for about three weeks and after that we’re going to Canada in October and then we’re returning for a European tour. I don’t want to say much about that, but it will probably be some time in December.

I believe that there is also a vinyl and a digi-pack version of “Passiondale”. What can you tell me about that?

Well, the digi-pack version is absolutely brilliant! It’s a double cd version of “Passiondale”. The vinyl is also really-really good and I believe that it’s a collectors’ item as well. We printed 666 copies only and it’s great; it looks like white marble so it’s absolutely great!

Are you planning to shoot a video clip soon?

We are already working on that. We have shot some footage for the video clip, but we’re thinking of shooting some live footage as well tomorrow from our cd’s presentation, so we’re going to blend that all into one or two video clips; we’re not sure yet, but at the moment we’re working on that as well.

Are you satisfied with your cooperation with Metal Blade Records?

Yes! Absolutely! I mean they do a lot of promotion and the good thing is that they are not active only in Europe, but also in America, so we’re definitely satisfied about that.

I would like to ask you about your opinion about myspace. Many people think that it unites musicians with fans and other people under music. Do you agree?

I think that myspace is a good thing. You get to contact with the fans and the band and the fans have never been so close! I don’t know how long you have been in music but I’ve been in the scene for over twenty years and in the past when you wanted to contact a musician you absolutely couldn’t! You had to send a letter and most probably you wouldn’t get an answer back. Or even when a musician would decide to answer back to a letter it would take too long! Internet and myspace is the future! It’s brilliant! Everyone can hear your music right away and they can see your picture, your biography… They can see everything in a blink of an eye. We always try to reply to all the messages that we receive and people like it. Whenever I write back to people they thank me for doing so. And many times I don’t have time to answer straight away, but I always try to do so even after a while.

Yes! Promoting your band has never been so easy! Everything happens in seconds now and that’s really good!

Do you see any differences in the metal scene in general today in regard to the past?

It’s obviously different, but it depends on which aspect you’re referring to. As I said before, in terms of communication, nowadays with the internet things are definitely better than in the past. On the other hand, in the past there were fewer bands and the quality was probably better, because nowadays there are so many bands and particularly unsigned bands, which may be even a good thing, but the number is so great that it’s very difficult for a new band to get their material heard, to promote themselves and to stand out of the rest. It’s really hard to get noticed!

Have you ever come across people, who disagree with the band’s name? Do you think that these people constitute a problem for the band?

Over the past twenty years there have been occasions when people complained about the name of the band and they were so upset about the name of “God Dethroned” and the concept behind that name. I don’t think that this might create any troubles. As long as there is freedom of speech, especially in Holland, that will not be the case. I mean that freedom of speech is so important. If we want to call the band “God Dethroned” we are free to do so and people are free to pose their objections, but in the end they will have to cope with that. We’re not Satanists and we don’t do anything weird; we’re just normal people and we love music and we love making music. Other than that, death metal should be a little bit shocking. When we started the band it was different, but now we’re adults and we just want to make good music. And the band sounds great and we have a great logo, so I don’t know why it should pose any problems… People who disagree don’t have to listen to our music and they don’t have to look at our name. They can just look the other way… It doesn’t matter. 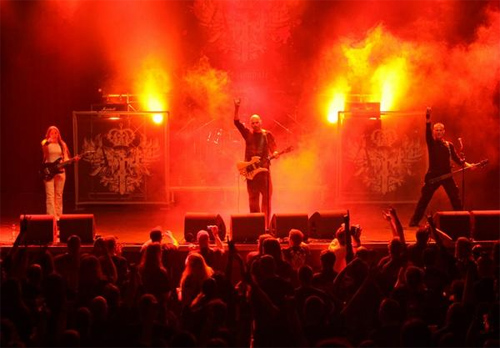 I agree with you. Freedom of speech is very important! Can you tell me a few things about Cold Blood Industries? I think that they offer another release of “The Cristhunt” with the original cover.

It was a label run by Henry and another associate of his. They released many albums from the metal genre. I can recall “The Wounded” but I can’t remember any other bands. Well, they had this label for a number of years. I’m not sure how long ago that was; I think it was somewhere between four and six years ago when they had to leave that label, because simply they couldn’t make a living out of it and that’s what they wanted to do, so I guess it just didn’t work out very well.

I read an old interview and someone from the band said there that Henry shot a rat, cut it into pieces and took pictures of it. Is that the rat on the cover?

Yes, exactly. That was for “The Christhunt”. He dissected the rat, that’s true. But eventually they didn’t want to use it for the cover and they used something else instead, but I don’t know what for sure. If you take a look at our myspace page the picture of the dissected rat is still on there! (laughing) But that was many years ago, he doesn’t do that any more! (laughing), he was younger then. Now he’s all grown up and matured.

Can you give some advice for the new bands? How can a new band get a label and reach your level of success?

That’s very hard; definitely, really hard nowadays. As I said before, you need to have something to stand out from the rest. That’s one thing. The other thing is that absolute persistence is needed. You have to be willing to try and try over and over again. You have to promote yourself in any way possible, cause in order to be famous you need several years. So if you’re starting now, try to be creative and do something special. And you also need some luck, to be honest. You need to know the right people and be lucky!

Are you planning on writing new material perhaps after the tour or soon?

To be really honest, we haven’t talked about that at all, ‘because we’re really busy on promoting the new cd and all…

Ok Susan. Would you like to close this interview with a message to the readers of Metalpaths?

Thank you very much for this interview and to the readers: please check out “Passiondale”!

Thank you Susan and we’ll be waiting to see you in Thessaloniki.